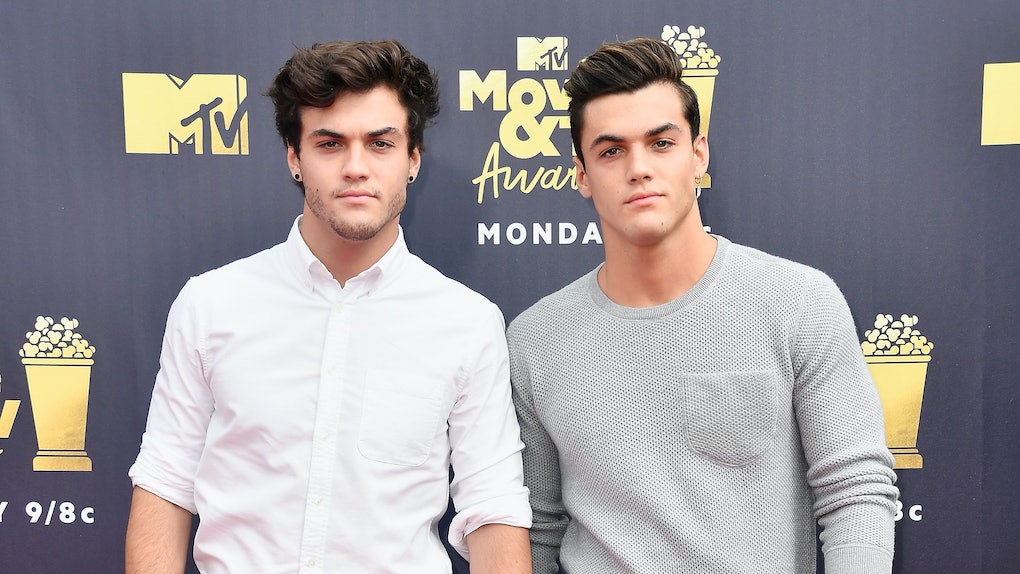 YouTube celebrities and twin brothers Ethan and Grayson Dolan are mourning the loss of their father who died from cancer in mid-January. The famous brothers took to social media to give their fans an update on how they're feeling and share thoughtful, loving messages in tribute to their dad. Ethan and Grayson Dolan's Instagram tributes to their dad are so heartbreaking and fans are showing their full support.

According to reports and a video posted by the brothers titled "You're Not Alone," Ethan and Grayson's father was diagnosed with cancer in 2016. At that time, the boys explained to fans how much of a shock it was to hear the news and how their intention was to double down on spending time with their family while simultaneously embracing their own health. They also sent out a call of support to any fans going through something similar, letting them know they weren't/aren't, in fact, alone.

Their Instagram tributes to their father echo this wise perspective on loss in the form of written letters to their dad. Ethan said he wanted to share his letter to help people understand "what an amazing person he was." His caption began, "Dad, you were so much more to me than just my Dad. Although we were only granted 19 years here together it feels like we’ve spent a million lifetimes together."

Ethan also wrote about how strong his father was and how much of an impact that had on him. "You are the toughest man that I will EVER know. The pain you endured, physical and emotional, throughout your entire journey that you prevailed through is indescribable and I admire you so much for pushing through without a single complaint. You are the strongest man I will EVER know," he said.

The sacrifices you made for your family throughout your journey could not be done without prodigious courage. You always put others first even if it meant the worst for yourself. You are the sweetest most caring man I will EVER know. The consideration you had for everyone and anyone is truly heartwarming. You were a father figure and friend to all of my friends too. I could go on for eternity, I really could. When you were very sick you told us, “This disease may get my body, but not my mind and not my heart. As long as my heart is beating I will still be fighting.” That is exactly what you did Dad. That is something I will always remember when faced with adversity. You fought the hardest fight. Cancer may have taken your life but with the strength and dignity you showed, and the inspiration you left us with, you won the battle Dad.

Grayson echoed very similar sentiments in his own letter, writing to his father that he missed him "so f*cking much" and that every lesson his dad taught him will stick with him forever. He spoke about how his dad never missed a sporting event, show, or tour, and never "left his corner" even after his diagnosis. "You’ve changed the lives of so many people for the better," Grayson said.

All of your students, teachers, friends, and family will never forget how great of a man you were, and how special you made them feel. You raised me into a man for the past 19 years, but I can honestly say that I’ve learned the most from you in the past 2 1/2. Two and a half years ago you were diagnosed with this bullshit and you never let it fade you. Not once did I hear you complain about your condition. You held your head as high as you physically could and fought on and on until you won that fucking battle. When the doctors said you only had a year to live after being diagnosed, you push and battled for 2 and 1/2 years!

Heartbreakingly, Grayson also talked about his father's last few days. "Last week when the doctor told us you had less than a week to live you stood your ground and stayed with us for a week and an extra day. That alone shows the type of man you were, a fighter," he said.

You never let cancer fade you Dad, it may have taken your body, but your heart, your mind, and your soul came out victorious. Congratulations Dad. You won. Look down and see your reward. The lives you’ve changed and people you’ve impacted so deeply. You’re the man. I love you Dad.

Both boys announced they would be taking time away from social media to be with their family. Grayson wrote he couldn't believe "today (is) actually real" and Ethan said, "life feels like a nightmare."

Fans are showing their continued support in their comments by wishing their main guys all of the best as they mourn their loss.