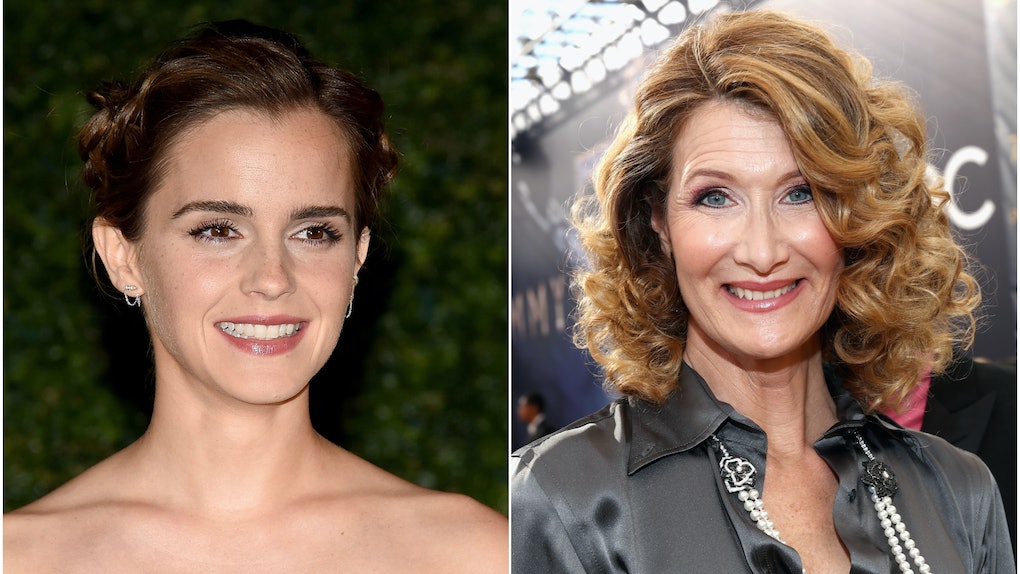 Can you feel emotional about a movie that hasn't even released a trailer or official photos yet? Emma Watson recently upped moviegoers' interest in Greta Gerwig's upcoming Little Women adaptation when she posted a Twitter photo of herself with Gerwig, the actresses behind her fellow March sisters, and Timothée Chalamet as the girls' typical boy next door. Now Watson has uploaded the first look at the family matriarch, Marmee, as portrayed by one of Big Little Lies' most memorable mothers. Emma Watson's Little Women Instagram with Laura Dern is sweetly subtle, and the March family Christmas card is one I wish I had in my mailbox ASAP.

ICYMI, Watson released a posed photo last week of the main Little Women cast with director Gerwig, best known for her work on Lady Bird. Louisa May Alcott's Civil War-set novel following four sisters coming of age is no stranger to the big screen, and among its many TV and film adaptations is the popular 1994 film starring Winona Ryder and Christian Bale. Gerwig's version, slated for a Christmas 2019 release, is sure to deliver a feminist flair that other interpretations have captured, but perhaps it will have a particular focus on women's rights that only a female director in 2018 could fully develop.

Watson's photo caption also confirmed the group's individual roles, announcing herself as oldest sister Meg and Gerwig-ian muse Saoirse Ronan as aspiring author Jo. Florence Pugh will star as Amy, the baby of the family, while Sharp Objects actress Eliza Scanlen plays shy and sweet Beth. Ronan's Lady Bird co-star Chalamet also appeared in the photo as Laurie, the Marches' neighbor. Watson, who joined the production after Emma Stone's promotional commitments to The Favourite prevented her from starring, has now shared a photo of herself and Gerwig with Laura Dern, who plays the sisters' beloved mother, Marmee.

Although Dern's face is away from the camera, she's clearly dressed in period attire, fitting the mold for a matronly woman in the 1860s. The character has also been praised for her feminist leanings in previous screen adaptations, so here's hoping Dern's portrayal follows suit. Meanwhile, Watson appears caught up in directions from Gerwig, who's clearly laying out a plan for a scene. It's not as revealing as Watson's previous pic was, but perhaps this second behind-the-scenes photo means that a full family picture is on its way. Perhaps Watson has a Christmas present in store for her followers?

The Little Women adaptation also includes several other actors that have yet to appear in Watson's artsy, heartfelt pictures. Meryl Streep stars as the family's cantankerous Aunt March, while Better Call Saul's Bob Odenkirk has an unspecified role according to the film's IMDb page, although we could definitely expect to see him as Mr. March. French actor Louis Garrel has been cast as Jo's New York acquaintance Professor Bhaer, while Grantchester star James Norton plays Laurie's tutor Mr. Brooke. You could probably spend awhile listing off all of these actors' accomplishments and accolades, and I wouldn't put it past the film to rake in some award nominations for its esteemed cast.

Fingers crossed that Watson rings in the new year with more insights into the production of this film. Little Women is in theaters on Dec. 25, 2019.

More like this
Tom Felton's Instagram After Helen McCrory's Death Honors Their 'Harry Potter' Days
By Dylan Kickham
33 'Mean Girls' Quotes For Instagram, Because You're Fetch & Can Be Salty If You Want To
By Rachel Chapman
17 Tweets About Simu Liu In The 'Shang-Chi' Teaser, From Proud 'Kim's Convenience' Fans
By Dylan Kickham
Stay up to date