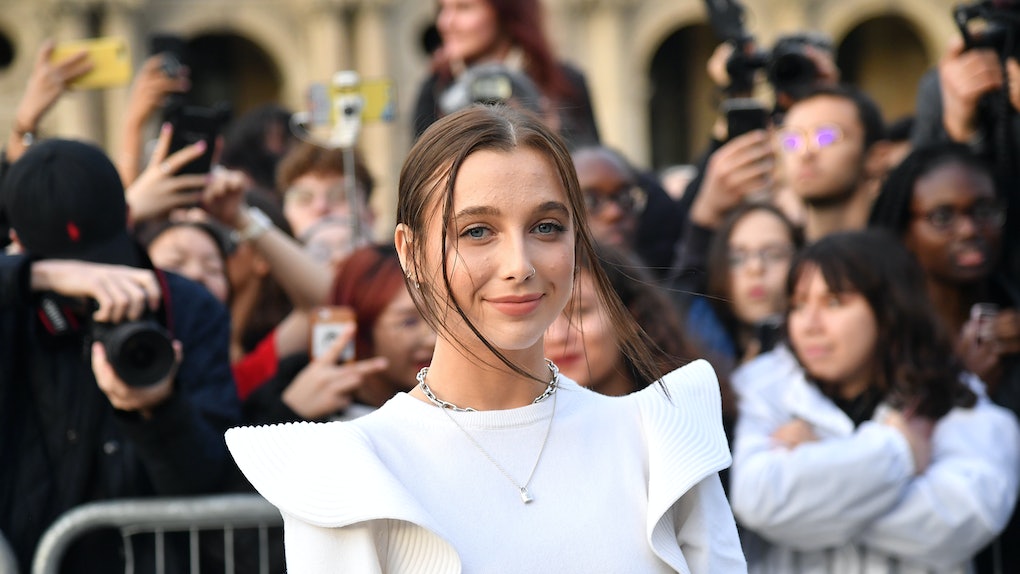 Over six months into the ongoing coronavirus pandemic, and some long-time aspects of the fashion industry still look completely different — including fashion week. Rather than spending her fashion week whisked away to Paris and posing for hundreds of photos, Emma Chamberlain celebrated Fashion Week virtually with Louis Vuitton. And by celebrated, I mean she woke up at a casual 6 a.m. and waited in bed with all 9 million of her YouTube subscribers until Vuitton's virtual Paris Fashion Week show began.

For the past few years, Chamberlain's been invited to Paris Fashion Week through the luxury label. But fans have typically only gotten a few of-the-moment snaps and glimpses as the vlogger runs from event to event, followed by a whole recap vlog after the fact. This season, viewers got a play-by-play of the event from Chamberlain's view from her "virtual" seat. No, really. Louis Vuitton sent her a whole-ass invite, and her "seat" IRL was essentially a camera live-streaming the show to her. Is this that part of the movie when the robots take over? Please advise.

From what Chamberlain showed, the event was classic Vuitton — well-tailored suiting, streamlined silhouettes, and creatively colored and printed dresses. Even more than a look at the show, though, fans also got to peep some of the looks Chamberlain might've worn to the real deal (had it happened), courtesy of the fashion house, of course.

Let me preface this by saying Louis Vuitton sent Chamberlain a sh*t-ton of options, mostly from the brand's Pre-Fall 2020 collection — the dream. Although, she singled out a select few to model. The first look she tried, which she deemed "really cute, but it's definitely a little bit long for me," is a black-and-white checkered dress, with plain black sleeves, a black turtleneck, and a strip of the classic brown LV branding along the center. She followed it up with a similar-length dress, but the second was entirely leather, sleeveless, and embellished with small silver and red studs.

Next, Chamberlain showed off a really cool body suit. Like, so cool, I'm seconds away from going into debt for it. The one-piece features a grey-and-white checkered torso, as well as lavender, white, and LV monogram stripes across the chest area. Chamberlain wore the bodysuit with the black X-Girl sweatpants she was wearing at the start of the video, and that look itself is a whole mood.

The final look, clearly Chamberlain's favorite considering she asked a friend to come over at 8:30 a.m. to take photos of her wearing it, is infuriatingly gorgeous. It's a three-piece ensemble, including a light purple (or light blue, hard to tell) button-down shirt; long, beige corduroy pants; and a cropped, light beige puffer jacket with a micro LV monogram design printed all over it. This, my friends, is the look of fall and winter; I want to wear nothing else for the remainder of my life.

I might still be wearing the same sweatpants I've worn for longer than I care to admit, but this glimpse into Chamberlain's brief moments of luxury might've just convinced me to add a bodysuit to my just-woke-up sweatpants look.