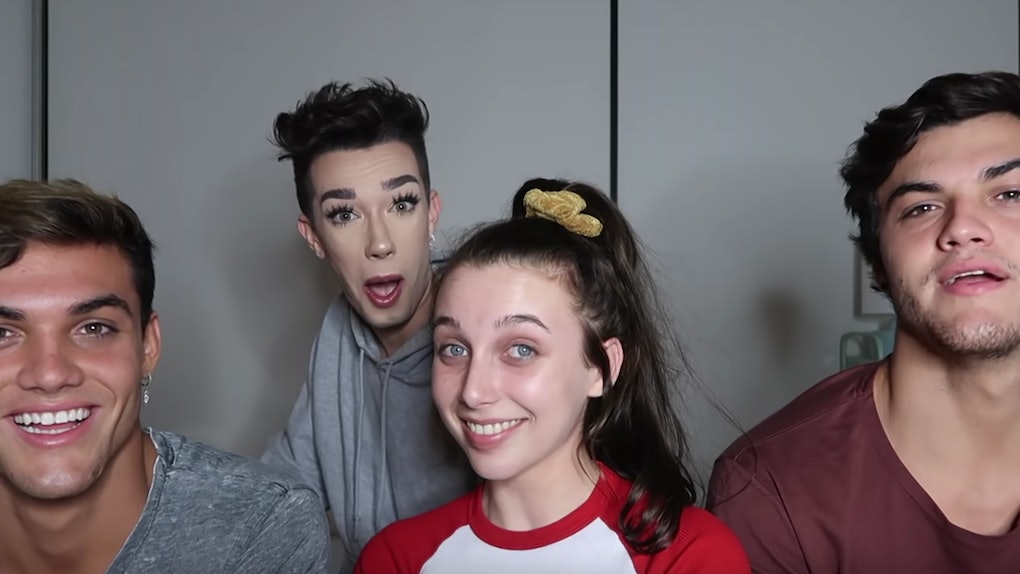 Hi. I'm Jamie. I'm a 29-year-old millennial, and I would very much like to be friends with this gaggle of teenage YouTube celebrities. Full disclosure, I'm slow to the pickup with YouTube celebs most of the time. I know all about James Charles because — hi, sister — I follow his makeup advice like it's my religion. I've only recently learned about the Dolan brothers and Emma Chamberlain, but I'm obviously all in on the full Sister Squad. So, I can empathize with their fans who are shook right now. Emma Chamberlain unfollowed the Dolan twins and James Charles, which is leaving tons of Sister Squad fans shouting, "Sister, what?!" Nobody panic, Chamberlain says it's chill. But also... is it really?

From what I gathered, Chamberlain blew up on YouTube for being charismatic as hell. In almost no time, she landed an agent and shipped off for Los Angeles. Prior to her arrival, she had already connected with Charles who was pals with the Dolan brothers. The rest, as they say, is history. Charles explained in an interview with Xavier Brinkman how the Sister Squad was born. "Me and the Dolans met from me literally leaving thirsty comments on their Instagram pictures, so that was fun because they’re the best," he explained. Eventually, Grayson and Ethan asked him to do their Halloween makeup, solidifying their friendship. As for Chamberlain, Charles says he reached out to her first, too.

"Emma, I met literally through YouTube, she talked about me in a few of her videos and stuff and I had DM’ed her,” Charles said. “She was moving to L.A. so we FaceTimed one night about her moving here, and I wanted to give her advice and stuff and we ended up talking for like seven hours. Once she moved here, her and I worked together, and Ethan and Grayson just came over and thus was born the Sister Squad, the most iconic group ever of YouTube.”

In the one full hour I've given to stalking the Sister Squad today, this is my favorite video so far. It features the gang hanging out in Chamberlain's brand new apartment while Charles and the Dolan twins try to turn her into an "LA girl." It was published in June 2018, which is just not that long ago, ya know?!

Chamberlain recently threw everyone for a whirlwind when she decided to try out one of these super trendy "social media detoxes." (I did it once. It did not work.) While some people might try to avoid social media, for Chamberlain it meant unfollowing, like, everyone. Even her Sister Squad.

In fact, today she is only following 17 fan Instagram accounts and that's it. Of course, people panicked, but Chamberlain insists it's all good in the LA hood. She told fans via her Instagram Story,

A lot of people are concerned that I unfollowed my friends. Don’t worry. I still love every single one of my friends with my whole heart. There’s nothing — we’re good. With all of them. And that’s a genuine promise. … I’m just kind of doing a little social experiment for myself to see what it’s like to just only have my thoughts and not anything else.

She also posted this photo:

OK, fine, but can we get an update from the Sister Squad, please?

More like this
Maren Morris' Instagram About "Snap Back" Culture Slams Unrealistic Body Standards For New Moms
By Brandy Robidoux
Lizzo's TikTok About DMing Chris Evans On Instagram Is Truly Hilarious
By Abby Monteil
Why Did Addison Rae Deactivate Her Twitter? Fans Think This Is The Reason
By Brandy Robidoux
Stay up to date