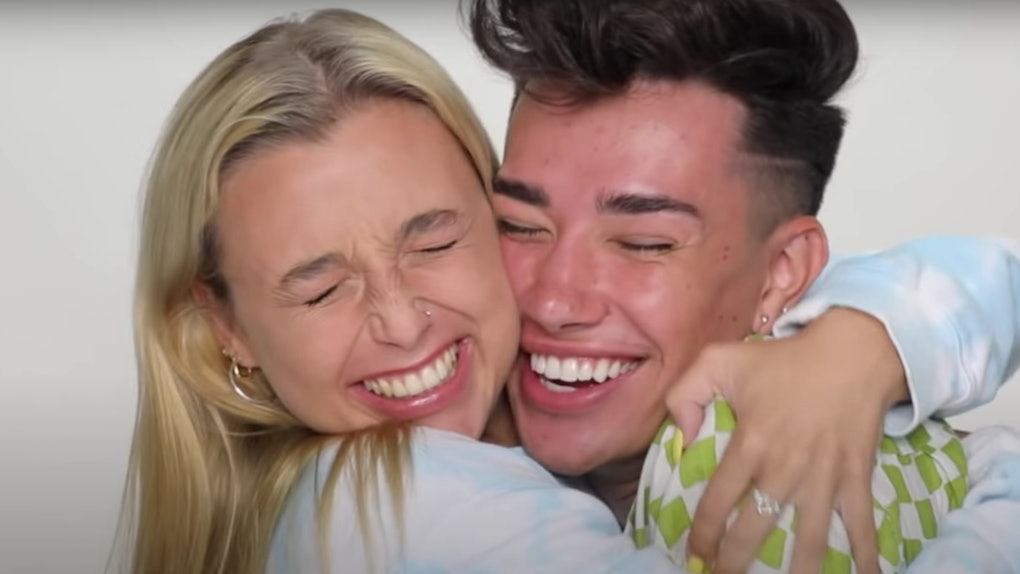 Emma Chamberlain Did James Charles' Makeup In A Video & It's Everything

The year 2020 has continued to unearth an endless supply a things no one ever thought would actually happen, more so than I even do during a particularly bad anxiety spiral, and the next event is actually here: an Emma Chamberlain and James Charles reunion. For a recent YouTube collaboration on both of their channels, the two reunited after a year-long hiatus in their friendship for Chamberlain to do Charles' makeup on her channel and for her to style his wardrobe for a week on his. A partial Sister Squad reunion never felt so good.

For her video, Chamberlain took a stab at doing the beauty mogul's makeup — clearly a challenge for anyone who isn't Charles himself, but perhaps more so for Chamberlain whose makeup routine is decidedly minimal. But honestly, the process doesn't turn out cringe-y in the slightest. Is Chamberlain secretly a makeup guru? Or are we all just distracted by the completely unexpected return of their friendship as they seamlessly pick up where they left off? Hard to tell.

Chamberlain decides to do her own makeup routine on Charles because doing her own makeup on herself on her channel would be "so boring." Unlikely, because 9 million people, including me, would what Chamberlain eat oatmeal for 10 straight minutes, but whatever. Despite Chamberlain's fear of judgment for her potentially "questionable" products, Charles is calm. "As long as you're confident in the end product, that's all that matters." All right then.

Off to a shaky start, Chamberlain forgoes a primer, throwing her initial choice across the room because Charles says it's a "scam" — relatable! She moves on, using a tinted face oil for Charles' complexion and missing, like, half his face on the first go (a big mood for me). She redeems herself as she continues, though, covering most of Charles' face and keeping things ultra simple, á la her own routine. A bit of bronzer here, a little highlighter there. Some mascara and "tingling" lip plumping gloss — you know, all the Chamberlain staples.

The end result is surprisingly not bad. It's soft, glowy, and, as was Chamberlain's goal, Outer Banks-level sun-kissed. Neither has watched the series, but hey, it works. Watch the video above to see the end result and relish in all the goss and glory of this Sister Squad reunion.