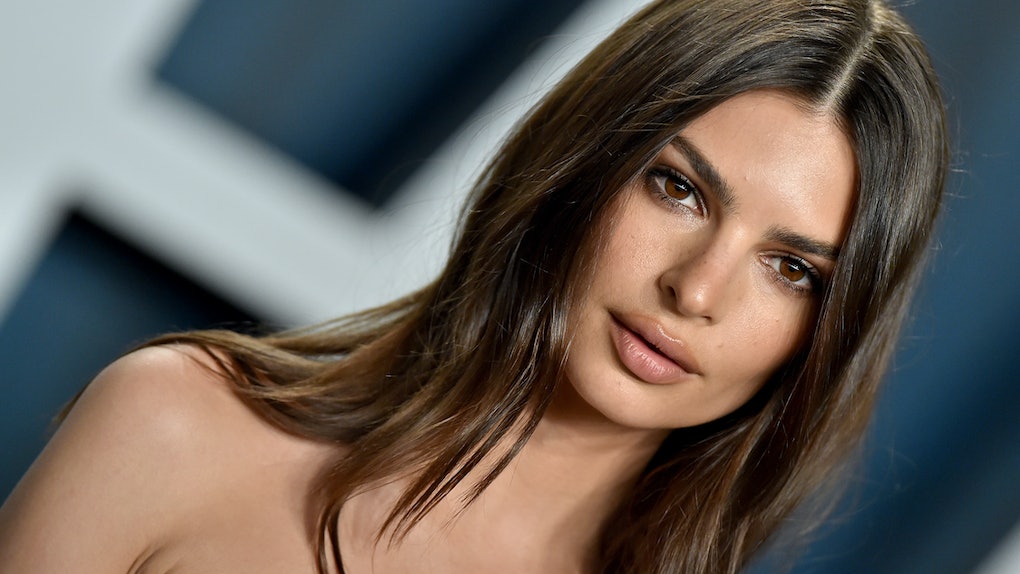 Emily Ratajkowski is one of the latest celebs to share news of her pregnancy in 2020, and her announcement came alongside a super powerful essay about gender stereotypes. The model and actress got real about how she hopes to raise her future children during an interview with Vogue on Monday, Oct. 26, after revealing she and husband Sebastian Bear-McClard are expecting their first baby together. Emily Ratajkowski is pregnant and her announcement is filled with moving quotes about the dangers of constrictive gender norms.

“Who will this person be? What kind of person will we become parents to? How will they change our lives and who we are?" Ratajkowski captioned a collage of photos showing off her baby bump, directing her followers to Vogue's page to read her essay on pregnancy and gender.

The We Are Your Friends star's caption was pulled from the first paragraph of her essay, in which she states she and Bear-McClard's feelings on finding out the gender of their baby. "We like to respond that we won’t know the gender until our child is 18 and that they’ll let us know then," Ratajkowski wrote about her and her husband's response when people ask if they are hoping for a boy or girl. "Everyone laughs at this. There is a truth to our line, though, one that hints at possibilities that are much more complex than whatever genitalia our child might be born with: the truth that we ultimately have no idea who—rather than what—is growing inside my belly."

"I like the idea of forcing as few gender stereotypes on my child as possible," Ratajkowski explained. "But no matter how progressive I may hope to be, I understand the desire to know the gender of our fetus; it feels like the first real opportunity to glimpse who they might be. As my body changes in bizarre and unfamiliar ways, it’s comforting to obtain any information that might make what’s coming feel more real."

Ratajkowski went on to explain that while growing up she always imagined herself having a daughter, now she's not so sure. She recalled trying to live up to her own mother's accomplishments and how at a young age, she had an understanding of how "beauty could equate to power," recalling that she "prayed for beauty." While Ratajkowski said she promised herself and her husband that she'd "never let that be an issue" she also "can’t help worrying," writing,

I still fight subconscious and internalized misogyny on a regular basis, catching myself as I measure the width of my hips against another woman’s. Who is to say I’d be able to protect my daughter from it?

But it's not just the thought of a daughter that put fear into Ratajkowski. "I’m scared of having a son too, although not in the same way," she wrote. "I’ve known far too many white men who move through the world unaware of their privilege, and I’ve been traumatized by many of my experiences with them."

After detailing the stereotypes she's been told about both boys and girls, Ratajkowski wrote:

I don’t necessarily fault anyone for these generalizations—a lot of our life experiences are gendered, and it would be dishonest to try to deny the reality of many of them. But I don’t like that we force gender-based preconceptions onto people, let alone babies. I want to be a parent who allows my child to show themself to me. And yet I realize that while I may hope my child can determine their own place in the world, they will, no matter what, be faced with the undeniable constraints and constructions of gender before they can speak or, hell, even be born.

Ratajkoswki concluded her post by sharing how much she's already learned from her unborn baby. "I’m completely and undeniably helpless when it comes to almost everything surrounding my pregnancy: how my body will change, who my child will be," she wrote. "But I’m surprisingly unbothered. Instead of feeling afraid, I feel a new sense of peace. I’m already learning from this person inside my body. I’m full of wonder."

Ratajkoswki's message is one we can all take to heart, pregnant or not.