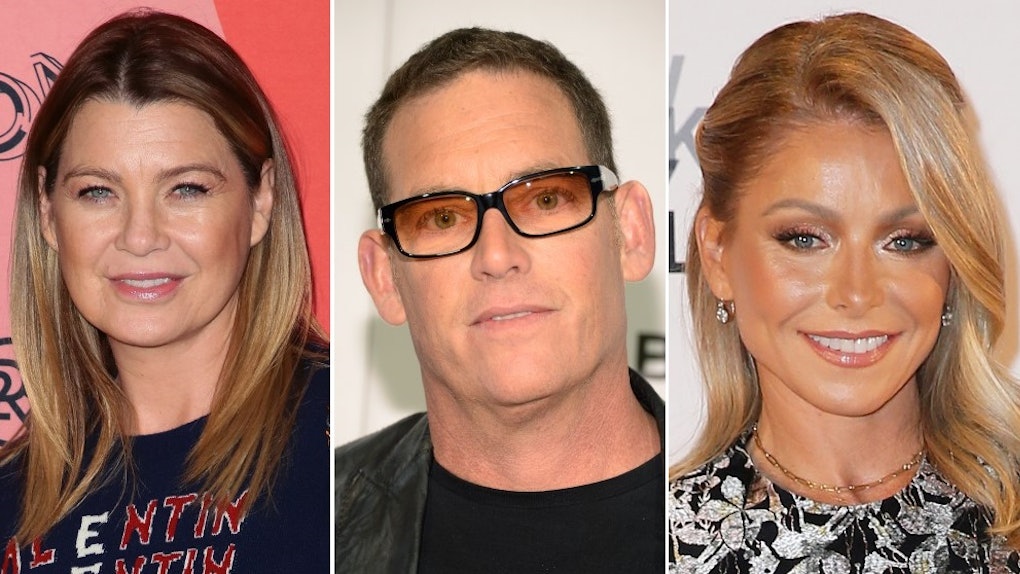 Ellen Pompeo is stepping in to defend Kelly Ripa against Mike Fleiss’ recent comments about the TV host. If you haven’t been keeping up with reality TV news lately, Ripa and Fleiss have both expressed differing opinions about The Bachelor, with Ripa proclaiming that shows like The Bachelor “disgust” her and Fleiss suggesting that Bachelor Nation keeps Ripa’s paychecks coming. Well, Grey’s Anatomy star Pompeo is now getting involved. Ellen Pompeo’s tweet to Mike Fleiss defending Kelly Ripa is pretty fierce. Elite Daily reached out to ABC about Pompeo and Fleiss' exchange, but they declined to comment.

To put all this into perspective, let’s review how it all started. On Tuesday, May 14, Ripa revealed on LIVE With Kelly and Ryan that she wasn’t a fan of The Bachelor series.

"You know how I feel about this show. It disgusts me," Ripa said on the show. "I thought that I was disgusted because I couldn't stand the idea of 25 exceptional women fighting over one, ordinary fella, in my opinion. You know how I feel ladies! We are too special to be arguing over a guy."

And it was this particular comment that set Ellen Pompeo off. Pompeo tweeted Fleiss to say that The Bachelor franchise absolutely does not pay for Ripa’s salary. Which is objectively factual. Ripa has been a staple host on the network's über-successful Live! morning show since 2000. It's pretty ridiculous to suggest Ripa's salary is in any way dependent on another one of ABC's show's success. And Pompeo said as much.

"Okay @fleissmeister... that's some handle bro! Your show does NOT pay @KellyRipa salary," Pompeo wrote in a May 16 tweet. "Also we don't attack successful women on our network and men certainly cannot take credit for their success. Don't get me started on your show cuz I'm a savage.... #bachelorsoooowhite."

Yikes. It seems like Pompeo really didn’t take too kindly to Fleiss’ comments about Ripa. But at least she had Ripa’s back, which I’m sure the TV host appreciates.

In any case, after the exchange between Ripa and Fleiss happened, an insider told People that those associated with The Bachelor weren’t too happy about these new developments.

“It seems the fear of rejection runs deep over there,” the insider said. “Do these guys really want to bring attention to the fact that people should stop and look more closely at the completely outdated misogynistic nature of this show and its offensive premise of demeaning its participants?”

Not everyone feels negatively about the show, though. The current Bachelorette herself, Hannah Brown, expressed some very positive thoughts about it during her appearance on LIVE With Kelly and Ryan on May 16.

"Like you, I didn't really follow the show, wasn't a big fan. But, being a part of the show, it's not women fighting against each other. Really, some of my best friends came from the show and were really supportive. When you have a group of 30 people together, there's going to be people who don't like each other. That's simple facts," she said. "But, ultimately, it was one of the most empowering things that I ever have done because I had to push myself and grow as an individual. And I did. And I think that's why I decided that I wanted to be the Bachelorette and wanted that so bad."

I guess there are always two sides to every argument!