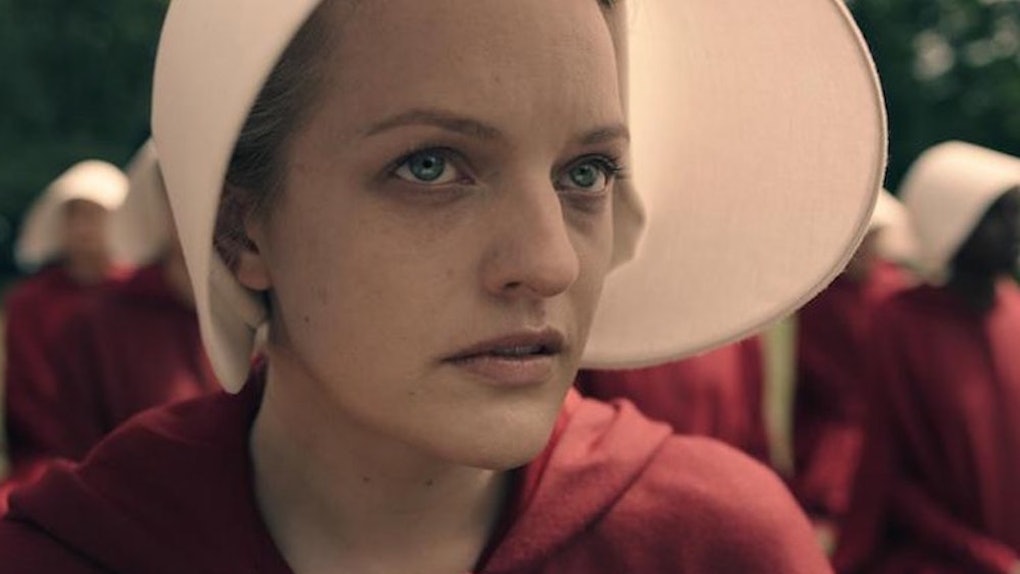 Praise be, fellow TV lovers. The 2018 Golden Globe Awards are in full swing, and this year is overflowing with talent galore in the television categories. We're apparently in a golden age of what they call the boob tube — it's a crowded market out there, guys! — so it's hard to deny that any of this year's nominees aren't deserving of recognition. One major race at this year's awards is Best Performance by an Actress In A Television Series - Drama. And the winner (drum roll, please...) was Elisabeth Moss. And her Best Actress in a TV Drama speech was full of heart, passion, and eloquent words of wisdom, courtesy of Margaret Atwood. Moss quoted The Handmaid's Tale author, saying,

After Moss thanked her cast, crew, team, and mother, she read the above quote and added,

Margaret Atwood, this is for you. And all of the women who came before you and after you who were brave enough to speak out against intolerance and injustice and to fight for equality and freedom in this world. We no longer live in the blank white spaces at the edge of print. We no longer live in the gaps between the stories. We are the story in print, and we are writing the story ourselves. Thank you.

The nominees for Best Actress in a TV drama were Caitronia Balfe for Outlander, Claire Foy for The Crown, Maggie Gyllenhaal for The Deuce, Katherine Langford for 13 Reasons Why, and Elisabeth Moss for The Handmaid's Tale. It was stiff competition, to say the least, but Moss pulled off the major win.

Foy and Moss were the frontrunners for receiving the prestigious honor, considering Elisabeth won the Emmy for The Handmaid's Tale back in September. Foy picked up the Golden Globe for The Crown last year, beating out Balfe, Keri Russell, Winona Ryder, and Evan Rachel Wood. But that was before The Handmaid's Tale stepped on the scene to shake the race up. Moss also previously won a Golden Globe in 2014 for her performance in the miniseries Top of the Lake.

Upon the announcement of her recent nomination, Moss took to Instagram to express her gratitude, writing,

Congratulations to the cast and crew I just spent 16 hours working with on the set of the The Handmaids Tale, on our Golden Globe nominations for Best Drama Series, Best Supporting Actress for Ann Dowd and Lead Actress. To my Top of the Lake family on our Best Miniseries nomination. And to The Square on our Best Foreign Film nomination. To be recognized for 3 different projects is beyond my wildest imagination. Thank you to the Hollywood Foreign Press for recognizing the outstanding achievements of the artists I've been lucky enough to work with in the last year. And thank you to you guys for letting me do what I love most, which is act.

Foy discussed her reaction to the repeat nomination while speaking with the L.A. Times in December, saying,

It’s definitely a surprise. The new season just came out. Last year was such a shock, so out of the blue. And you never know how the second season will go down. I’d have been sort of crazy to expect it. So this is really lovely, really lovely. So kind of them.

Langford, whose inclusion in the stacked category was a bit of a surprise, since her massively successful show 13 Reasons Why didn't garner any other nominations, responded to her nod with a statement. Part of it pointed to her hopes for the show's wider impact:

Most of all, my sincere hope is that the recognition continues to shine a light on so many of the important life issues and struggles we portray in 13 Reasons Why. I’m forever grateful to have been given this opportunity and will continue to work hard to bring dignity, respect, and grace to such a powerful character.

All of the actresses in this stacked category are admirable talents, so Elisabeth was certainly among good company.

We know this isn't a The Handmaid's Tale-specific GIF, but nevertheless.

More like this
Ellen Pompeo's Response To Jesse Williams Leaving 'Grey's Anatomy' Is Emotional
By Cianna Garrison
Why Won't NBC Air The Golden Globes In 2022? Let's Break Down The Drama
By Ani Bundel
Courtney Stodden's Response To Chrissy Teigen's Apology For Bullying Expressed Doubt
By Brandy Robidoux
Stay up to date