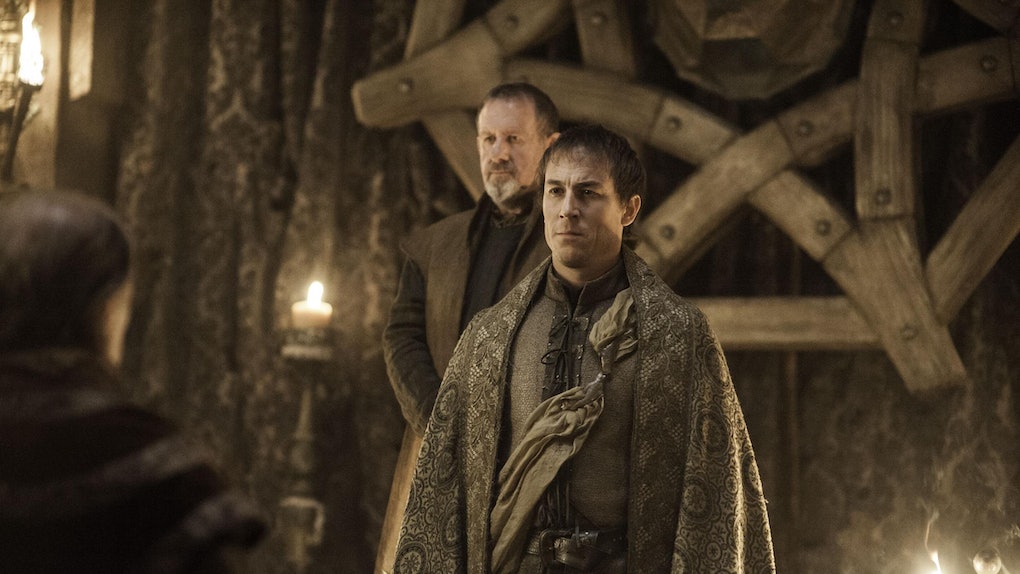 Game of Thrones has been surprisingly diligent about bringing back characters in the final seasons in order to tie up plot loose ends. From Osha and Rickon in Season 6 to a fast Hotpie cameo last year, it seems like everyone in the secondary (and tertiary) cast is getting some sort of curtain call before leaving them off for good. But it turns out there's one character who we won't get to learn the fate of, at least on screen. Tobias Menzies, aka Edmure Tully, won't be in Game Of Thrones Season 8 at all this season, leaving his fate in the Frey dungeons unknown forever.

For those who have forgotten about Catelyn Stark's younger brother, we first met him back in Season 3, haplessly trying to land a flaming arrow on his father's body in a boat for a Viking style burial. Unmarried and incompetent, he was mostly a footnote around Robb Stark's camp, until Robb needed to appease Walder Frey for breaking faith on the marriage bargain his mother made. Frey initially seemed to agree that marrying the daughter he'd been planning for Stark to the Tully heir was an okay compromise.

Instead, when everyone showed up for the festivities, the Red Wedding occurred. Edmure was not killed, as he was off bedding his new bride at the time, but the next morning he found himself a prisoner of the Freys, a position from which he never really escaped.

The last time we saw Edmure was Season 6. Post-Red Wedding, the only other family survivor, Edmure's uncle Brynden "The Blackfish" Tully, raced back to the Tully homestead, locking it down tight, and refusing to move. For the last three seasons, the Freys had been laying siege to the castle just outside the gates, threatening to hang Edmure every morning, unless Blackfish surrendered, and then giving up and going home with him still alive at night.

When we joined said long-running farce of a siege, already in progress in the latter half of Season 6, Jaime arrived to break it with the Lannister army. But rather than fight a battle and kill a lot of people, he put a stop to this "Let's pretend we'll murder Edmure" pantomime, and convinced the younger Tully to agree to open the castle to the Freys if they gave him up as a prisoner.

Edmure agreed, betraying his family for good, but saving a lot of lives and bloodshed in the process. For his trouble, he was once again put back in the Frey dungeons. Fans hoped in Season 7, Arya might pop downstairs and free him on her way out the door after the "Red Wedding Part 2," but no such luck.

As far as anyone knows, including actor Menzies, he's still there.

Speaking to DigitalSpy, he admitted:

The honest answer is, I have no idea. He’s obviously somewhere in a prison, he’s still around alive somewhere. They’re pretty stingy with their information and I’ve not heard anything from them. I feel like they have so many stories to tie up, whether that’s a story they’ll want to go back to, I don’t know.

But with filming already half over, it seems like the show is not getting back around to him. And now, Menzies probably won't have time to pop by for filming a scene anyway, as he is slated to start filming for Netflix's The Crown Season 3 as the newer, older, and probably not much improved Prince Philip at the beginning of the summer. At least that should take the sting out of being one of the few loose ends that will remain that way.

Game of Thrones Season 8 will mosey on over to HBO sometime in 2019. The Crown Season 3 is expected to arrive on Netflix around the 2018 holiday season.

More like this
This 2021 'Game Of Thrones' Season 8 Trailer Is So Confusing... & So Good
By Ani Bundel
'The Falcon & The Winter Soldier' Quotes For Pics With Your Marvel-ous BFF
By Rachel Chapman
25 Quotes From 'The Irregulars' For Your Dark & Mysterious Selfies On Instagram
By Rachel Chapman
Stay up to date