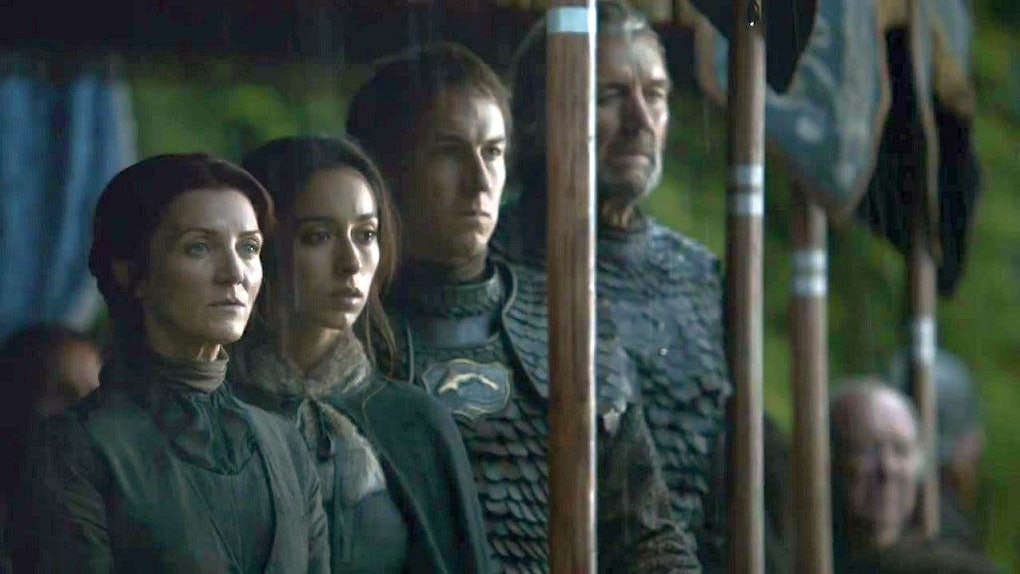 Edmure Tully Will Be In 'Game Of Thrones' Season 8 Episode 1, Here's What That Means

With the passing of Valentine's Day, there are officially less than two months to go before Game of Thrones final episodes premiere. For most, this means it's time to start the rewatch in earnest and start doubling up on episodes to finish all 67 installments before mid-April. But for those who cover the series, this means the long-range TV schedules have the first episode prepped to go live. Using the episode's unique URL, fans have found a cast list, and to everyone's shock, the actor who plays Edmure Tully will be in Game Of Thrones Season 8 episode 1.

This revelation has been a bit of a shock to fans. Tobias Menzies, who has played the hapless Edmure Tully since Season 2, was asked if he was working on Season 8 last year and responded in a way most took as negative. To be exact, he said he "had no idea" if he'd be in Season 8, which most took to mean he wasn't contacted to film anything. Not yet, anyway.

However, it seems like the real interpretation should have been "I filmed footage, which may or may not air." As to what the scene is, another surprising name, Lino Facioli, may hold the answer.

Lino Facioli plays Robyn Arryn. With Littlefinger now removed, Lysa's son Robyn is officially the one in charge at the Eyrie, with no one claiming to hold it in his name until he comes of age.

Likewise, the strategic removal of all male Freys from the face of the earth by Arya at the beginning of Season 7 means Edmure Tully is now free to retake his rightful position as the heir to the Tully estate at Riverun. (There was quite a bit of debate last year if Arya went downstairs and released Edmure before leaving.) Not only that, but his marriage to the Frey daughter at the Red Wedding means he's also the only male relative with a claim to the Frey's holdings at The Twins. In short, Edmure Tully's survival leaves him in a dominant position vis a vis the Riverlands.

So why bring either character back now with time so short? Game of Thrones likes bringing back characters to tie up loose ends. However, Arryn and Tully aren't just "loose ends." They represent two out of the Seven Kingdoms and combined with the North make up nearly half of the continent. Both Cersei and Daenerys would like their pledges, but one person holds more sway over both than either queen: Sansa.

The show may have cut the plotline where Sansa gets engaged to Robyn for a short spell, but she's still his cousin, and she can sway his impressionable mind. Also, unlike Jon Snow, who was never Catelyn's son, Sansa is her mother's daughter. She can push Uncle Edmure in whatever direction she pleases. The Lady of Winterfell doesn't just rule the North. She controls the North East and the Riverlands, via her relations. Daenerys would be wise to treat her with respect.

More like this
This 2021 'Game Of Thrones' Season 8 Trailer Is So Confusing... & So Good
By Ani Bundel
The 'This Is Us' Season 5, Episode 14 Promo Teases Another Beth Story
By Ani Bundel
What Happened To June In 'The Handmaid's Tale' Season 3? Here's A Recap
By Ani Bundel
Stay up to date