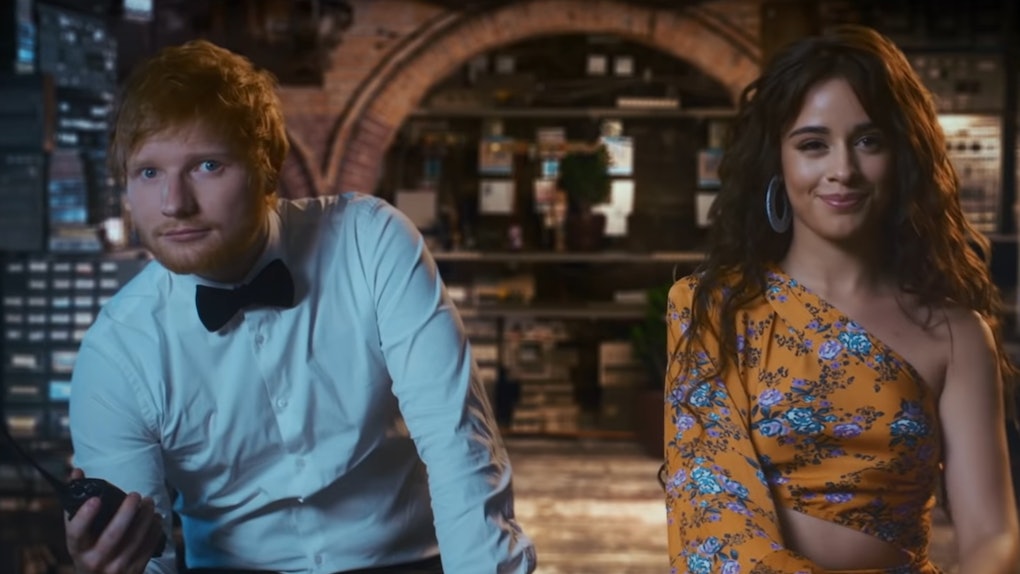 Ed Sheeran's No. 6 Collaborations Project has been on everyone's playlist since it was released on July 12. (C'mon, I know you have at least one song on constant repeat.) Each song on the album is different from the previous, and that's because every song includes a mix of different featured artists. A few of the songs have even dominated the radio this past summer, like "Cross Me" featuring Chance The Rapper and PnB Rock, "I Don't Care" featuring Justin Bieber, and "Beautiful People" featuring Khalid. Now another song off the album is having a moment, because Ed Sheeran's "South of the Border" music video is finally here.

Sheeran's "South of the Border" is a collaboration with Camila Cabello and Cardi B. Fans instantly fell in love with the song when Sheeran dropped his No. 6 Collaborations Project on July 12. The day it was released, Cabello expressed how surreal it was to be working with Ed Sheeran. In an Instagram post, she said, "This guy right here is one of the most meaningful artists in my life."

She continued, "I know we’re friends now so sorry for the not playing cool moment, but genuinely, this is a sick full circle, special moment for me, being on a song with an artist that’s meant so f*cking much to me."

Cabello posted the sweet message with a video of herself and Ed Sheeran working on the lyrics for "South of the Border."

Fans already loved the song so much, and it got even better when Sheeran released a remix of the track by Cheat Codes on Friday, Sept. 27.

You can listen to the "South of the Border" remix below.

After all this hype, fans can celebrate even more, because Ed Sheeran just dropped the "South of the Border" music video, and thankfully, Camila Cabello and Cardi B are super involved — as well as Alexa Ren and Paul Karmiryan. They all came together to film the most epic 5-minute spy, action-adventure movie ever.

I'll be honest: There's a lot going on. I'm not entirely sure what it all means (this is why I don't watch spy movies, y'all), but I'll try to explain.

There's a necklace, and there are a ton of spies after it. Cabello and Sheeran appear to be working together to steal the bling-bling, but another spy (Ren) gets to it first. A fourth spy (Karmiryan) is after the necklace, too, and chases Ren to Mexico to try and steal it from her, where Cabello intercepts both of their efforts. She even knocks Ren and Karmiryan out with a 1-2-punch.

When Karmiryan wakes up, he's being held hostage with Ren and — you guessed it — Cardi B! (At this point, I really have no clue how she's involved, but let's just go with it).

Cardi raps her verse while tied up (I guess Cabello and Sheeran kidnapped her off-screen?) before she wiggles out of her binds and sets Ren free (I guess she's on Ren's team?). Ren gives Karmiryan a goodbye kiss and disappears into the Mexico sunlight, leaving him tied up and at Cardi's mercy (so, they were secretly in love this whole time? TF?).

Ren didn't even snag the necklace before she ran off, so was she working for Cardi the whole time? I'm very lost, so you watch the video below and tell me what's going on. Thanks.