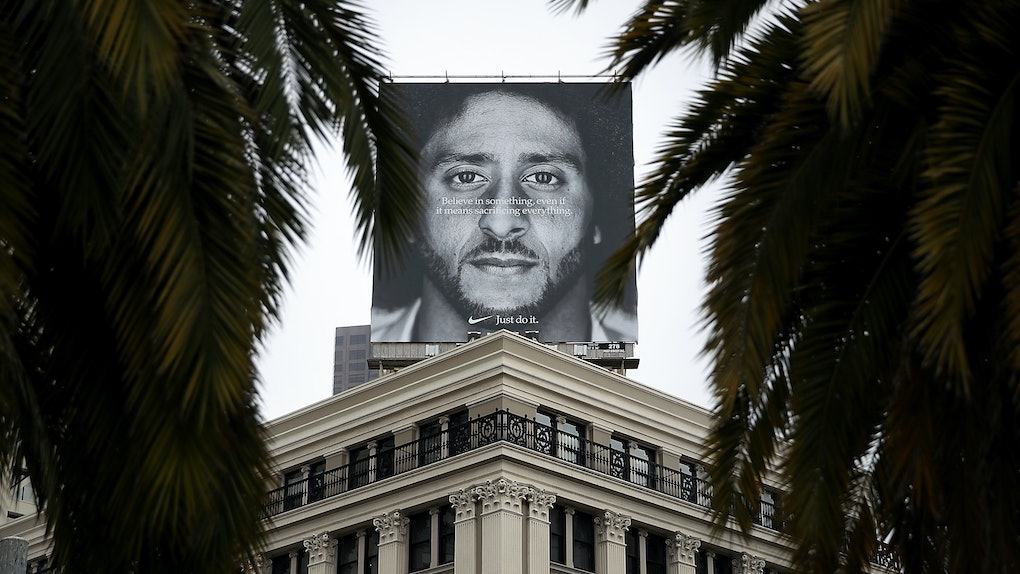 After a controversial new ad campaign, the mayor of Kenner, Louisiana has banned Nike purchases for the city's booster clubs. The literal face of the ad campaign was former San Francisco 49ers quarterback Colin Kaepernick, who in 2016 became the poster child for the NFL protests when he began to kneel during the national anthem to peacefully protest police brutality against black people.

The black-and-white ad sent a powerful message about taking action and standing up for what you believe in: "Believe in something. Even if it means sacrificing everything." But not everyone was on board with that message, apparently.

As of the week of Sept. 5, booster clubs in the city of Kenner now cannot purchase any Nike clothing or equipment to be used at city-owned facilities. News of the ban was reported by The New Orleans Advocate on Sept. 9, citing a memo dated Sept. 5. In the memo, Kenner Mayor E. Ben Zahn III wrote:

Effective immediately all purchases made by any booster club operating at any Kenner Recreation Facility for wearing apparel, shoes, athletic equipment, and/or any athletic product must be approved by the Director of Parks and Recreation, or his designee. Under no circumstances will any Nike product or any product with the Nike logo be purchased for use or delivery at any City of Kenner recreation facility.

In response to the ban, local station WWLTV reported, a group of residents — joined by a couple of players from the New Orleans Saints showed up at a school gymnasium Monday to protest. Many others, including local leaders, expressed their thoughts about the ban on social media.

Apart from protests, residents and onlookers alike weighed in on the Kenner ban on social media, as well. Former New Orleans Mayor Mitch Landrieu chastised the move, too. "Nike ban by Kenner mayor is unpatriotic," Landrieu tweeted Monday. "The ad is about inclusion. Our nation's diversity is our greatest strength."

"It disappoints me that this is happening in my state," tweeted New Orleans rapper Dee-1. "I would like to have a conversation with [Zahn] when i return from this European Tour. Not to fuss, just to build."

Mayor Zahn, responding to the backlash against his ban, released a statement on Monday clarifying and defending his decision. Residents would still be allowed to wear Nike apparel on city grounds, he clarified, and said that he "applaud[s] Nike's message of inclusion," adding,

Private, for-profit companies have every right to advertise how they wish, even if it means using advertising to promote corporate political beliefs. Individuals also have every right to support or oppose any company or brand for any reason. Those freedoms should never be lost.

But he also held firm to his decision. "This government will not let taxpayer dollars be used to promote a company's or individual's political position, platform or principle," Zahn wrote.

Some have responded to the Kaepernick ad by boycotting Nike, destroying their clothes and vowing to shop other brands (Converse, by the way, is owned by Nike).

But despite the boycotts, Nike doesn't seem to be hurting at all. In fact, the company's sales are up 31 percent since the ad's release, NBC reported Monday. Though the campaign was projected to be a risky financial move for Nike, according to MarketWatch, Twitter data about the company and the ad haven't suggested any major market side effects. So ban or not, Nike is probably not feeling the burn from one mayor's decision to disallow city purchases of their apparel.

More like this
These Video Reactions To The Derek Chauvin Verdict Show How Huge The Moment Was
By Lilli Petersen
Why Can't I Change My Instagram App Icon? Try This Before Giving Up
By Cianna Garrison
Taco Bell Is Testing A Plant-Based Meat "Cravetarian" Taco With All Your Fave Toppings
By Cianna Garrison
Stay up to date