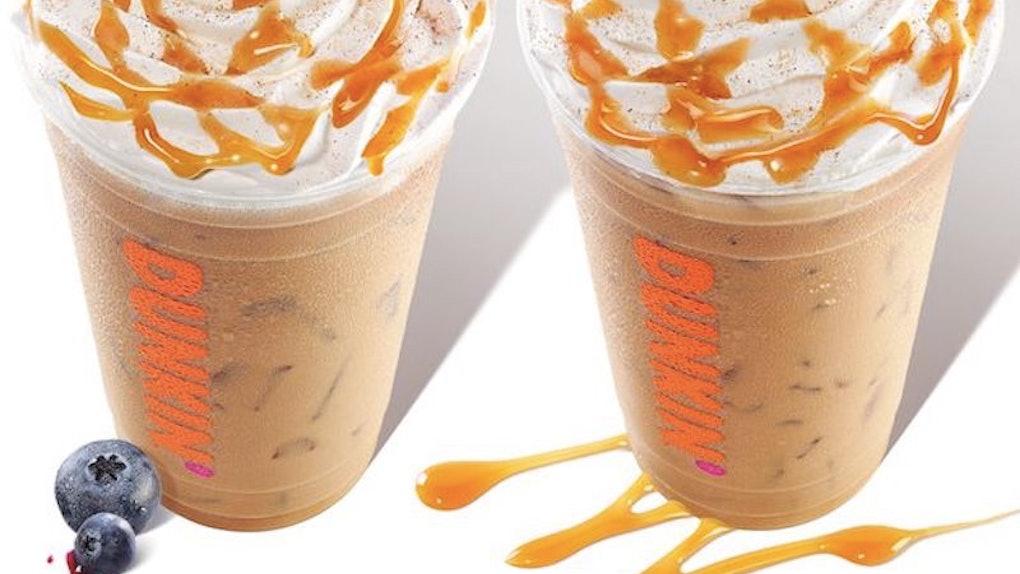 I don't know about you, but I have a go-to Dunkin' order whenever I visit for a morning pick-me-up. However, thanks to Dunkin's new Signature Lattes, it looks like my order is about to get an upgrade. On Tuesday, April 2, the company announced that three new lattes were added to the menu, and each one of them sounds delicious. There's a latte for caramel lovers, a latte for chocolate enthusiasts (like me), and a latte for anyone who craves a sweet slice of blueberry pie on the reg. TBH, I'm going to have a hard time deciding which one of 'em I want to try first.

I'll begin with the new Blueberry Crisp Latte, though. In my opinion, it's reminiscent of blueberry pie and might as well be dessert in a cup. Therefore, I'd love to add it to my morning routine. According to Dunkin', the Blueberry Crisp Latte mixes flavors of blueberry and caramel into the caffeinated sip. Then, it's topped with whipped cream that's covered in caramel-flavored drizzle and cinnamon sugar topping. I haven't tried it yet — but based off of its description, I'm going to assume that anyone who likes the sweet, berry-caramel flavor of blueberry pie will enjoy it.

If you'd rather save the blueberries for the pie, fear not. The other two new Signature Lattes don't feature any fruit, but they still sound sweet. The Caramel Craze Latte is one of them, and it tastes like — you guessed it — caramel. Like the Blueberry Crisp Latte, the Caramel Craze Latte is topped with whipped cream that's covered in caramel-flavored drizzle and cinnamon sugar topping. It sounds perfect for anyone craving a sweet pick-me-up without the berry assets.

The remaining Signature Latte that Dunkin' added to its menu doesn't feature any blueberry flavors or caramel-flavored drizzle. Instead, it boasts a mocha flavor, so chocolate lovers can rejoice. The selection, which is officially called the Cocoa Mocha Latte, is also topped with whipped cream (yay). However, unlike the others, its whipped cream is decorated with hot chocolate powder and mocha drizzle. Therefore, if you want to start your morning with a drink that's reminiscent of hot cocoa, you might want to try this one.

Tony Weisman, Chief Marketing Officer of Dunkin’ U.S., talked about the Signature Latte flavors in a press release emailed to Elite Daily. He said, "With our three new Signature Lattes, guests can now treat themselves to Dunkin’s premium espresso combined with the kinds of fun flavors our fans love from our brand, along with special toppings for a little extra enjoyment."

As you may or may not know, each Signature Latte (and other lattes on Dunkin's menu), starts with a shot of espresso. Then, steamed milk is poured over the espresso, followed by a layer of milk foam. The end result is the Signature Latte that you know and love. Thankfully, Dunkin's Signature Lattes can come hot or iced, and they're available now.

Who knows, maybe these lattes will replace your beloved iced coffee orders. I don't know about you, but I'm excited to give 'em a try.