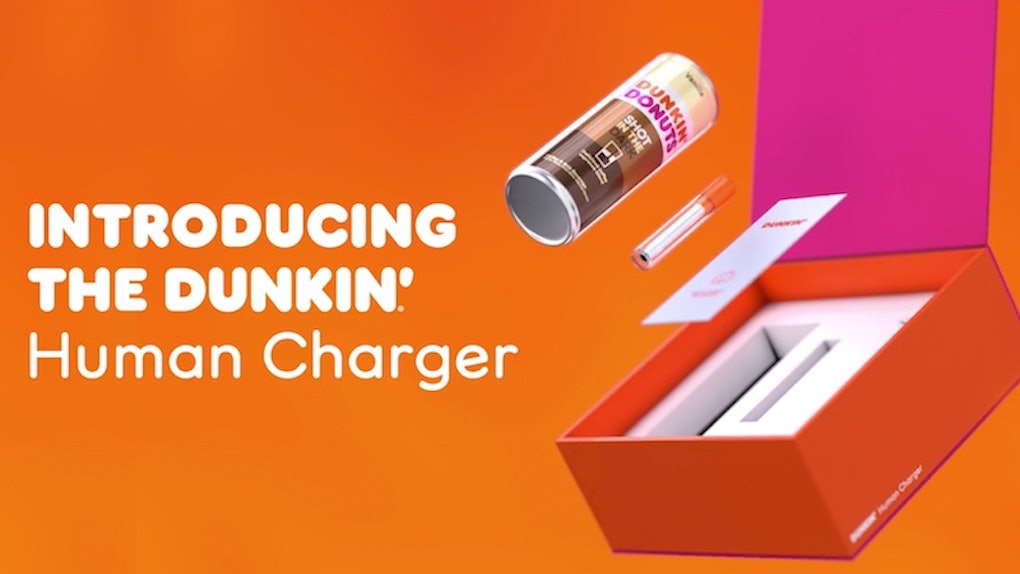 Sometimes, it's hard to stay energized throughout the summer months. Between beach getaways, poolside parties, late-night barbecues, and a full work schedule, staying caffeinated is key. That's why Dunkin's June 21 promo for summer 2019 is essential to the season. The promo itself has two parts — but don't worry, each one features free coffee (hello, caffeine). I'll take it from the top so you know exactly what's happening with Dunkin' on the first day of summer.

On Friday, June 21, Dunkin' will be opening a one-day pop-up in New York City at 213 Bowery Street. There, according to the brand, it'll give away "Human Chargers," which are essentially coffee kits that'll fuel you up when you need 'em. Each Human Charger comes with a Shot in the Dark can, which features a caffeinated combo of coffee and espresso. It also includes a "reusable sipping device" (aka a straw), and a manual for the kit. Think of the entire thing as a packaged phone charger, but for humans instead of phones.

Since the pop-up shop will be giving away Human Chargers, it'll look like a tech store that's decked out in Dunkin' colors, per the company. If you want to check it out and grab a Human Charger for yourself (with a straw and a manual), head to the location 10 a.m. ET on Friday, June 21.

I wouldn't wait too long to get there, because the kits will only be available while supplies last, for one day only. I know that's easier said than done, though, because not everyone lives in The Big Apple (or within walking distance of 213 Bowery Street). If you don't live in New York City but still want a Human Charger, I have good news for you.

According to Dunkin', anyone who owns a Google Assistant or Amazon Alexa can score a free Shot in the Dark can (regardless of where you live). To have one delivered, turn on your device and say, "Ask send me a Sample for Dunkin’ Shot in the Dark" (yes, with the "ask" part included). A few days later, a free Shot in the Dark can will arrive at your doorstep, per the company. However, keep in mind that it'll *only* be the can. In order to score the complete Human Charger, you'll have to visit New York City's pop-up on June 21.

If you try asking your device for a free Shot in the Dark can and it doesn't work, you might have to set up the "Send Me a Sample" technology and enter your address. (Your device should walk you through those steps after you ask for the sample, per Dunkin'.) Apparently, coffee drinkers in the United Kingdom have been using this feature for a while — but this is Dunkin's first time using it in the United States. How exciting!

I know that was a lot of information, so I'll give you a recap. If you live in New York City, stop by Dunkin's pop-up at 213 Bowery Street on Friday, June 21 for a free Human Charger. If you don't live in New York City, ask your Amazon Alexa or Google Home for a free Shot in the Dark can to kick the summer off with. Regardless of which option you choose, you'll be able to score free coffee on Dunkin'.