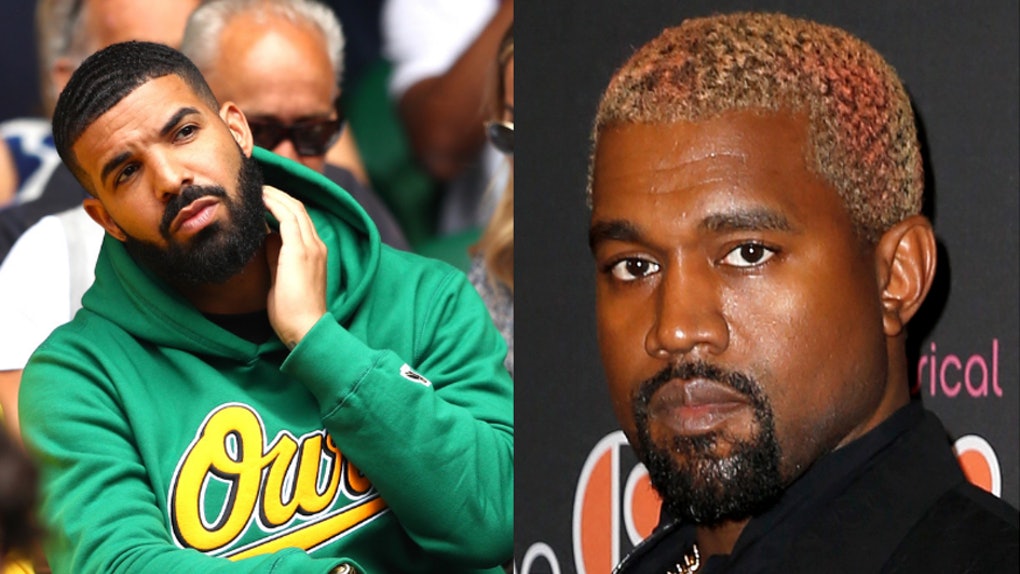 There's been so much drama between Drake and Kanye West over the last few years, that it's hard to even imagine a time when the two rappers didn't have beef. I mean, they've basically been coming for each other for the better part of a decade, over everything from alleged diss tracks to baseless rumors that West's wife, Kim Kardashian, was the "KeKe" in Drake's hit song "In My Feelings" that West felt Drake did not do enough to shut down. And who could forget, back in December 2018, when Yeezy went off on Drizzy on Twitter, insisting in a series of 125 tweets the "God's Plan" singer had threatened his family? It's now less than two months later, but it looks like all may have been forgotten. Or at least temporarily forgotten. I mean, have you seen Drake's Instagram shoutout to Kanye West? He gave the "The Life of Pablo" singer serious props in honor of the 10-year anniversary of his breakthrough mixtape, So Far Gone, and I'm kinda freaking out about it.

OK, so Drake is releasing So Far Gone on streaming services on Valentine's Day. The 18-track mixtape, which dropped in 2009 and received universal praise from critics and fans, is pretty much responsible for catapulting the Grammy winner from a career as a teen actor on Degrassi to one of the biggest recording artists of all time. And so, in a commemorative post on the 'gram, the Canadian rapper got all nostalgic by sharing an updated graphic of the mixtape cover, then thanked everyone who helped him get the iconic record off the ground in his caption by recalling specific memories from a decade ago.

“I will never forget anybody involved in this journey even if you don’t fit in this caption," he wrote.

How dope are all of those "a decade ago" shoutouts? I mean, he thanked OVO's Niko for handing out flyers to promote club nights; Trey Songz for being the first person to recognize his potential; LeBron James for coming to his release party; Jas Prince for introducing him to Lil Wayne; and Lil Wayne for giving him the biggest blessing that anybody had ever given him.

You're catching all the feels now, aren't you? Well, hold up a sec because there was one more hella surprising shoutout buried in the middle of Drake's post, and if you didn't stick around to read the whole thing, you might have missed it.

Are you ready? Here it is:

@kanyewest a decade ago I rapped over your beat cause you just made the best sh*t and even though you stay wildin on twitter these days I will never forget what you contributed to the game and my career.

So are Kanye and Drake cool now? Couldn't tell ya. Like, I seriously have no clue where these two former-friends-turned-rivals actually stand. But I do think it's pretty dope that Drake was able to put personal differences aside and give Kanye credit for helping him, you know?

Will 2019 bring about more wildin' on Twitter? Probably. But until then, Drake thanking Kanye has me feeling a way so I'mma call this whole So Far Gone situation a win.

More like this
These Tweets About BTS' 'Bang Bang Con 2021' Sum Up The Epic Performance
By Cianna Garrison
BTS' 'The Best' Japanese Album: Release Date, Tracklist, Music Videos, & More Details
By Michele Mendez
Are BTS & Coldplay Collaborating On A Song? Here's Why Fans Think It's Happening
By Michele Mendez
Stay up to date