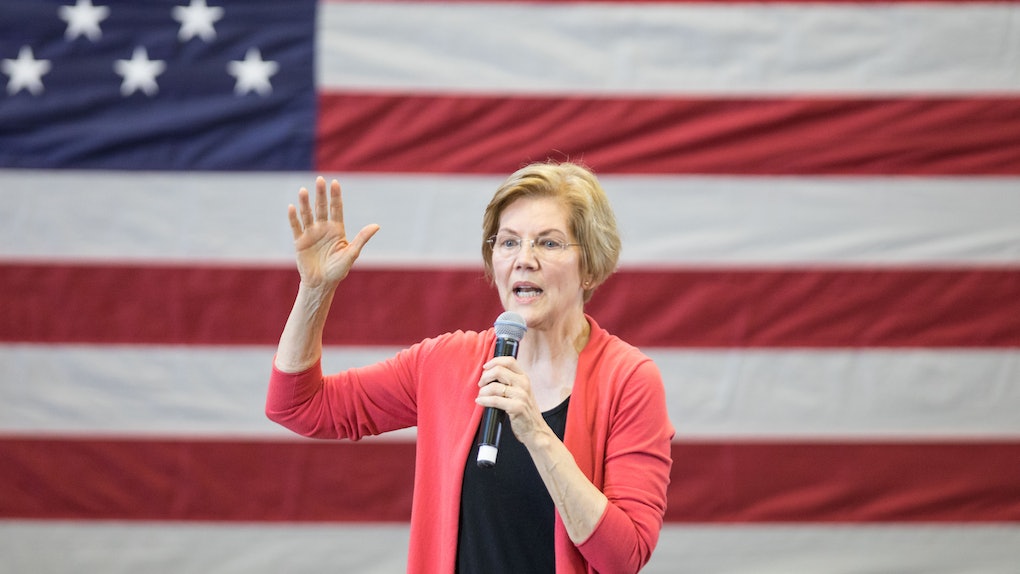 It was technically last year when Massachusetts Senator Elizabeth Warren announced she was running for president. But apparently, the president is just getting around to reacting to the news, a series of tweets on Sunday, Jan. 13 suggest. But if he was attempting to be humorous, Donald Trump's tweet about Wounded Knee and Elizabeth Warren didn't go over well.

In a video shared on Dec. 31, Warren, a Democratic figurehead, announced she would be running for president in 2020 and filmed the announcement over a bottle of beer in her kitchen, with her husband alongside. Trump seemed to have other ideas about where she should've made that announcement, tweeting on Jan. 13:

"If Elizabeth Warren, often referred to by me as Pocahontas, did this commercial from Bighorn or Wounded Knee instead of her kitchen, with her husband dressed in full Indian garb, it would have been a smash!" Needless to say, it was problematic, and not just for his repeat of the troubling "Pocahontas" nickname.

While Trump managed to bungle the reference to Bighorn (the partial name of a battle between Native Americans and U.S. soldiers), even worse was his mention of Wounded Knee, referring to an 1890 massacre, per Encyclopedia Britannica, of some 150-300 Lakota Sioux Native Americans, an estimated 60 of whom were women and children. This past Dec. 29, in fact, marked the 128th anniversary of the tragic affair. Elite Daily reached out to the White House for comment on Trump's tweet but did not hear back at time of publication.

Some in the indigenous community had a particular range of reactions to the news that Trump had invoked the massacre.

"The genocide of Lakota people isn't a joke," tweeted Lakota People's Law Project, a legal advocacy group defending the indigenous group. "Neither is cultural appropriation. The president's racism has consequences for our nation and its peoples, and it's high time he starts being held to account."

"Hard to believe this is what passes for leadership in our country today," added Jesse Phelps, press director of the law project, in an email to Elite Daily.

In a statement shared with Elite Daily, National Congress of American Indians (NCAI) president Jefferson Keel condemned the president's "casual and callous" reference of the massacre. "Hundreds of Lakota, Cheyenne, and Arapaho people lost their lives at the hands of the invading U.S. Army during these events, and their memories should not be desecrated as a rhetorical punch line,” he wrote. “Flippant references to deadly historical conflicts and name-calling that mocks Native identity have no place in our political discourse."

Rodney Bordeaux, chairman of the Rosebud Sioux Tribe, added in the statement, "On behalf of the Rosebud Sioux Tribe, I condemn President Trump’s racist and disrespectful tweet about this brutal incident, in which an estimated 300 unarmed men, women, and children were rounded up and slaughtered.” The statement also encouraged the administration to educate themselves about contemporary Native Americans and the issues that are relevant to them.

Some merely expressed frustration that Warren and Wounded Knee were back in the press and that they'd be fielding so much fanfare about it.

Outside of the indigenous community, Twitter more broadly was unsurprisingly reacting to Trump's tweet about the event marking the mass slaughter of indigenous people. A warning: some of these tweets may be upsetting.

Sunday was certainly not the first time Trump has called Warren "Pocahontas," and in fact was the latest in an ongoing tirade by the president and members of the GOP more broadly to discredit Warren over her ethnicity, which has been a point of contention since Warren released the results of a DNA test to address criticisms about her claims to Native Amerian heritage. The issue has become so hot-button in the media, in fact, that some University of Minnesota scholars have compiled a syllabus addressing common questions about DNA testing and ethnicity verification.

Adding insult to injury, Trump's administration has also made policy moves harmful to Native Americans. For example, as Politico's Dan Diamond points out, the administration moved to put restrictions on indigenous people's access to health care coverage, and moved to strip away native land, in what former Standing Rock Sioux chairman David Archambault II told Al Jazeera was an effort to "infringe upon the rights of Native American people." Elite Daily reached out to the White House for comment, but did not immediately hear back.

Setting aside that he invoked a massacre to, as it appears, make fun of Warren, the suggestion of locations on its face makes little sense. For one thing, Bighorn isn't a place. In fact, per The History Channel, it's part of the name of a battle that was fought near the Little Bighorn River in Montana, where a group of Lakota Sioux and Cheyenne natives had a standoff with U.S. soldiers after they'd refused to move to a reservation. And apparently, one tweet mocking the senator wasn't enough.

Trump, in a second tweet on Sunday, was back at it again on the same video, making a dig at Warren and her husband: "Best line in the Elizabeth Warren beer catastrophe is, to her husband, 'Thank you for being here. I'm glad you're here' It's their house, he's supposed to be there!"

Whether or not her husband was supposed to be in the house or not, it's fair to say Trump's reference of the historic massacre on indigenous people was, to put it lightly, ill-advised.