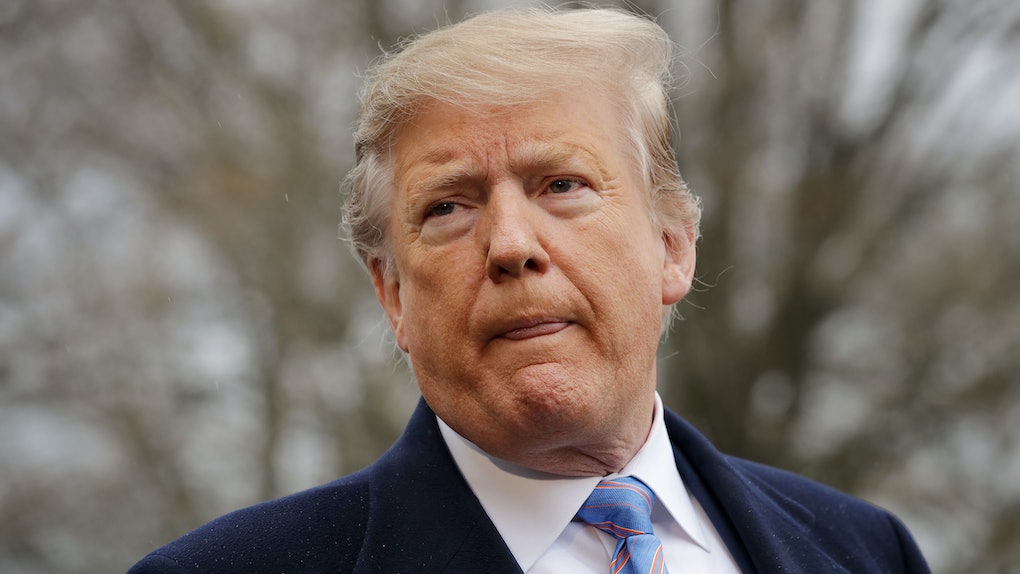 There's one thing about President Donald Trump that has always been crystal clear — even before he stepped into the Oval Office: he likes to put his name on stuff. Anyone who's taken a stroll through Manhattan streets and seen the Trump name looming in big gold letters atop buildings knows this fact to be true. But if you need some more proof, look no further than Donald Trump's reported comments about George Washington and real estate — there's quite a bit to unpack there.

During a guided tour of Mount Vernon in April 2018 Trump reportedly had some criticism for President George Washington — you know, from one commander in chief to another. According to Politico, while touring the grounds of the first president's estate with France's president Emmanuel Macron, Trump got a bit of a history lesson when he was clued into Washington's penchant for real estate. But, he reportedly couldn't wrap his head around why the country's first leader didn't name Mount Vernon or any of his other properties after himself. "If he was smart, he would’ve put his name on it," Trump reportedly said of Washington. "You’ve got to put your name on stuff or no one remembers you.” Elite Daily reached out to the White House for confirmation or comment on Trump's remarks, but did not immediately hear back.

According to The Hill, the tour guide for the day, Mount Vernon president and CEO Doug Bradburn, reportedly pointed out that the first president managed to name the nation's capital after himself, aka Washington, D.C., prompting Trump to reportedly laugh and acknowledge the point. A representative of Mount Vernon declined to comment to Elite Daily about the visit beyond a public statement made at the time. “We are always happy to extend the famous Washington hospitality to the President of the United States and visiting dignitaries from around the world," Mount Vernon Regent Sarah Miller Coulson said in the statement.

The real estate part reportedly came up in the tour because Bradburn was apparently trying to keep Trump interested during the 45-minute tour of the compound, a source close to the tour reportedly told Politico. The White House did not immediately respond to Elite Daily's request for comment on the president's level of interest during the tour. Bradburn reportedly told Trump all about Washington's properties through Virginia and Washington, D.C. “That is what Trump was really the most excited about,” a second source told the publication.

Trump has his name on properties in 19 countries and, according to Curbed, on 13 buildings just in Manhattan — including Trump International Hotel and Tower near Central Park, and Trump Plaza on Manhattan's East side.

But it's not just about his name on buildings all over town. On Wednesday, July 22, the Federal Elections Committee (FEC) released Trump's financial disclosure forms, as are required by every federal candidate, according to Quartz. The forms showed that out of the 515 entities Trump listed, 268 of them had his last name on them. Quartz noted that more had some variation of his name or initials, but they didn't include those in their report. That's a lot of holdings to go through.

The moral of the story here, according to Trump, is obviously if you liked it then you should've put your name on it. When it comes to buildings, at least.