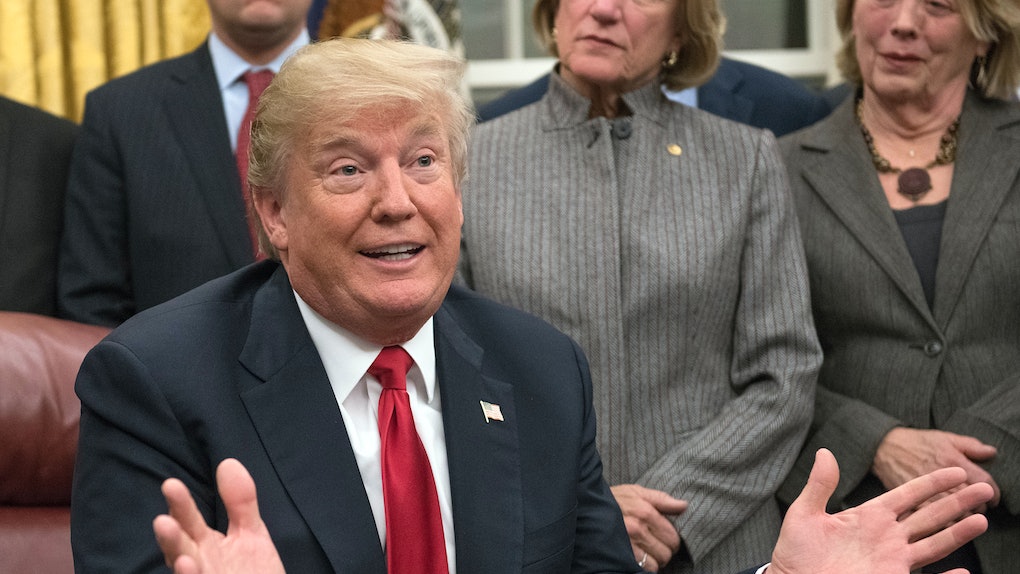 Donald Trump's New Tweet About The Wall Says Some Of It Will Be See-Through, & Huh?

On Wednesday afternoon, Jan. 17, The Washington Post reported that President Donald Trump's chief of staff, John Kelly, told a group of Democratic lawmakers that Mexico would not be paying for a new border wall. On Wednesday night, Kelly did not deny the report and told Fox News' Bret Baier the president has "adjusted" some of his views on a proposed border wall. The next morning, however, Donald Trump's new tweets about the wall insisted that Mexico would indeed pay for the wall, but that some of the wall would include see-through barriers.

In a pair of tweets, the president wrote,

The Wall is the Wall, it has never changed or evolved from the first day I conceived of it. Parts will be, of necessity, see through and it was never intended to be built in areas where there is natural protection such as mountains, wastelands or tough rivers or water ... The Wall will be paid for, directly or indirectly, or through longer term reimbursement, by Mexico, which has a ridiculous $71 billion dollar trade surplus with the U.S. The $20 billion dollar Wall is “peanuts” compared to what Mexico makes from the U.S. NAFTA is a bad joke!

The two tweets from President Trump directly contradicted his chief of staff in some areas, but seemingly confirmed Kelly's points of view in other areas.

By saying the wall will be paid for by Mexico — if even indirectly — Trump refuted what Kelly reportedly told Democrats on Wednesday (which was that Mexico would not be paying for the wall). On the other hand, Trump said that parts of the wall will be see-through, and that it won't be built in areas where topography — rivers, mountains and the like — intervene along the border. That type of dynamic border security system is indeed an evolved and more complex description of the "great, great wall" along the U.S.-Mexico border that Trump used to promise while on the campaign trail.

Why Did Trump Contradict His Chief of Staff?

Those comments included Kelly giving details to Baier about what he said on Wednesday when he spoke to a group of Democrats, the Congressional Hispanic Caucus.

"There's been an evolutionary process that this president has gone through ... and I pointed out to all the members that were in the room that they all say things during the course of campaigns that may or may not be fully informed," Kelly told Baier.

Kelly also told Baier that the president has evolved in how he looks at many policies, while stressing that other politicians do the same after transitioning from the campaign trail to serving in office.

"So he has evolved in the way he’s looked at things," Kelly told Baier. "Campaign to governing are two different things and this president has been very, very flexible in terms of what is within the realms of the possible."

Just a week before Kelly's interview on Fox News, Trump adviser Kellyanne Conway gave a similar interview to CNN, telling host Chris Cuomo that Trump's ideas had been adjusted by discussions with experts.

"What's true is that after conferring with the experts who are involved in this process, Christopher, the president has discovered that part of it, he knows, will be the physical wall, part of it is better technology, part of it is also fencing," Conway said. "There are rivers involved, I'm told, there are mountains involved, there's terrain that isn't conducive to building an actual physical structure in some places."

Still, it is only Kelly's comments that prompted a strong reaction from the president.

More like this
Ivanka Trump's Women's Initiative Failed Inspection, & It's A Mess
By Rhyma Castillo
Joe Biden's Quotes About Kamala Harris Are Full Of Respect
By Rhyma Castillo
These Tweets & Memes About Matt Gaetz's Venmo All Make The Same Joke
By Cianna Garrison
Stay up to date