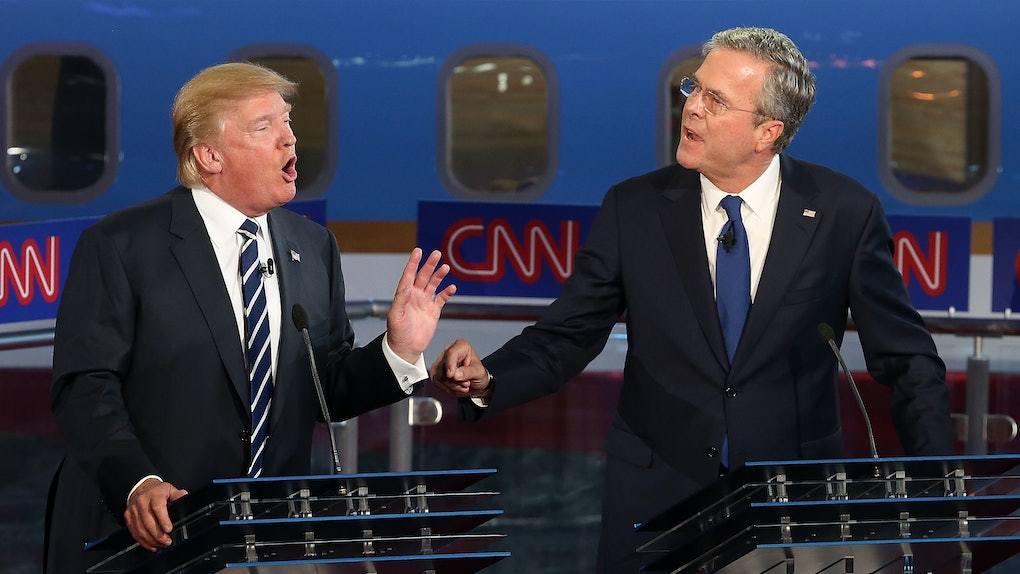 The president of the United States won't be attending the funeral of a former first lady. That was much was made clear by the White House on Friday, April 20. The reason President Donald Trump won't attend Barbara Bush's funeral is because of a decision made "out of respect."

Melania Trump, however, is set to be in attendance at the ceremony, which will be held on Saturday, April 21.

"First Lady Melania Trump will attend the memorial service for Barbara Bush this Saturday on behalf of the First Family," a White House spokesperson confirmed on Friday, according to Politico. "To avoid disruptions due to added security, and out of respect for the Bush Family and friends attending the service, President Trump will not attend."

The statement appears to be an acknowledgment of the acrimonious relationship between President Trump and the Bush family. The nature of that relationship is highlighted by the many battles Trump and former Florida governor Jeb Bush had during the campaign for the 2016 Republican presidential nomination.

Often, those battles got personal, and one tumultuous day during the Republican primaries underlines that the most.

The day was Feb. 8, 2016. The New Hampshire primary was the next day and Barbara Bush had been campaigning with her son Jeb at the time. It began with Jeb Bush playing a word association game on MSNBC's Morning Joe. When Trump's name came up, Jeb responded with "loser."

“The guy’s just a real-estate guy,” Jeb would go on to say, while talking about why other Republicans shouldn't be scared of Trump. “He’s gone bankrupt four times. He’s a successful man, but he’s not perfect by any stretch of the imagination. So why not confront him and challenge him?”

Trump would later call into the show, playing the same game, and calling Jeb a "stiff."

“Jeb is an interesting duck,” Trump would go on to say. “Here’s the story on Jeb: He’s a stiff who you wouldn’t hire in private enterprise, ok? This is a stiff. This is a guy that if he came looking for a job, you’d say, ‘no thank you,’ and that’s the way it is.”

Later in the morning, Jeb would respond to Trump on Twitter: "You aren't just a loser, you are a liar and a whiner."

Fast forward to the afternoon. Jeb Bush is talking to CNN's Dana Bash and again asserting that he's a "warrior" taking on Trump, unlike other Republicans. "There is a difference between just sitting back and watching someone try to hijack a party that I believe will allow people to rise up again," he told Bash.

Trump, not one to miss someone speaking critically of him on TV, would later call into CNN while Wold Blitzer was anchoring.

"Jeb is having some kind of a breakdown," Trump told Blitzer. ​"He's an embarrassment to his family. He has to bring his mother out and walk his mother around at 90 years old. I think it's a very sad situation that's taking place."

Trump would go on to win the New Hampshire primary. Both George W. Bush and George H.W. Bush avoided voting for Trump during the general election.

Just watched Jeb's ad where he desperately needed mommy to help him," Trump tweeted on Jan. 22, 2016. "Jeb — mom can't help you with ISIS, the Chinese or with Putin."

Weeks later, Trump tweeted, "Wow, Jeb Bush, whose campaign is a total disaster, had to bring in mommy to take a slap at me. Not nice!"

Now that Barbara Bush has passed away, and is set to be remembered at her funeral on Saturday, Donald Trump won't be there, "out of respect" for a family he's locked horns with on so many occasions.