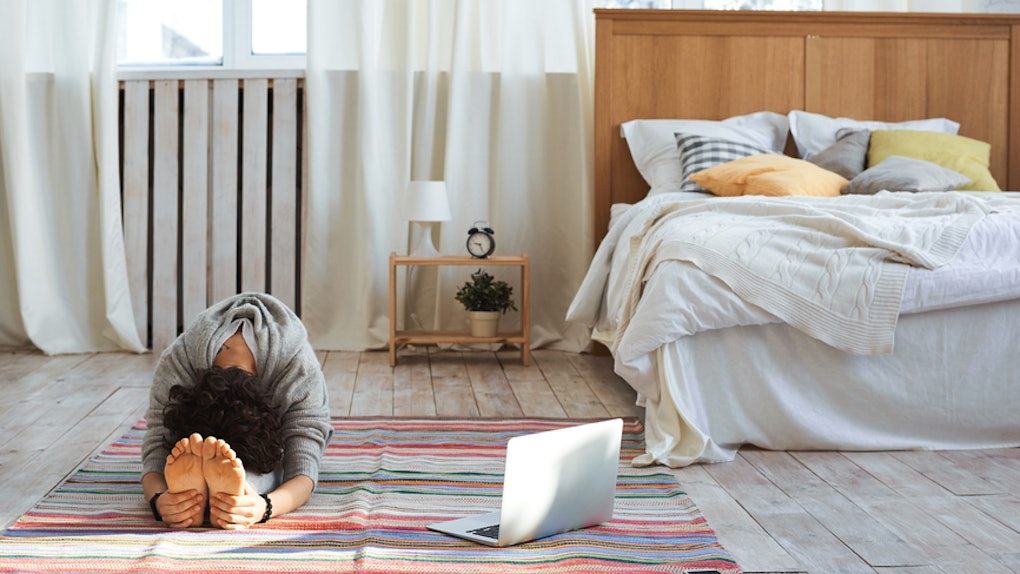 Doing Yoga On Your Period Is Great For PMS, But Here Are 7 Poses To Avoid

The idea of hitting up a yoga class during that time of the month is controversial AF. Some people say to skip the flow during your literal flow, while others say the movement and breathing will feel great for your bloated body. Whichever side you're on, doing yoga on your period has actually been shown to be great for PMS, so depending on how your body feels, a nice vinyasa class could be just the remedy you're looking for to ease your symptoms.

There are plenty of yoga poses you can do when you're on your period that improve circulation throughout your body, and therefore decrease bloating. Plus, the entire meditative, mind-body experience of yoga is incredibly soothing for cramps, hormone-induced moodiness, and all of those intense cravings for anything and everything containing sugar.

As amazing as yoga can be for your period symptoms, though, there are a few asanas to take caution around when Aunt Flo comes to visit. Extreme postures like backbends, intense twists, and inversions are all poses that are best saved for another time when you're menstruating.

As a yoga teacher, I always make sure to mention these precautionary measures to my students in our classes. Ultimately, it's entirely up to the yogi herself as to whether or not she wants to opt out of certain movements. But if you're curious about which poses may not be best to do during your period, here's a breakdown of the ones you should either modify, or consider avoiding entirely during that time of the month.

Revolved side angle pose is a pretty deep and extreme twist that requires a lot of strength and energy — aka things you might not want to be depleting too much if you're already feeling lethargic AF on your period.

Intense twists are usually a no-go during your time of the month, because they put a lot of pressure on your abdominal area, which is probably already hurting a bit thanks to PMS symptoms.

If this pose is instructed during your flow and your body is telling you to skip it, try busting out a warrior II instead, which calls for a bit less strength and opens up your hips for a nice, soothing stretch.

Inversions are probably the most highly debated poses when it comes to doing them during menstruation (don't even get me started on inverting during pregnancy; the yoga community goes f*cking wild there, but I digress).

Getting upside down during your time of the month is said to shift your "apana energy" (the energy that flows from your naval to your cervix). This isn't advised during your period because it's basically working against the natural flow within your body, and might cause a disruption of the delicate, hormonal processes that happen during your period.

TBH, being a woman is exhausting sometimes. But you don't have to sit around while everyone else inverts. Try fish pose instead for a luxurious shoulder-, upper back-, and chest-opener.

Boat pose is an intense core-sculptor, which you might want to skip out on when PMS symptoms are wreaking havoc on your body.

The strength required in this asana can increase the heat in your body and may cause even more bleeding as a result — hard pass, right?

Instead of navasana, try a head-to-knee forward bend for a relieving and grounding hamstring stretch.

Another reason you're told to avoid inversions during your period is because they literally cause your uterus to shift in the direction of your head.

This increases the flow of blood within your body, which, again, could possibly create a heavier flow. Nobody has time for that nonsense, amirite?

Save your handstands for post-period, and strike a half moon pose instead.

Shoulder-stand requires you to lift both your pelvis and pelvic floor, and TBH, your uterus will not be happy about that.

Plus, this asana is technically considered an inversion, and now you're fully aware all of the sh*t that goes down with those bad boys when you try to do them on your period.

An incredible replacement for this asana is legs-up-the-wall pose, which will give you many of the same benefits, without all the pressure on your lady parts.

Plow pose usually comes directly after shoulder-stand in a yoga flow, so it's pretty self-explanatory why you should be sitting this one out when you're on your period.

If you have bad cramps, the added pressure to your abdominal region will probably make them worse, and may even induce more swelling and bloating than you're already dealing with.

A gentle bound angle pose will combat PMS symptoms, so incorporate this posture instead until your period is over.

Wheel pose is another asana that you might not think is an inversion, but, since your head is below your heart, it totally is.

Plus, intense backbends in general are a no-no when Aunt Flo comes to visit. These poses will likely place stress on the pelvic region, adding unnecessary pressure to your cramps.

Instead of bending into urdhva dhanurasana, replace it with a gentle camel pose. Pro tip: If you do decide to flow into camel pose, make sure you keep your toes tucked so that your lower back will get some relief and hopefully feel cramp-free.