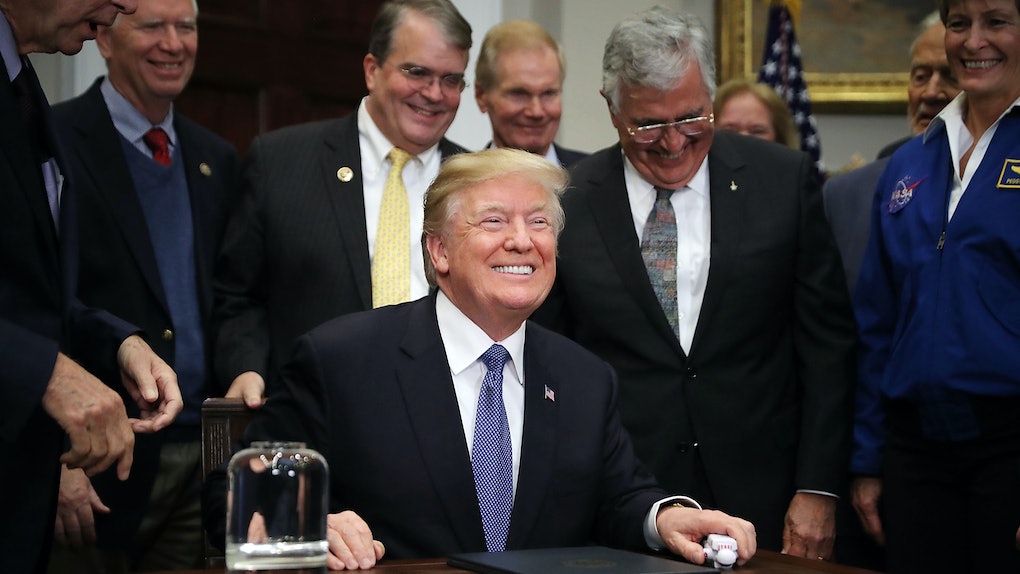 Does The Tax Bill Help Trump? GOP Reform Could Benefit His Companies

With a new tax law crafted by Republicans and President Donald Trump set to change the future for how Americans will fill out their taxes, an obvious question goes begging: who will the law benefit? For those skeptical about the process that was used to shape the tax reform — which saw the GOP secure votes only within its party, which sought to achieve reform in a relatively rushed fashion — the question might be a bit more cynical: Does the tax bill help Trump? And how about other Republicans?

For the president, especially, all signs points to an absolute yes, specifically because of a few key provision in the GOP's tax bill.

First there's the obvious. The Republican tax plan cuts the corporate tax rate by about a third, from 35 percent down to 21 percent. While the tax cuts that will be experienced by individuals and families across different tax brackets will be temporary (they expire in 2027), the tax cuts for corporations will remain permanent. President Trump is a business owner, of course, so that permanent corporate cut is a plus for him and the Trump Organization.

Then there are not-so-obvious factors, which require a little bit more explanation. On Tuesday, Dec. 12, CNN Chief Business Correspondent Christine Romans did some of that explaining, laying out how those factors could benefit Trump:

A key point here is that Romans' analysis came at a time when Republicans were still conferencing together in order to iron out the differences between the tax bill crafted by House Republicans and the one created by Senate Republicans. While both bills had similarities, there are significant areas in which they differed, areas that could help Trump personally.

Now that a final bill has been agreed upon, there's more clarity on how exactly the president could benefit.

The final GOP tax bill includes a tax break for pass-through business. Those are business that pass on profits to the owner, who then reports those profits as part of his or her income to be tax at the individual rate. For the top earners in the country, the individual rate is in the high 30s. So the pass-through income is taxed highly.

Under the GOP's new plan however, pass-through business owners, like real-estate entrepreneurs (one obvious example being Donald Trump) will be able to deduct 20 percent of their pass-through income. An estimate from Forbes figures that such a deduction could save the president $11 million per year. The deduction will also help other notable names in Washington D.C. like Jared Kushner, who earns money from real estate.

Senator Bob Corker (R-TN), who also earns money from real estate, could also benefit. The fact that the senator had been the lone Republican against the tax plan before the the deduction on pass-through income was finalized drew scrutiny over the pass weekend.

Under the latest Republican tax plan the rate for that tax bracket drops to about 37 percent. Meanwhile, the plan also cuts individual rates across other tax brackets as well.

It's important to remember in all this that cutting taxes is part of the Republican party's DNA. House Speaker Paul Ryan has been craving to change the tax code long before Donald Trump came along. A tax plan created solely by a Republican Congress and president would always be likely to benefit Trump.

Still it's fair to consider how the figures instrumental in crafting laws benefit from those laws, if for nothing else then for the sake of healthy skepticism.