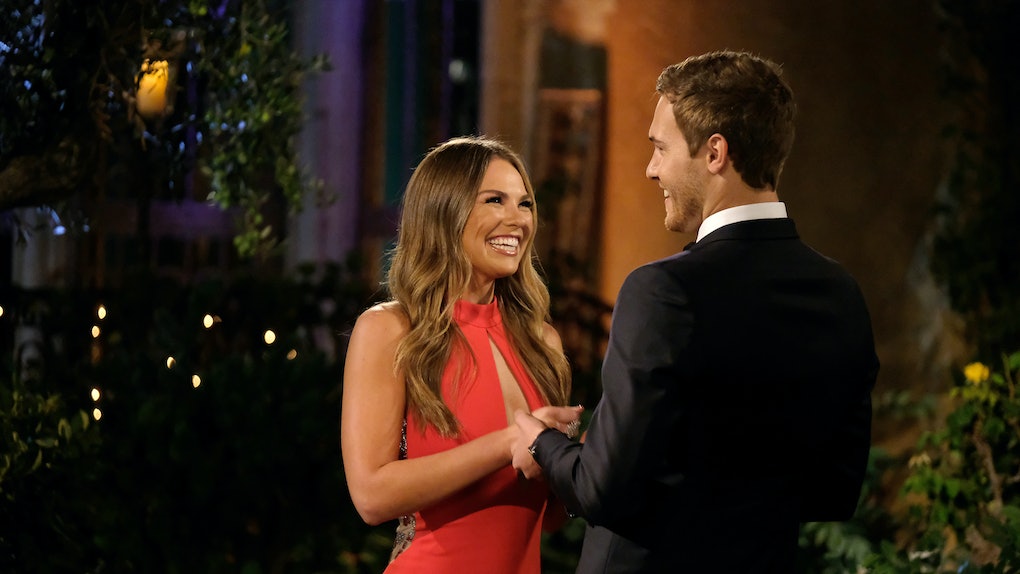 Does Peter Weber Still Have Feelings For Hannah Brown? This Quote Is Very Telling

Months have gone by since he left her season of The Bachelorette without a fiancée, but does Peter Weber still have feelings for Hannah Brown? Well, in a Jan. 2 interview with Access Hollywood, Weber opened up about the flood of emotions that overcame him when Brown shocked the world by show up on his season of The Bachelor out of the blue. If you haven't been keeping up with promos for Weber's season of The Bachelor, which airs Jan. 6, a trailer released on Nov. 25 revealed that Brown is going to shock Weber and all of the ladies in his house by making a surprise appearance on his show in an attempt to win her ex back.

During his interview with Access Hollywood, Weber made it absolutely crystal clear that he had no idea Brown would be making an appearance on his show. In fact, he barely recognized her when she first walked out the limo. "That first night I see that door open up and I thought it was a really beautiful girl," he recalled. "At first I didn’t actually know it was her."

When he did start putting two and two together, his feelings started to intensify. “She starts coming out of the limo, I realize who it is [and] jaw-drop, wasn't expecting it at all,” he told Access Hollywood. “I think the most important thing for everyone to kind of realize watching this is everyone saw our relationship on The Bachelorette. That was a really real relationship for the both of us [with] true feelings. We both really really care from each other from that relationship. Everything you’re gonna see is true and it’s raw and it’s from the heart.”

During the trailer teasing Brown's surprise appearance, she says she made the decision to come see her ex because she "knows there's still something there" between them. But does Weber feel the same way? Well, in the trailer he does ask her to join the rest of the ladies in the house, so it definitely seems like he might agree. But, in the interview with Access Hollywood, he got real about his complicated feelings for his ex.

“Before she came, before that first night, in my mind, I was over Hannah. I wouldn’t have taken this opportunity to be the Bachelor if I wasn’t because that was going to do a disservice to me and all the women," he shared. "After I saw her that first night, I may have questioned if I was completely over her.”

While we don't have answers now with regards to how Weber's season of The Bachelor is going to pan out, I think we can all agree it's shaping up to be an absolute must-watch. Tune in on Jan. 6 to watch the first episode!