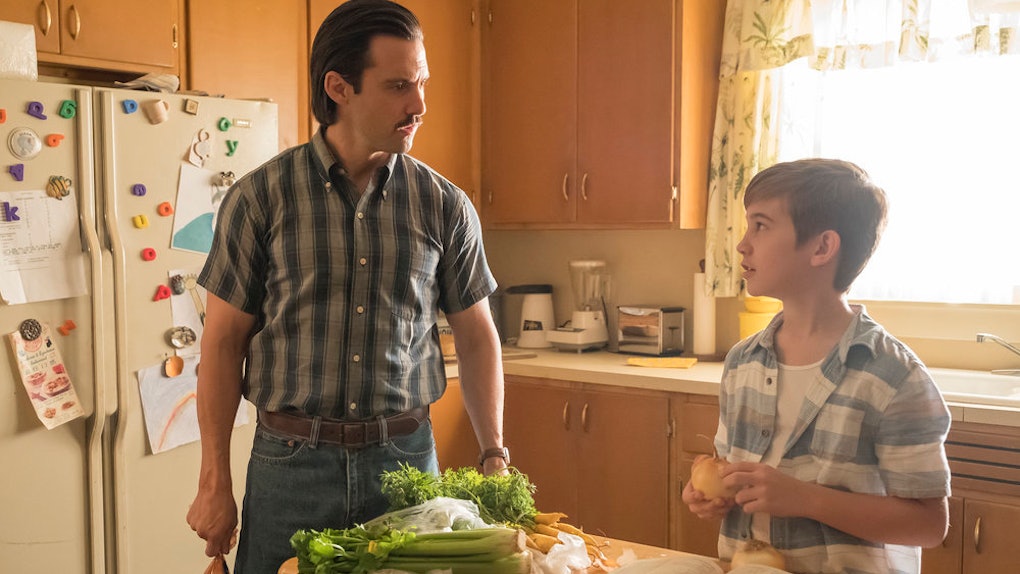 Does Jack Have Other Kids On 'This Is Us'? This Season 3 Theory Is Something New

This Is Us is no stranger to offering up plot twists and turns, so, naturally, theories about what's to come and what might have been pop up every time we get a kernel of new info. But the Season 2 finale didn't just give us a kernel — we got an entire jumbo popcorn bag to work with. From Deja's behavior to Randall's family's uncertain future (Who was he talking about?!), and a flight to Vietnam for Kevin, a handful of narrative doors were flung wide open. Speaking of Kev's trip... Does Jack have other kids on This Is Us? The crazy concept is now floating around.

According to Deadline, at a Q&A about the finale at SXSW, the moderator posed a theory regarding the possibility that Jack fathered another child at some point and Kevin was going to see said half-sibling. Say what?! “Hold on! Jack loves Rebecca! Jack loved Rebecca before he even knew Rebecca!"" Milo Ventimiglia reportedly responded, says Glamour. Yes. We know this. But just because he loves his wife doesn't mean he has no past. Apparently creator Dan Fogelman added, "Anything is possible. The fact that you all talk about the show like it's Lost is kind of crazy to us, but we love it and it's exciting."

If there's any truth to this somewhat outlandish conjecture, another Pearson child would seriously add another layer to Jack's complex history. We put Jack on a pedestal, we see him purely in relation to Rebecca and his Big Three, and it's difficult to imagine he exists outside of his family — even though he had a life before them. It's nearly blasphemous to loyal fans of TV's Greatest Dad to consider he could potentially be a dad to someone else. But it wouldn't change the man he is, it would change our perception of his past. Plus, it could add unique character depth and shake up the dynamic the close-knit Pearsons already share. We have no idea if it's something the writers want to even touch, but we do know they're definitely delving into Jack's experience in Vietnam next season. So, who knows?

This season, audiences found out that Jack lost his younger brother, Nicky, in Vietnam. And we've probably just scratched the emotional surface when it comes to this profound discovery. Following this revelation in October, executive producer John Requa spoke to EW about how it's affected Jack:

We can’t get into the details, but clearly this looms large in the person that he is. The big thing is that he keeps secrets, that he has compartmentalized and hidden away this part of his life, which obviously was his brother, and it was a big part. Obviously a major thing happened, some trauma of some sort.

From the looks of it, Kevin wants to explore Jack's wartime background through a journey to where it took place. Season 3 promises to take us further into Jack's time in Vietnam and beyond.

"I think Season 2 was so much about Jack's death obviously, and I think Season 3, in a really cool way, is going to be more about his life and sort of focusing on these chapters that we haven't yet seen," executive producer Elizabeth Berger revealed in the Season 2 finale after show. "I think Jack has alluded to Rebecca that he has a lot of secrets and there are parts of his life that even she hasn't been privy to, and we're going go get to really explore those parts in a really exciting way."

This Is Us viewers might still be mourning Jack, and even though he's technically gone in the present, it's obvious we're just starting to get to know him.