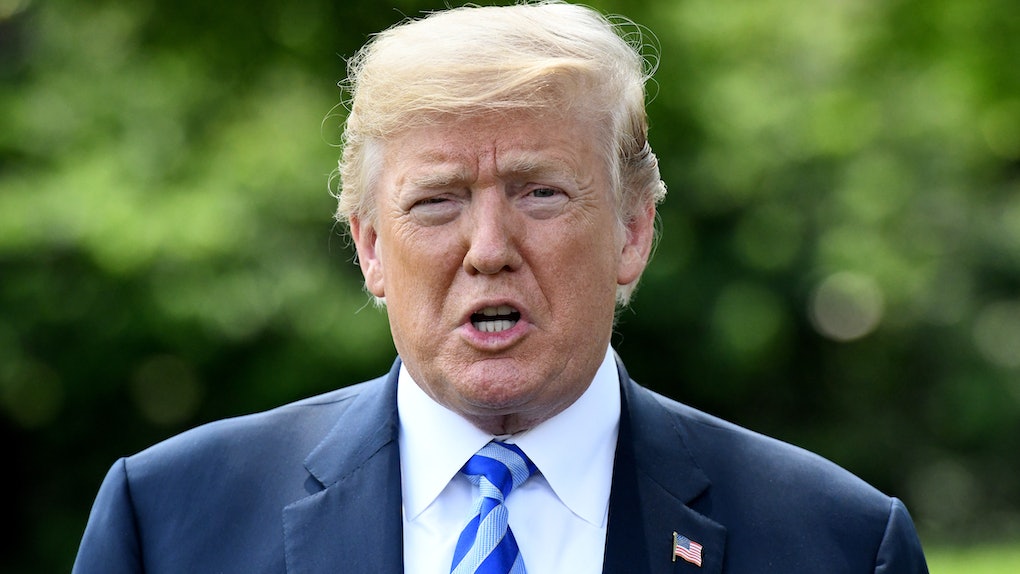 Does Donald Trump Have The Power To Pardon Himself? "Probably," According To His Lawyer

President Donald Trump's residency in the Oval Office has been accompanied by a deep-dive probe into possible Russian involvement in the 2016 election. While the question of whether or not Trump himself was involved in any Russian meddling has yet to be answered, it doesn't stop the speculation about how the president's legal team might try to save their client if he gets in trouble. Which begs the question: does Donald Trump have the power to pardon himself? According to his lawyer, the answer is "probably."

Rudy Giuliani, Trump's newly appointed lead attorney for his personal legal team and former mayor of New York City, appeared on ABC's This Week on Sunday, June 3, and said that Trump "probably" has the power to pardon himself.

"He's not, but he probably does," Giuliani told host George Stephanopoulos when asked about if Trump's lawyers believe the president has the power to pardon himself.

But Giuliani assured viewers that although Trump might have the power, "He has no intention of pardoning himself, but that doesn't say he can't." Giuliani apparently thinks it will come down to a clear interpretation of the Constitution. He said,

It would be an open question. I think it would probably get answered by, 'gosh that’s what the Constitution says.’ And if you want to change it, change it. But, yeah.

Head of the table as leader of the free world is a pretty powerful position to be in, but having the ability to pardon oneself is on a whole different level. Let me also just say considering the possibility at all just seems a little sketchy.

It remains our position that the President’s actions here, by virtue of his position as the chief law enforcement officer, could neither constitutionally nor legally constitute obstruction because that would amount to him obstructing himself, and that he could, if he wished, terminate the inquiry, or even exercise his power to pardon if he so desired.

Elite Daily reached out to the White House and President Trump's legal team for comment on the letter, but did not immediately hear back.

So, technically, the letter was not meant to insinuate that Trump would in fact pardon himself should the need arise — only that he could, and not even necessarily for a self-pardon. But, Trump's legal team even bringing up the "power to pardon" seems a little sketchy to me. Like he's gonna not use it? Come on.

Even Giuliani recognizes that it was a bad look. On NBC's Meet the Press, on Sunday, June 3, Giuliani said that he probably wouldn't have sent the letter — which was reportedly sent in January 2018, prior to Giuliani signing on as lead attorney — if he was on staff at the time. "I'm not sure I would have written that," he said. He told ABC that Mueller's team had not responded to the letter.

The former mayor also made it very clear that he thinks it would be a terrible idea for Trump to pardon himself, and that it would lead to some serious ramifications, including even impeachment. Giuliani said,

The president of the United States pardoning himself would just be unthinkable, and it would lead to probably an immediate impeachment.

But this letter from Trump's lawyers is not the first time that the topic of pardoning has come up. According to a June 20, 2017 report by The Washington Post, Trump looked into whether he can pardon family members, associates, and even himself. On July 22, the president even tweeted about having the power to pardon.

So Trump definitely knows that the power exists, in some form, and has obviously looked into it and toyed with the idea. He hasn't said that he'll actually do it, if necessary, but then why did he even look into it?

For what it's worth, many legal scholars say that no, the president cannot pardon himself, according to NPR. On the other hand, some say that yes, he does have the right. Ultimately it's hard to say definitively — no president has ever tried to issue a self-pardon.

If the track record of Trump being held accountable for his actions is any indication of what the future holds, I always assumed he'd come out the other end of this investigation without a scratch. But I never thought it'd be because he can just say, "nah" to the whole thing altogether. I'm not worried, you're worried (let's just all worry to be safe, though).

More like this
These Tweets About The Bidens' Photo With The Carters Ask A LOT Of Questions
By Rhyma Castillo
The Woman Behind @NorisBlackBook Is Serving Hilarious Kardashian Commentary On IG
By Lara Walsh
Daily's Poptails Frozen Alcoholic Pops Are Wine-Based, Fruity Treats
By Cianna Garrison
Stay up to date