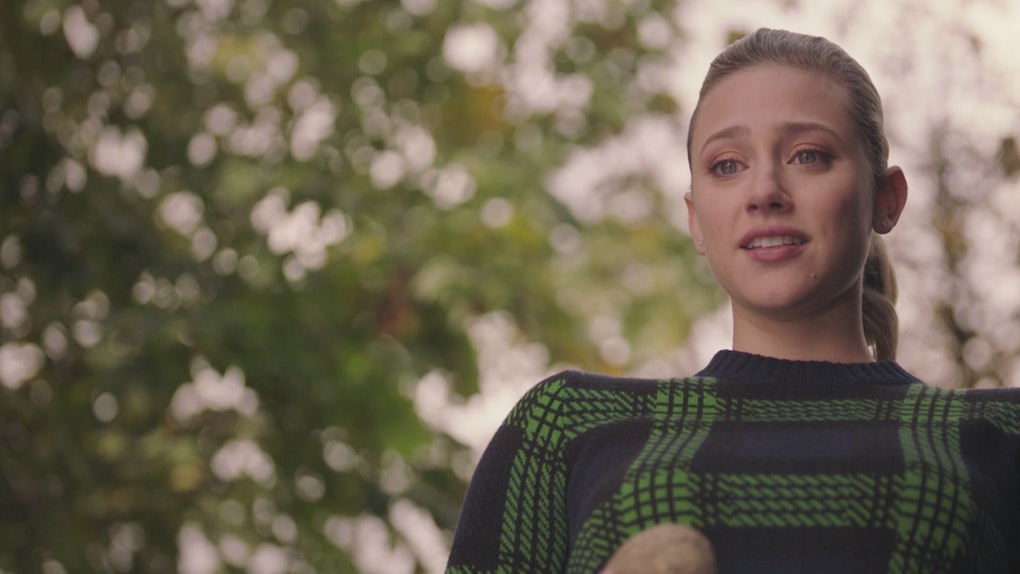 Season 4 of Riverdale has been a rollercoaster for the town's characters and fans alike. Between Archie's vigilante drama, Cheryl's Thistlehouse hauntings, and Veronica's ongoing battle with her father, the season has teased audiences week after week with short, time-jumping scenes that have sparked serious concern for Jughead's safety. Now, after seeing the latest fast-forward, fans are left grappling with the idea that it was Betty may have killed Jughead on Riverdale, a notion that is almost too wild to believe. Suffice it to say, the mid-season finale's final minutes seriously have people concerned.

Spoiler alert: This post contains spoilers from Riverdale Season 4, Episode 9, "Tangerine." Much of the Dec. 12 episode followed Betty, who discovered her mom and sister had been hypnotized and triggered to attack her after a mysterious phone call. With the help of her half-brother Charles Betty traced the calls to the Shankshaw Prison, where Farmie Evelyn Evernever was being held. When Betty paid Evelyn a visit, the cult leader explained that upon hearing the word "tangerine" three times in a row, those who had been hypnotized at The Farm would believe they were Betty, and attack the real Betty in order to kill "Dark Betty."

Yep, Dark Betty is back, and it's sort of unclear whether she's here to stay. After putting herself into the "tangerine" trance, Betty realized the dark version of herself was born when she killed her cat after it was hit by a car as a child. So, she tried to eliminate her shadowy self by going into another trance, revisiting that moment in her childhood and stopping the deadly deed before it happened.

That tactic initially appeared to fix the problem, but the episode's subsequent flash-forward to spring break revealed that might not be the case. The end of the episode showed Betty standing over Jughead's motionless body with a rock, much like the rock she used to kill her cat when she was a kid. "He's dead. What did you do Betty?" Archie asked after checking Jughead's pulse, staring in horror at a frightened-looking Betty.

Though Bughead stans won't be happy about this, there are actually a few reasons to believe Betty is the one who killed Jughead. After apparently getting rid of Dark Betty at the end of the Dec. 12 episode, right before the ominous flash-forward, Betty seemed to summon her bad side yet again, resulting in a cracked mirror and tons of confusion about whether the dark version of herself had really beed eradicated. Plus, don't forget Betty apparently inherited the "serial killer gene" from her father, which could mean she is more inclined to commit murder.

On the other hand, there's still hope Betty might be innocent. Audiences never saw her actually kill Jughead in any of the flash-forwards, and it's hard to believe she would ever kill her boyfriend, even if she does still have a dark side. Plus, many viewers remain unconvinced Jughead is really dead in these time-jumping scenes — I mean, the guy has already been thought dead (and, of course, wasn't) in previous seasons, and there are a number of theories explaining what else could be going on in the spring break scenes.

Fans can only hope the second half of Season 4 provides more insight into this Jughead mystery and (fingers crossed) clears Betty's name from all of it.

Season 4 of Riverdale is expected to resume in January on The CW.

More like this
'Grey's Anatomy' Quotes That Will Heal Your Broken Heart
By Alexis DeCarvalho and Lexi Williams
These Tweets Of 'Girl Meets World' Videos Show Why The Series Is Still Controversial
By Cianna Garrison
When Will 'Riverdale' Season 5 Return In 2021? Its Mid-Season Break Is Long AF
By Rachel Varina
Stay up to date