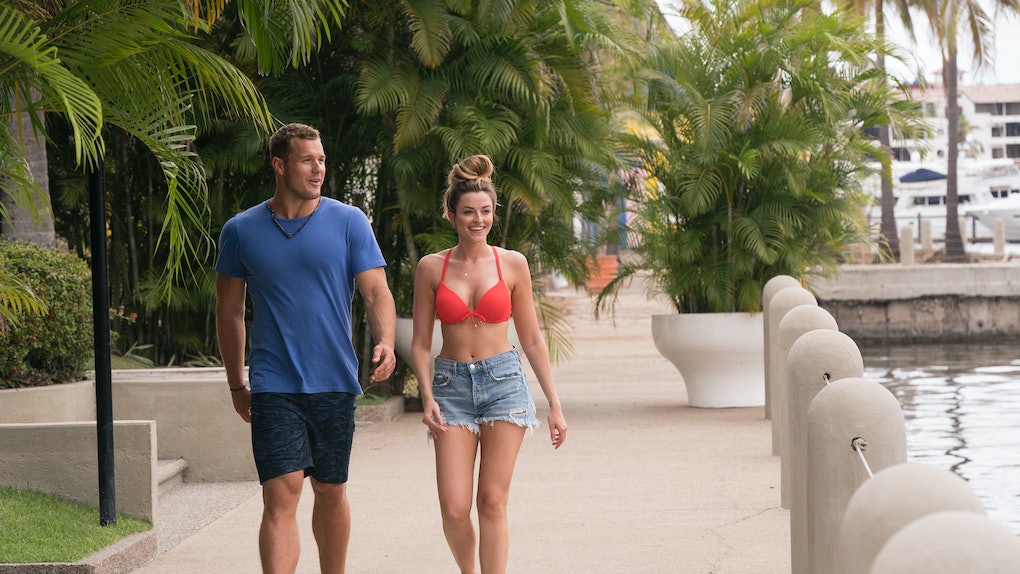 Do Tia & Colton Get Engaged On 'Paradise'? Their New Relationship Status Sounds Serious

The neverending Tia and Colton show seemingly reached its season finale on this week of Bachelor in Paradise when the two finally considered themselves an official couple. Despite Tia's hometown BFF Raven crashing their date and warning her friend about dating Colton, the Arkansas native finally got what she came to Paradise for. For now, it looks like smooth sailing for the pair, so do Tia and Colton get engaged on Paradise? They may look serious, but the jury is a little doubtful about whether a bigger commitment is in store for them.

Going on their second date in Paradise this week, Tia and Colton were surprised by Raven and Adam, the long-lasting couple of Paradise Season 4. From being an underdog on Rachel Lindsay's season to unexpectedly winning over the most popular girl on the beach, Adam is a low-key catch, and Raven definitely knew what she was talking when reminding Tia she deserves the best in a relationship. Tia appreciated Raven's advice, but when Colton finally committed to her, she was sold, even though she had to instruct him to use his tongue in their kisses. The Ross and Rachel of Paradise are back on!

Apart from the still unseen engagement of show alums Ashley Iaconetti and Jared Haibon, the season promo has hinted that we have other engagements to look forward to at the end of the season. As of now, the steadiest Paradise couples appear to be Astrid and Kevin, and John and Jubilee, but none of those people exactly strike me as the type to become engaged after a few weeks in a relationship. Seeing as Tia and Colton definitely love their time in the spotlight, the former NFL player getting down on one knee in front of Tia does seem feasible.

In a deleted scene from the show, they even announced they were boyfriend and girlfriend in a very middle school-esque moment. A couple that feels the need to confirm their relationship that way certainly seems to fit the grand gesture of a televised beach proposal.

After what feels like an entire summer dedicated to Tia and Colton, Bachelor Nation is pretty worn out when it comes to footage of the two. You would think that the potential of a surprise engagement would ease our skepticism about the show spending so much time on an uncertain relationship, but fans still aren't loving Tia and Colton together. It's not necessarily their fault — ABC has just shoved them down our throats so much that it's hard to root for them without bias. On Twitter, viewers speculated about whether an engagement was down the road for Tia and Colton, but the verdict wasn't too positive.

Whether or not Tia and Colton leave Paradise as a couple, Bachelor Nation is already comparing them to Ashley and Jared, who filmed two seasons of Paradise together as friends with relationship complications before finally becoming a couple earlier this year. The Ashley-Jared saga lasted about three years, but it's safe to say that since we were introduced to the Tia and Colton storyline on The Bachelorette, this debacle feels like it's gone on for a hundred years. I wish Colton and Tia the best as their relationship takes the next step on Paradise, but I'll hold off on looking for a wedding present for now.

Bachelor in Paradise continues at 8 p.m. ET on Monday, Aug. 27 on ABC.