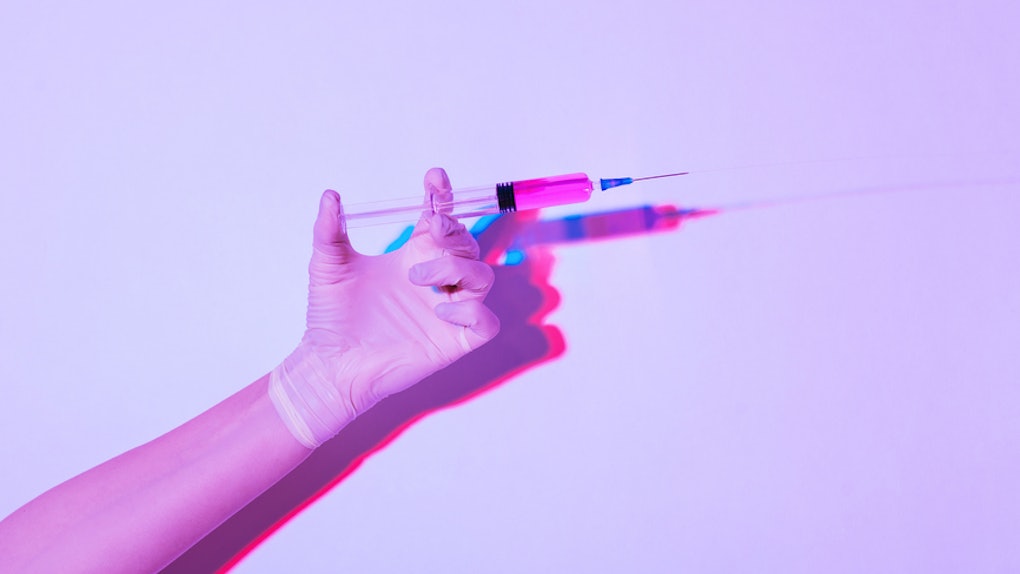 Do STD Tests Check For Herpes? Probably Not & Here's Why

If you've ever hooked up with anyone — even if you didn't go all the way or if you used a condom — you need to get tested for STDs at least once a year. Period. That's according to the Centers for Disease Control and Prevention's (CDC) guidelines, and it just makes good sense. Of course, if you ever notice a rash or bump on your genitals, or experience any uncomfortable symptoms — pain, itching, odor, unusual discharge, etc., you should get tested right away. But here's the thing: do STD tests check for herpes? Not necessarily. And your doctor won't necessarily test you for any STDs without asking you first, so if you'd like a test, speak up.

I spoke to an expert on the subject, Dr. H. Hunter Handsfield, Professor Emeritus of Medicine at the University of Washington Center for AIDS and STD. He told me that most routine STD testing does not include tests for herpes simplex virus (HSV). This might seem shocking, and it is a controversial topic even among doctors. Those who advocate against testing for HSV do have reasons behind their decision. Before delving into those, though, it's important to understand the basics of herpes. For starters, there are actually two different strains of the herpes virus: HSV-1 and HSV-2. Before administering a test, your doctor might consider if you have any symptoms of either strain.

What Is The Difference Between HSV-1 & HSV-2?

HSV-1 is the main cause of cold sores around your mouth. HSV-2 typically causes sores around your genitals. While both strains can appear in both places, Dr. Handsfield says oral HSV-2 is rare. Half of all initial genital herpes outbreaks are a result of having oral sex.

In addition to the difference between oral and genital presentations of the virus, Dr. Handsfield says,"there is no difference in severity of outbreaks between the two [strains], only frequency of outbreaks." If you have genital HSV-1, you probably won't have more than one or two outbreaks. With HSV-2, recurrent herpes outbreaks are much more common.

HSV-1 is much more prevalent in the United States than HSV-2. According to data from the National Center for Health Statistics, 48 percent of the US population has positive blood tests for HSV-1, and twelve percent have HSV-2. Both strains were found to be more prevalent in women than in men.

How Is Herpes Contracted?

"All HSV transmission requires close personal contact," says Dr. Handsfield. You need to actually come in contact with a person who has the virus on an intimate level. Kissing on the lips is lower risk, while using tongue increases the risk of contracting herpes from an infected person. Dr. Handsfield explains that HSV-1 transmission usually requires contact with overt herpes sores, but some cases do occur from contact with people without active outbreaks. Unlike oral HSV-1, people often get HSV-2 from partners who have no visible symptoms of an outbreak at the time of exposure.

There is little to no risk of "catching" herpes simply by being in the same room as someone who has it, or even from sharing their makeup or drinks. Dr. Handsfield says that recent media reports implicating shared lipstick as a way of transmitting herpes can be ignored. "This occurs rarely, if ever," he adds. It is also rare for either type of virus to be transmitted through the environment or by any non-intimate contact. "There's no risk from shared toilets, towels, clothing, showers, etc., and little or no risk from shared drinking glasses, food, or eating utensils," he says.

When Should You Get Tested For Herpes?

"There is controversy about whether and how often sexually active persons should be tested for HSV (in the absence of symptoms of genital herpes), and there is no formal recommendation by any health experts for testing frequency," explains Dr. Handsfield.

In general, he says that only people who know they have been exposed to HSV-2 by a sexual partner should be tested for it. "HSV-2 is a more difficult and less certain issue," he says. "Most positives in fact have genital herpes, can easily infect sex partners, and therefore should know of their infections and inform partners. But an important problem is that the tests aren’t always reliable."

Dr. Handsfield adds that people who are at special risk of HSV-2, for example those who are married to someone who has the infection, should be tested regularly — once a year in most cases.

There is much less of a need for HSV-1 testing, because almost half of all adults will have positive results, but there is usually nothing that needs to be done about it. Most HSV-1 positive individuals will not infect their partners sexually, so there is little need for testing.

Why Don't All Doctors Advocate For HSV Testing?

Most routine STD testing does not include tests for HSV, according to Dr. Handsfield. He says that most experts advise against routine testing in the absence of symptoms, unless of course there is a valid reason you suspect you might have contracted herpes.

Many doctors are afraid that telling people they have herpes, especially HSV-1, will cause more harm than good. There is hesitation due to the possibility of increased anxiety or fear in patients. Dr. Handsfield says that research shows testing for HSV, even with positive results, does not usually have a serious psychological impact, however.

On the other hand, he does say that many people with test results that are technically positive, but only at a very low level, are told they have HSV-2 when in reality they do not. This could potentially cause significant stress and even difficulty developing sexual relationships.

In considering all of the factors, Dr. Handsfield is not opposed to testing sexually active people for HSV-2, especially if they specifically ask for it. He also takes into account "if the context allows proper counseling about likely results, how to interpret them, and what they may need to discuss with partners." But, he says, there are plenty of sexually active people for whom it is best that they not be tested.