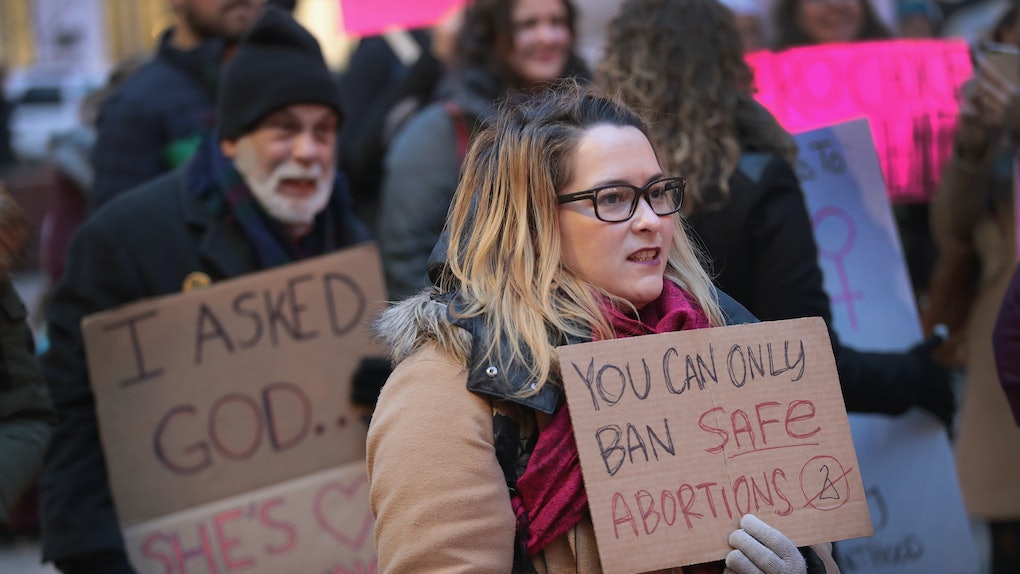 Do Minors Need Parental Involvement For An Abortion? These Laws Can Present Barriers

As 2017 comes to a close, there are currently 37 states that require parental involvement for a minor to get an abortion. That means that anyone under the age of 18 in a majority of America need one or both parents to be part of the decision to have an abortion. There's some obvious logic there: Minors need parental permission to do lots of things, so getting parental permission for a medical procedure makes sense at first thought. However, a new study from Advancing New Standards in Reproductive Health (ANSIRH), which is based at the University of California, San Francisco (UCSF), found that parental notification laws for abortion could potentially put minors at medical risk.

"Proponents of these laws often argue that they’re necessary in order to ensure positive family communication about abortion decisions," Lauren Ralph, epidemiologist at UCSF and the lead author of the study, tells me in an interview for Elite Daily. "But we actually know very little about what happens with respect to minors’ decision-making or their experience accessing care when they are mandated by law to involve a parent."

The study, published on Dec. 13, analyzed almost 1,600 young women seeking abortions in Illinois, where a parental notification law was put in effect in 2013 (meaning that a young woman needs to tell at least one parent before getting an abortion). Overall, the study found no increase in a young woman's certainty in making the decision to get an abortion. Additionally, there was no noted increase in parental support.

More troubling, however, were results from the study that indicated that there were delays in care for young women with the parental notification law in place. After the law was enacted, a higher proportion of young women from outside of the state — from states with even stricter laws — traveling to Illinois to get an abortion were seeking the procedure in the second trimester of a pregnancy, rather than in the first. The longer you wait into a pregnancy for the procedure, the more complex — and potentially dangerous — an abortion becomes (although, overall, abortion is a very safe procedure).

"Since we also see that these laws are associated with an increase in the proportion of minors accessing second-trimester care, it calls into question whether the downsides to these laws outweigh the potential benefit," Ralph says. "Since we see an increase in the proportion accessing second-trimester abortion, that suggests that they’re facing additional barriers after the law goes into effect."

Laws surrounding abortion often hinge on the question of "undue burden," as was the case for the landmark Whole Woman's Health v. Hellerstedt Supreme Court case. Basically, that means that courts have to measure if the benefits of a law outweigh the negatives. If they don't, it's considered an unconstitutional undue burden.

"I think that our research definitely calls into question the utility of laws that mandate parental involvement in a minor’s decision to have an abortion," Ralph says.

Before the law went into place, about two-thirds of minors already involved a parent in the process to get an abortion, the report says. And, as mentioned, parental involvement did not improve parental support or how certain young women felt in their decision to get an abortion. Meanwhile, there were the questions of barriers to care. In addition to the increase in second-trimester abortions, the researchers found an overall decrease in minors seeking abortions — although the report did not look into the reason for that.

While parental involvement can often be helpful for a teenager, there are many cases where the law would present more of a barrier. (If a teenager is unable to fulfill the parental notification requirement, there is an option to seek a "judicial bypass" — i.e. go to court and get a judge to allow them to get the medical procedure. It's a tough bind for teenagers.) This barrier is not limited to teenagers being nervous about telling a parent — consider, for instance, teenagers with abusive or incarcerated parents. For them, these laws are a much more serious barrier to care.

The effects of a law as simple-sounding as parental notification can be wide-ranging, and it's important to consider every woman. Anti-abortion politicians often state that a law is enacted to "protect women," but studies like these show what's going on in reality. More often than not, all that laws around abortion do is make accessing health care even more difficult for women of all ages.

More like this
The Woman Behind @NorisBlackBook Is Serving Hilarious Kardashian Commentary On IG
By Lara Walsh
Daily's Poptails Frozen Alcoholic Pops Are Wine-Based, Fruity Treats
By Cianna Garrison
Why Can't I See Instagram Story View Counts? Here's The Deal
By Lara Walsh
Stay up to date