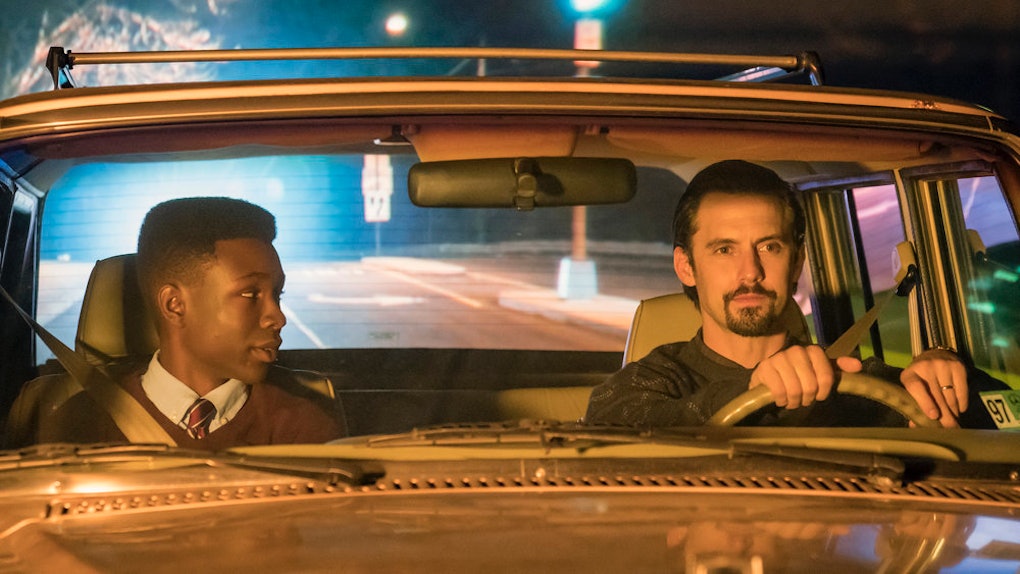 Do Jack's Kids Know About His Brother On 'This Is Us'? We Got Another Piece Of Jack's Old Life

We've been waiting for weeks for the show to get back to the subject of Jack's suddenly introduced brother, the one we found out died in 'Nam. What we didn't know was that we'd finally have that storyline raise it's head again, on "Number Three," Randall's story. But this raises a fascinating question, and Jack detours on the way on home to the Vietnam Wall and admits to Randall that Rebecca doesn't even know the truth about his service during the war. So, do all Jack's kids know about his brother on This Is Us? Or did Jack go to his grave, and only Randall ever knew that there was the name of Pearson up on that wall in DC?

This is a huge admission for Jack, and proof that, despite what others might think about his time in AA, the man is really changing. He's opening up. He's admitting to all those feelings he's had buried deep, and been drinking to forget. And he's admitting them to Randall, who is the son he understands the least, but is most proud of.

That's a hell of a thing. Jack is most comfortable telling the real truth of his life to Randall. Now it's Randall who knows about Jack's real life before Rebecca, Kate and Kevin. They don't even know. Will he tell them before he dies? Because if it's Randall who after the funeral is all "oh, by the way..." Well, that might just explain why Kate and Kevin always seem to be on one side, and Randall on the other.

Still, knowing that Jack is mere weeks from his last day on his earth at this point in the season, that might also be one of the last heart-to-hearts he and Randall ever have. In fact it might be *the* last heart to heart they have.

And that's big. Because Jack may have been more real and more straight forward with Randall than he's ever been with either Kate or Kevin. Feeling like you don't fit in with the world around you is something Randall's felt all his life. And it's something Jack can understand because it's how he felt after the war. Whereas Kevin? He's having what one might call "a successful high school career." This is the time when he fits in wherever he goes. He won't experience that sensation of feeling out of place until years later.

Kate will feel out of place, and soon. I believe in a way, she does now. But in truth, Kevin protects her from it the best he can.

Jack can't relate to their lives as much. He didn't have a successful high school career as a football player. He never contemplated a career in the arts. These weren't choices open to him. He's done what he set out to do: He gave them lives that his father couldn't give him. He raised them in a middle class manner he never had. But in doing so, he's also raised children who he can't truly connect with.

There's only one kid who's experienced a little bit of what Jack's been through, even though it's not in the same way. That's Randall. For the first time we see Jack connect with one of his kids, tell them the truth about who he is, and be able to give real advice on how to handle it going forward.

The truth is, Randall will find his world, he's gotten the first glimpse at Howard. The world will twist itself upright and for a while and he'll feel like he fits.

And then one day, it won't anymore, like when he had the nervous breakdown. But then things will come back. And he'll be upright, delivering his own kid on the floor of the kitchen.

And Jack won't be there to see it. Oh, how right Jack is, and he doesn't even know. Jack won't even live to see the day Randall enters Howard. But Randall will have made the right decision. He'll own who he is.

Jack would have been proud.

More like this
These Tweets About Regé-Jean Page Leaving 'Bridgerton' Are Royal Bummers
By Cianna Garrison
The 'This Is Us' Season 5, Episode 14 Promo Teases Another Beth Story
By Ani Bundel
Why Isn't 'This Is Us' Airing On April 20, 2021? Season 5 Is On Another Break
By Ani Bundel
Stay up to date