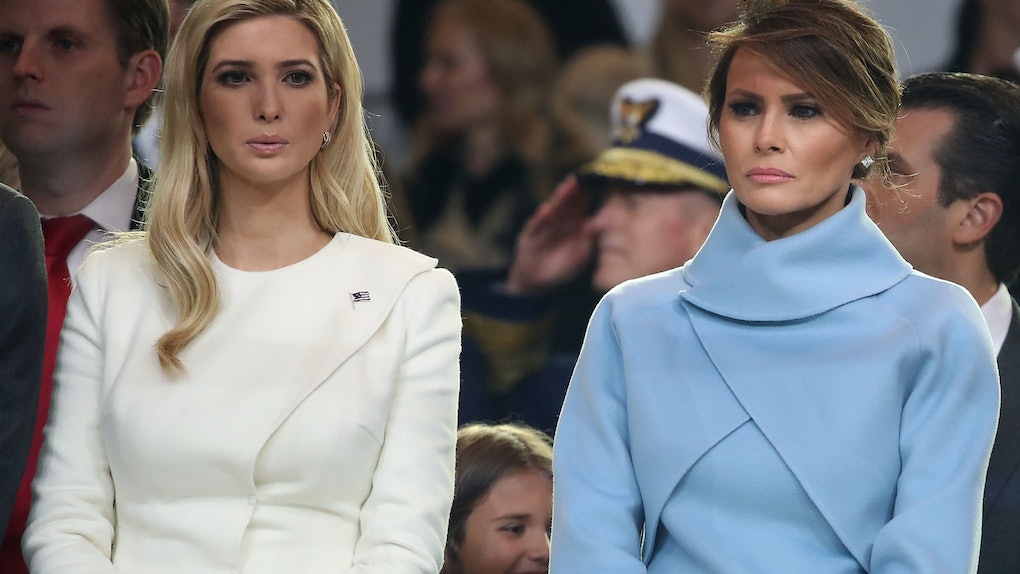 Do Ivanka & Melania Trump Get Along? The Answer Is Kind Of Complicated

Ivanka and Melania. Melania and Ivanka. The two Trumps who, many in the White House hope, can alchemize the president into something a little more palatable, a little more family friendly. Softer. The two women are often described in terms of their relationship to the man in the Oval Office, but never in terms of their relationship with each other. So what's the deal with Trump's two top women? Do Ivanka and Melania get along?

There's no easy answer to that question. Not really, anyways.

And there may be a reason for that. The two media-friendly Trump women, who have given interview after interview to myriad publications over the years, rarely talk about one another. That's not particularly shocking, though: it would be strange to expect a mother-daughter relationship or anything of the sort from the two women, given the circumstances. Ivanka is the grown daughter of President Trump; she was already 24 years old when Melania married her father in 2005, and there's only an 11 year age difference between the two. In any other circumstance, you probably wouldn't expect more than a cordial relationship, or something of grudging respect — maybe a friendship, in rare circumstances. But it's not like Melania helped raised Ivanka. Though Melania herself knows that — and that fact may give us an idea of their relationship.

In a 2016 interview with Harper's Bazaar, Melania said of her husband's grown children, "They are grown-up. I don't see myself as their mother. I am their friend, and I'm here when they need me."

This is a pretty important detail: Melania considers herself a friend to the elder Trump kids' — including Ivanka.

And while, again, there's not a lot of information about Ivanka and Melania specifically, there is a 2012 Huffington Post blog from one Nicole Bryl, who is (or at least was, at the time) Melania's make-up artist. She gave an inside look, if you will, to the Trumps, and there is an important little nugget of information. Bryl wrote, "All the Trumps are quite family dedicated actually, they are a seriously close knit family."

One more recent detail about the Ivanka-Melania relationship paints it as one of strained interactions. In a May 2017 Vanity Fair article on the Trumps' marriage, the magazine described Melania and Ivanka's relationship as having a "frostiness" to it, according to two sources. The tension was apparently in large part thanks to the strain of Melania's decision to stay in the New York for the first six months of the Trump presidency. "Stepping in for Melania has also been an obligation" for Ivanka, according to the magazine.

But, for what it's worth, another source told the magazine that their relationship is "fine." The communications director for the first lady, Stephanie Grisham told the magazine, “Ivanka and Mrs. Trump have always shared a close relationship, and that continues today.”

So, once again, that's a big old shrug emoji, though it's leaning toward, yeah, they get along, but they have their problems.

But then there's also evidence, straight from the horse's mouth, that they have a very positive relationship.

Ivanka discussed Melania with People in July 2016, telling the magazine,

Melania is an unbelievable mother. It’s pretty uncommon for wives of candidates to not be on the campaign trail every day. And she made a decision I totally respect, which is that she has a young son, he needs stability, he needs routine. My father’s traveling so frequently, and she is an unbelievably consistent, loving and reliable figure in Barron’s life.

Melania is an inspiration to Ivanka, parenting-wise, according to that same interview: “She takes [Barron] to school every day, picks him up every day. It’s a really remarkable thing and she’s a great inspiration to me as I raise my own children in terms of family first and having the right priorities."

Seems like a pretty glowing review of her father's wife, if you ask me. But at the same time, this was an interview given in the middle of a hugely contentious campaign in which Ivanka played an instrumental role: humanizing her father (and, to an extent, Melania, who was criticized for being cold and absent from the campaign trail). So we should maybe take her words in this interview with a grain of salt.

But there's also evidence that the two women get along in Ivanka's latest book: she thanked the first lady for her "support and friendship" and said she had a "heart of gold." That seems like pretty solid evidence that they like each other. Again, though, Ivanka is a master of spin, so it's difficult to know if this is a genuine sentiment or a carefully controlled PR move.

And, of course, there are plenty of pictures of them standing next to each other at various events, both official and casual. But, again, this doesn't really tell us anything overt. It just tells us that these are two women who both work at the White House because they are related to the president. It tells us that they are part of a blended family. Not exactly groundbreaking stuff. (Though the below picture at least shows us that they probably like each other well enough.)

So, do they get along? Probably. At the very least, they're not throwing side-eyes at each other or getting into brawls. But of the many, many leaks from the White House, this is one detail we may never know for sure.

More like this
The Tweets & Memes Of Doug Emhoff Waving To Kamala Harris Hype The Supportive Spouse
By Cianna Garrison
These Tweets About The Bidens' Photo With The Carters Ask A LOT Of Questions
By Rhyma Castillo
Biden's American Families Plan Includes Some Free College, Which, Wow
By Rhyma Castillo
Stay up to date