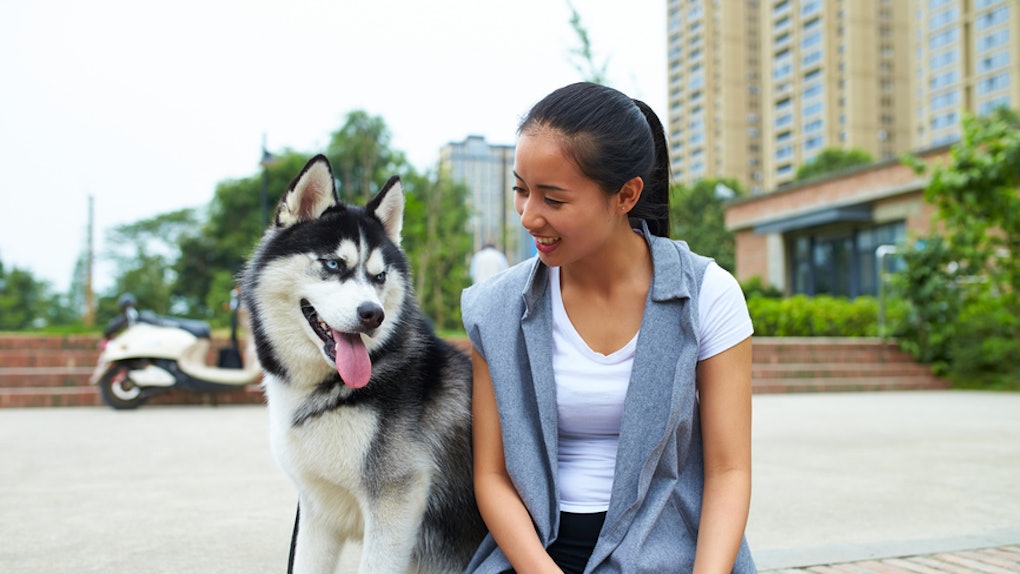 Do Dogs Like Baby Talk? Science Says You & Your Fur Baby Will Benefit From It

Do you ever find yourself talking to your dog as if he or she is your baby? For me, it's almost an inevitability that, if a puppy walks by me, I'm going to start cooing to it like it's a child in a stroller. Most people probably do this without even realizing the connection, and so you might never have actually wondered whether dogs like baby talk to begin with, or if it's totally for your own satisfaction. As it turns out, though, your baby talk with your dog may serve a real purpose for both you and your pup.

Huffington Post UK reports that findings from a new study, which comes from the University of York, have revealed some pretty surprising information about how dogs respond to baby talk. The main takeaway appears to be that talking to your fur baby like they're your actual baby is a total win for all parties involved. You get to indulge your parental side without potentially having any real children, and your dog gets to connect with you emotionally for longer periods of time.

The study, which was published in the journal Animal Cognition, looked at people's relationships with their adult dogs, with the intent to measure whether the pups preferred "dog-directed speech" (DDS) — aka your baby voice — or "adult-directed speech" (ADS), which is basically just any ol' thing you'd say to another human. The results of the study revealed that the adult dogs were significantly more responsive when a person spoke to them using DDS rather than ADS.

To understand what "dog-directed speech" actually means, you first have to know what infant-directed speech (IDS) is. According to this study, IDS is defined as "a special speech register thought to aid language acquisition and improve affiliation in human infants," while DDS was more loosely defined in the research as a "functional...overgeneralisation of IDS within Western cultures." In other words, we all tend to speak to dogs the same way we would typically talk to babies. But does it actually work to strengthen the relationship with your pup? This study argues that it does.

Researchers compared both the content (words) and tone (voice style) associated with adult-directed speech and dog-related speech, respectively, in separate experiments, so that they could monitor each variable against a constant. In terms of content, dog-directed content included phrases with words like "dog" and "walk," while adult-directed content included phrases that had no words a dog would be likely to understand, such as, "I need to go do some errands."

The study found that the most effective way to talk to adult dogs is to talk with both dog-related content and tone, meaning a slightly higher pitch than the one you'd probably use in conversation with an adult human.

Huffington Post UK does point out, however, that this study's results seem to contradict previous studies, which "suggested talking in a baby voice improved engagement with puppies but made little difference with adult dogs." In other words, it might be best to take this study with a grain of salt. But in the meantime, it's an excellent excuse to coo to your fur baby all damn day, to your heart's content.

Although the study didn't provide any conclusive reasoning for why dogs seem to prefer a higher tone of voice, the findings did suggest that this could be the result of conditioning over the lifetime of the dog: We talk in baby voices to them when they're puppies, and they learn that they will be rewarded for responsiveness, and so, they eventually look for that specific type of speech.

Another potential reason for why dogs prefer dog-directed speech could be evolutionary, the study argued. If your tone of voice is higher, that might indicate to your dog that you're feeling friendly and non-aggressive, and that it's safe for them to interact with you.

Either way, the benefits of speaking to dogs via this type of dog-directed speech appeared to draw a concrete positive reaction.

The results of the study revealed an increased attention span from the dogs, and argued for the potential to increase emotional connection between dog and owner through dog-directed speech — aka baby talk.

Bottom line: The next time you talk to your dog (especially if you're trying to teach them something), you should feel no guilt whatsoever if you're talking to them in a tone that's five decibels higher than your normal one. Not only is it natural, but it'll help out the both of you in the long run.

More like this
These 40 Clever Vaccine Selfie Instagram Captions Deserve A Shot On Your Feed
By Rachel Chapman
36 Best Comments To Leave On Instagram For Your Bestie
By Rachel Chapman
Your Mars Sign Meaning Reveals A Lot About Your Sexual Needs, So Take Notes
By Roya Backlund
Stay up to date