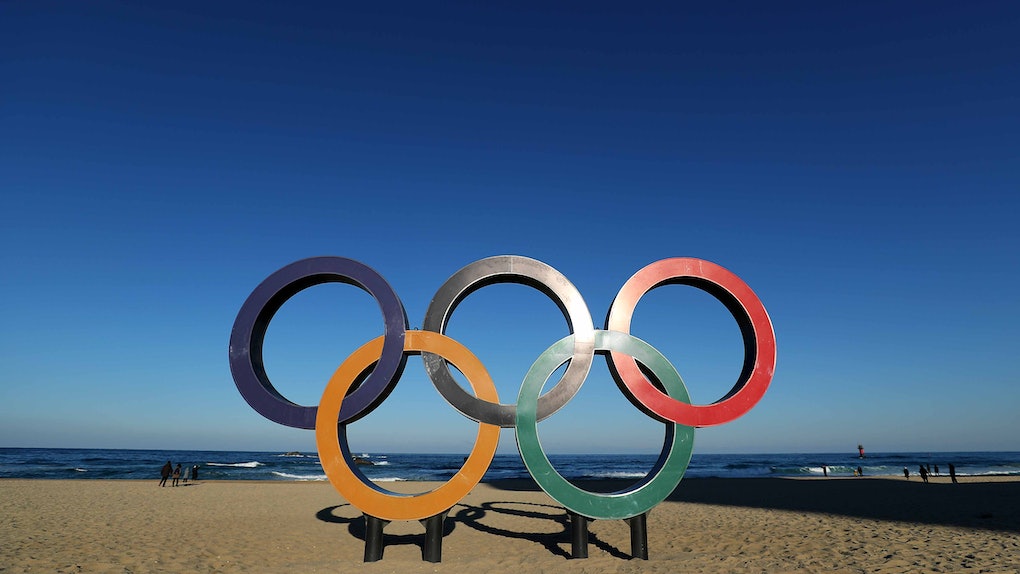 Do Athletes Have Sex In the Olympic Village? It's Pretty Inevitable, So Here's What We Know

Every two years, we watch Olympians battle it out to bring home the gold. But as it turns out, no matter how incredible their performance on screen, the vast majority of scoring they're doing is likely off the field. What I am getting at here is, Olympians probably be bangin’ — a lot. You may be surprised to learn that if you put a couple hundred young people in peak physical condition together, it’s pretty much guaranteed that there will be athletes having sex in the Olympic Village. I know, shocking!

But apparently, things do get really crazy. "Athletes are extremists," American Olympic soccer player Hope Solo told ESPN. "When they're training, it's laser focus. When they go out for a drink, it's 20 drinks. With a once-in-a-lifetime experience, you want to build memories, whether it's sexual, partying, or on the field. I've seen people having sex right out in the open. On the grass, between buildings, people are getting down and dirty."

With the 2018 Winter Olympics, this time being held in Pyeongchang, South Korea, less than a month away, what better time to consider what might go down (literally and figuratively) in the Olympic Village. While we'll only ever get a tiny peek at what is actually happing in this beautiful-people bacchanal, here's what we do know about what happens behind the (hopefully) closed doors in the Olympic Village.

1. Athletes Are Most Definitely Getting It On

If you are looking to get lucky in the Village, it seems there's no shortage of people with the same idea. In a 2012 interview with ESPN, in terms of how many Olympians might be hooking up in the ole Village, swimmer Ryan Lochte said, "I'd say it's 70 to 75 percent of Olympians. Hey, sometimes you gotta do what you gotta do.”

2. The Complimentary Condoms Are Flowing

The good news is that all those folks doin' the deed are practicing safe sex, thanks to the veritable rivers of free condoms that are flowing in the Olympic Village. Giving out condoms to the the Olympians started 20 years ago at the 1988 olympics in Seoul, according to Slate. The number of condoms provided has mostly gone up over the years, topping out with a whopping 450,000 at the 2016 Rio Olympics, as reported by Folha de São Paolo, a Brazilian newspaper.

3. The Close Quarters Make It Easy To Really Get To Know One Another

The Olympic Village, with its simple shared rooms and common spaces, has been likened to a dorm (at least for the Pyeongchang Olympics this year), and those close quarters have created a culture that's been compared to the first day in college. Everyone mixes and mingles and gets to know one another, making it easy to find a hookup.

4. Dating Apps Get Heavy Use

Turns out, Olympians are just like us — in that they love a good dating app swipe session. In addition to all the face-to-face mingling, many of the athletes reportedly use dating apps to find a date. "Many of the athletes prefer to meet other athletes on Tinder and other dating apps because that's easier, and then they do group dates with other athlete friends," a source claimed to E! News. "Many of these women and men have been out of the dating game or never in the dating game before the Olympics, so it's a lot to take in for these athletes, especially after training so hard to be here."

5. Outdoor Sex Is No More For Olympians

How out of control do things actually get in the village? Well, there's no telling completely unless you're in the village yourself. However, according to TIME, the Olympic Association once literally had to ban outdoor sex. Apparently, many reports about rooftops littered with condoms in the 1988 Seoul Olympics abound, hence the subsequent ban.

It seems like there is really only one rule about all things ~sexy~ in the Village: What happens there stays there, Vegas-style, at least that's what former Olympic swimmer Summer Sanders told ESPN. But obviously, even that rule gets broken. How else would we know all these juicy deets?

I don't know about you, but now, all I am going to be thinking of during the 2018 Pyeongchang ceremonies is who is going to be hooking up with whom and how I can get in on that hot, athletic action.

More like this
Making Love Vs. Having Sex: Here's How To Tell The Difference
By Anjali Sareen Nowakowski
27 Morning Sexts To Send Your Partner To Put A Smile On Their Face When They Wake Up
By Rachel Shatto
How To Not Get Pregnant After He Came In You & You're Freaking Out
By Rachel Shatto
Stay up to date