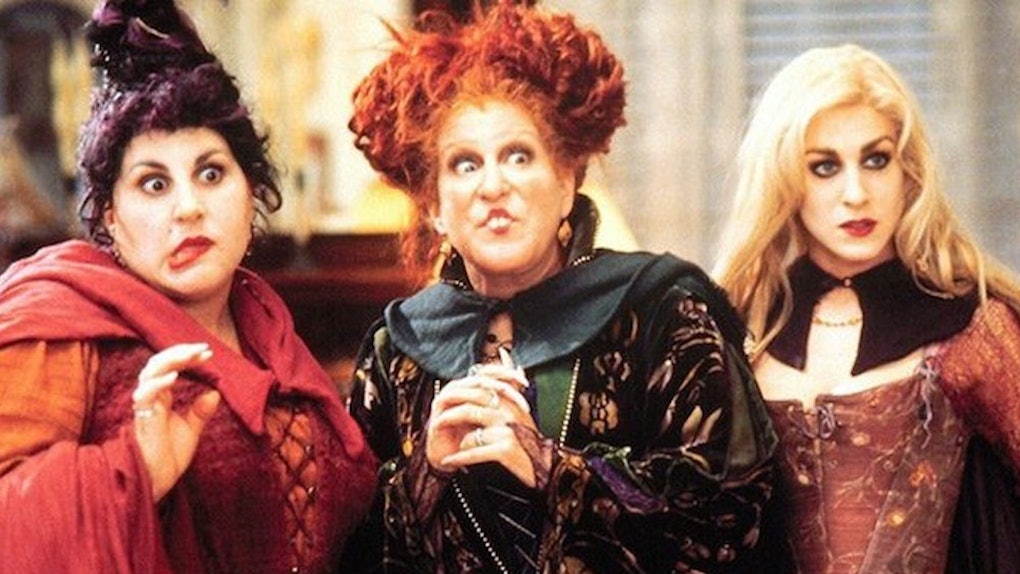 DIY ‘Hocus Pocus’ Halloween Costumes For You & Your Sanderson Sisters

"Oh, look! Another glorious morning. Makes me sick!" If that iconic Winifred Sanderson quote is one of your go-to catchphrases, you're probably a Hocus Pocus fan. The 1993 movie favorite is an October entertainment staple (I keep it in heavy viewing rotation all month long), so it's the perfect time of year to dress up as its most witch-tastic characters. If you're hoping to create some DIY Hocus Pocus costumes this year, you don't have to possess an ancient spellbook. All you need is a love of all things spooky and a little imagination. Dost thou comprehend?!

Being a witch on Halloween is cool (and probably one of the most popular costumes of all time for all ages), but being a Sanderson sister is that much more creative. The pop culture throwback is a great way to channel a beloved cult classic that pretty much any child of the '90s will appreciate. If you're hoping to put a spell on everyone at your upcoming Halloween bash, Hocus Pocus costumes are the way to go — especially for an enthusiastic group. Here are some ideas that will help you achieve the film's unforgettable ensembles. Just don't forget your lucky rat tail.

Dani is the sassy little sister audiences can't help but root for. She's in her own Halloween costume for pretty much the entirety of the film, but her version is more about cozy comfort and less about scaring people in her trick-or-treating path. In order to capture her bohemian witch vibes, a snuggly knit sweater in an orangey red, witch hat, and some serious matte crimson lips should do the trick. Etsy sells a spot-on replica, but you might want to see if you've got the goods (mostly) on hand.

Max has got that effortless, 1990s Cali teen thing going for him. He might have stood out in Salem, but his low-key style just makes him seem that much more chill (even if he's really not that chill).

The Sanderson sisters clearly have a look. They've been rocking the same medieval frocks for years, their hair dos are extreme to say the least, and they clearly don't fly (on broomsticks) under the radar. If you're not into buying pre-packaged versions of Winnie, Sarah, and Mary, there are options. Got capes? You're in luck. An oversized, red, lace-up number should work for Mary (Kathy Najimy), a green cape (a strategically placed scarf will do) and black dress channels Winifred (Bette Midler), and a corset transforms any mortal into Sarah (Sarah Jessica Parker). Wigs are a must unless you're a bobby pin wizard.

Salem's local bullies aren't exactly nice dudes, but I absolutely must give props to their out-there sartorial choices. They're small town risk takers! It's up to you if you want to shave a word into your hair, though...