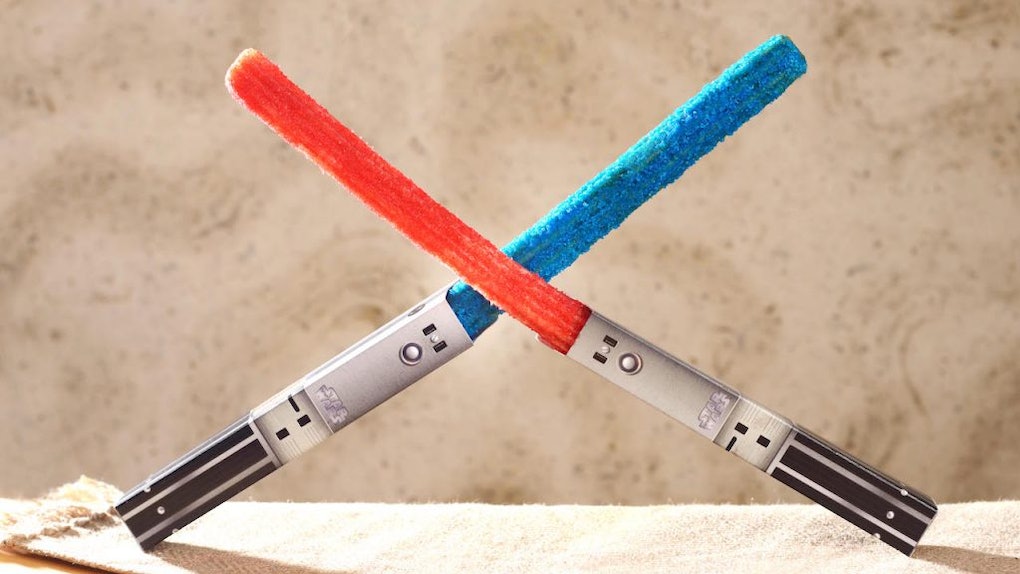 Disney's Lightsaber Churros At Hollywood Studios Are Coming Back, So Rejoice

If you're a dedicated Disney-goer, then you've probably walked around one of the theme parks with a churro at hand. Maybe it was the summery Pineapple Churro, or maybe it was the Insta-worthy Rose Gold Churro. Either way, it was probably colorful and delicious. If you've ever ventured through a Disney theme park snacking on a fierce Lightsaber Churro, you'll be happy to know that they're going to be available again. That's right, Disney's Lightsaber Churros at Hollywood Studios are coming back, and it's for a good reason.

According to an April 18 post by the Disney Parks Blog, blue and red Lightsaber Churros will be coming back in May 2019 for a limited time. You'll be able to grab them throughout Disney's Hollywood Studios starting on May 1, so plan your vacations accordingly. Why Hollywood Studios, you ask? Well, the theme park is honoring its 30th anniversary, and it wants to celebrate with you. In order to do so, it's offering an array of limited-time goodies on site that you'll definitely want to try (including the Lightsaber Churros, of course).

If you missed the Lightsaber Churros' Disneyland debut in 2017, let me catch you up. Thankfully, the returning treats look super similar to the originals.

According to Disney Parks' recent blog post, the upcoming Lightsaber Churros will be dusted in blue or red sugar (so choose your favorite color). Based off of a photo of the Star Wars-inspired treats (above), I'm assuming that they'll come with a decorative lightsaber handle instead of plain old parchment paper. That'll come in clutch if you're hoping to take photos with the churros to honor the park's anniversary (hello, Instagram).

Now that you know more about the Lightsaber Churros, you're probably wondering where you can get them. Since their return is honoring the 30th anniversary of Disney's Hollywood Studios, you'll be able to find them at various churro carts on site, per Disney Parks. In addition to the churro carts, you'll be able to score a Lightsaber Churro at Pretzel Palooza, the Market at Pixar Place, and Anaheim Produce. With that being said, you'll have plenty of options in case you buy one and want seconds (or thirds) throughout the day.

If you're excited for a Lightsaber Churro, head to Disney's Hollywood Studios in May 2019 and give one a try. Just keep in mind that they'll only be available for a limited time. Elite Daily reached out to Disney to see how long they'll be on sale for, but did not hear back by the time of publication.

Those of you honor the 30th anniversary of Disney's Hollywood Studios in the park can also try a few more celebratory snacks. According to Disney Parks, some of those goodies include the Kylo Ren Cupcake, Incredibles-inspired macarons, the Playful Luxo Ball, The Sorcerer’s Hat sponge cake, and more.

Needless to say, you'll be all set in the snacks department when you visit Disney's Hollywood Studios next month. If you're curious about the other limited-time anniversary treats, check out Disney Parks' post about the goodies.