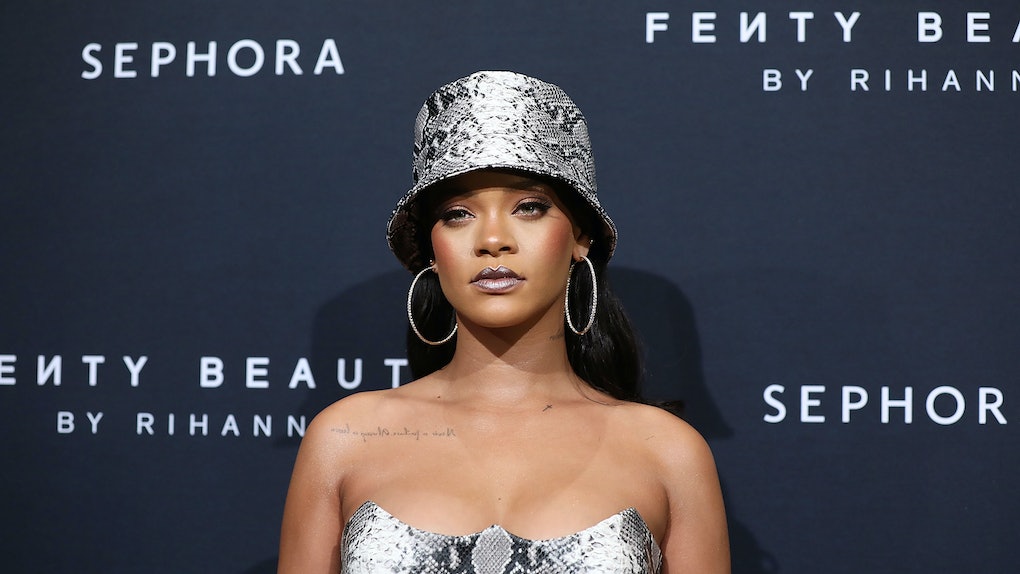 Did Rihanna Watch The Super Bowl? She Just Reiterated Her Support Of Colin Kaepernick On IG

In case you blinked and totally missed it, the 2019 Super Bowl took place on Sunday, Feb. 3. The only reason I know this news is because I'm a sucker for commercials, OK? But while we were all busy watching the New England Patriots defeat the Los Angeles Rams, it seems like some other celebs simply couldn't be bothered — and it looks like our girl RiRi might be one of them. So, did Rihanna watch the Super Bowl? The singer threw shade at the big game for a really important reason.

So let's start with the basics: where was Rihanna while the Super Bowl was going down? Was she scarfing down nachos with friends at a bar? Was she switching screens between the football game and the Puppy Bowl from the comfort of her own home? It turns out she was actually on an airplane while the big game was going down. She took to her Instagram Story to show how her night was going — and no, it didn't include the Super Bowl at all.

In the video, you see Rihanna looking straight into the camera (with shades on), alongside the caption, "How can we watch super bowl on the flight? Me:" seemingly trolling other passengers in flight who were requesting the game be put on, and let me tell you, it is a big mood:

In case you didn't know for sure whether RiRi DGAF about the Super Bowl, this was as good a sign as any that she was absolutely not feelin' it.

She also shared a second video that zoomed in on a passenger a few rows behind her on her first-class flight, with "weirdo" sticker dangling above the passenger's head (I'm guessing he's the one who was aking about the game):

If you're wondering why she labeled the passenger a "weirdo", your guess is as good as mine. I think it's *perhaps* because that particular passenger was watching the Super Bowl (or trying to) mid-flight, but the world may truly never know this for a fact.

But in all seriousness, I would have banked on Rihanna refusing to watch the Super Bowl, given the fact that she's been very open about supporting ex-NFL star Colin Kaepernick, who many believe has been blacklisted by the NFL after kneeling during the national anthem in peaceful protest against racism and police brutality.

And a quick FYI about that: back in May 2018, the NFL changed its policy regarding the national anthem, and forbade players from sitting or kneeling during the anthem, with the exception that players were no longer required to be on the field — meaning that they could choose to remain in the locker room as the anthem was performed.

Among many other celebs, Rihanna showed her support to Kaepernick by boycotting the Super Bowl, and posted an illustration of the former quarterback kneeling, writing the caption, "For those of you who thought I was watchin super bowl... we beefin."

If you're still not getting the idea, let's make this even clearer: this is essentially Rihanna's opinion of the Super Bowl this year:

And remember, you guys, that Rihanna was reportedly one of the musicians who turned down the opportunity to perform at this year's halftime show, with sources telling Us Weekly, "They offered it to her but she said no because of the kneeling controversy. She doesn’t agree with the NFL’s stance." As we are all very well aware of now (thanks to Adam Levine's nipples), the NFL offered the gig to Maroon 5, who accepted and gave a performance that had plenty of mixed reactions.

The only other question surrounding this is, of course, whether or not RiRi tuned in to the Puppy Bowl, because there's not a single soul on this earth who can boycott those precious pups.

Now that's a touchdown if I've ever seen one.