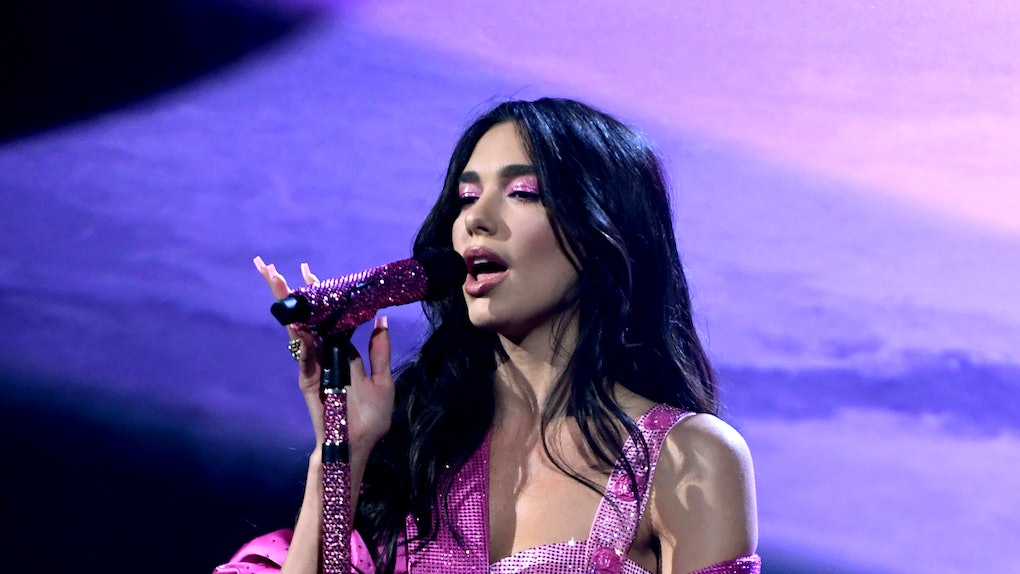 Did Dua Lipa Lip Sync At The 2021 Grammys? Fans Are Genuinely Asking

Dua Lipa glittered down the Grammy Awards red carpet on March 14 and delivered an equally-as-showstopping performance. However, after she hit the stage, there was one question on fans' minds: Did Dua Lipa lip sync at the 2021 Grammys? Fans seemed to think so, and it soon became the talk of Twitter.

Lipa hit the stage alongside DaBaby, and, together, they got the party started with a rocking performance of "Levitating" before switching things up and diving into "Don't Start Now." The high-energy anthems got the crowd dancing, but not everyone was sold on Lipa's singing.

"Dua Lipa’s album was great but the only two performances of her’s I’ve seen are this and SNL and in both instances the lip sync was really visible," one fan tweeted after watching. "Is dua lipa even trying to lip sync rn or she just doesn't even care lol," another fan questioned.

Still, Lipa seemed to be riding high on music's biggest night. Ahead of the show she told E!'s Giuliana Rancic that after a strange year, she's grateful her music can resonate with people. "It's amazing in such a crazy time," she said, admitting that she couldn't have imagined "in a million years I'd be putting out my record and promoting it from my sofa." She added, "I'm just so grateful for the response, in that this has been there for people during this time. I'm just thrilled."

You can see the speculation about Lipa lip syncing below.

Whether she lip synced or not, there's no doubt Lipa had an epic night. The six-time Grammy nominee hit the red carpet in a sparkling gown from Versace that commanded attention. And with her major category nomination for Album of the Year thanks to her record Future Nostalgia (which she lost to Taylor Swift, but still), Lipa was shining brighter than ever.

More like this
Are BTS & Coldplay Collaborating On A Song? Here's Why Fans Think It's Happening
By Michele Mendez
With 'Like Water,' Wendy Found Her Biggest Cheerleaders In Her Red Velvet Bandmates
By Michele Mendez
Big Hit's Response To Rumors BTS' 2021 Comeback Is In May Is Making ARMYs Suspicious
By Michele Mendez
Stay up to date