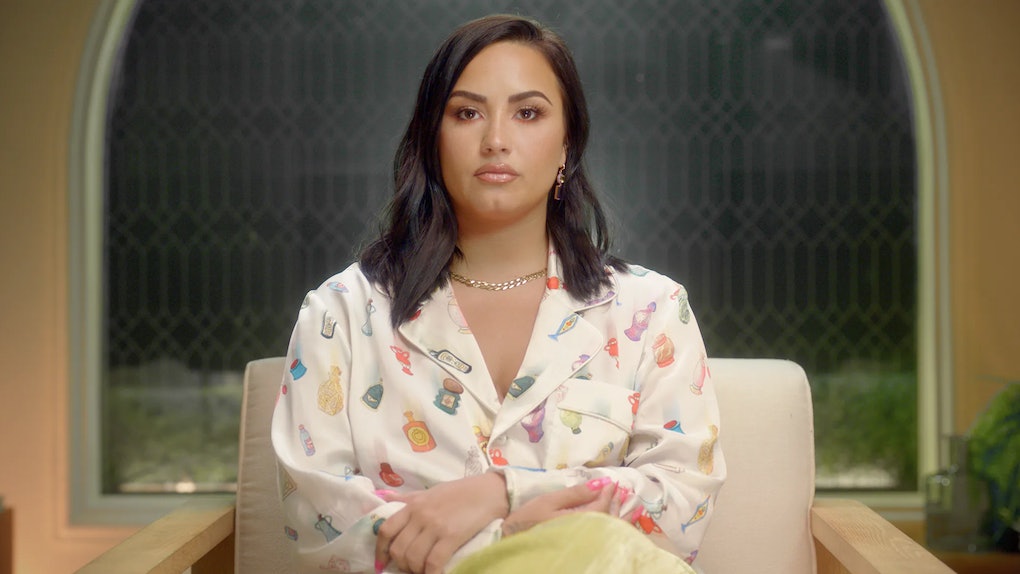 In a new teaser for her new documentary series Dancing With The Devil, Demi Lovato's sexual assault claims are truly heartbreaking to hear. (Content warning: This story discusses rape, sexual assault, self-harm, eating disorders, and substance abuse.) "I lost my virginity in a rape," Lovato claimed, describing an incident that allegedly took place when she was a teen during her Disney Channel days. "I called that person back a month later and tried to make it right by being in control and all it did was just make me feel worse."

She added, "I really beat myself up for years, which is also why I had a really hard time coming to terms with the fact that it was a rape when it happened. We were hooking up but I said, 'Hey, this is not going any further. I'm a virgin and I don't want to lose it this way.' And that didn't matter to them, they did it anyways. And I internalized it, and I told myself it was my fault because I still went in the room with him. I still hooked up with him." According to the Rape, Abuse & Incest National Network (RAINN), an anti-sexual violence organization, rape is never the survivor's fault; there is no one "correct" way to behave during and after the assault.

After that incident, she said she had to see her alleged rapist "all the time," and developed unhealthy coping mechanisms as a result. "So I stopped eating and coped in other ways — cutting, throwing up, whatever. My bulimia got so bad I started throwing up blood for the first time," she said. "I'm coming forward about what happened to me because everyone that that happens to should absolutely speak their voice if they can and feel comfortable."

As for the alleged rapist, Lovato said there were no repercussions for their actions. "F*ck it, I'm just going to say it. My #MeToo story is me telling somebody that someone did this to me and they never got in trouble for it," Lovato shared. "They never got taken out of the movie they were in. But I've just kept it quiet because I've always had something to say and it's like, I don't know. I'm tired of opening my mouth. So there's the tea."

Lovato alleges she was sexually assaulted again the night of her near-fatal overdose in 2018. According to the singer and actor, her drug dealer allegedly took advantage of her and left her "for dead" after giving her a potentially deadly mix of heroin and other drugs. She recalled coming to terms with the memory of the assault when she woke up in the hospital and the doctor asked her if she'd had consensual sex.

“I remembered him lying on top of me, so I said, ‘Yes,'” she said, later adding, “It wasn’t until maybe a month after my overdose that I realized, ‘Hey, you weren’t in any state of mind to make a consensual decision.' That kind of trauma doesn’t go away overnight.” According to RAINN, a person cannot consent to sex if they're intoxicated or incapacitated by drugs or alcohol.

In order to cope, Lovato attempted to "take the power back" by abusing heroin again.

“I wish I could say the last night that I ever touched heroin was the night of my overdose but it wasn’t,” she said, later adding, “I wanted to rewrite his choice of violating me. I wanted it now to be my choice, and he also had something that I wanted, which were drugs. I ended up getting high.” At one point, Lovato revealed she called the dealer and told him, “I’m going to f*ck you.”

Looking back, Lovato wishes she didn't turn back to drugs again. “I thought, ‘How did I pick up the same drugs that put me in the hospital?'” she shared. “I was like mortified at my decisions.”

In a March 16 interview with the New York Times, Lovato said she woke up legally blind following her 2018 overdose. According to the NYT, "It took about two months to recover enough sight to read a book, and she passed the time catching up on 10 years’ worth of sleep, playing board games or taking a single lap around the hospital floor for exercise." Per Glamour, the former Disney star can no longer drive and "has tinnitus, often associated with hearing loss."

Lovato told Glamour she's done with most drugs, though she's no longer completely sober from alcohol or marijuana. “A one-size-fits-all solution [for substance abuse] does not work for everybody,” she said.

Dancing With The Devil airs on Lovato's YouTube channel on March 23.

If you or someone you know has an eating disorder and needs help, call the National Eating Disorders Association helpline at 1-800-931-2237, text 741741, or chat online with a Helpline volunteer here.