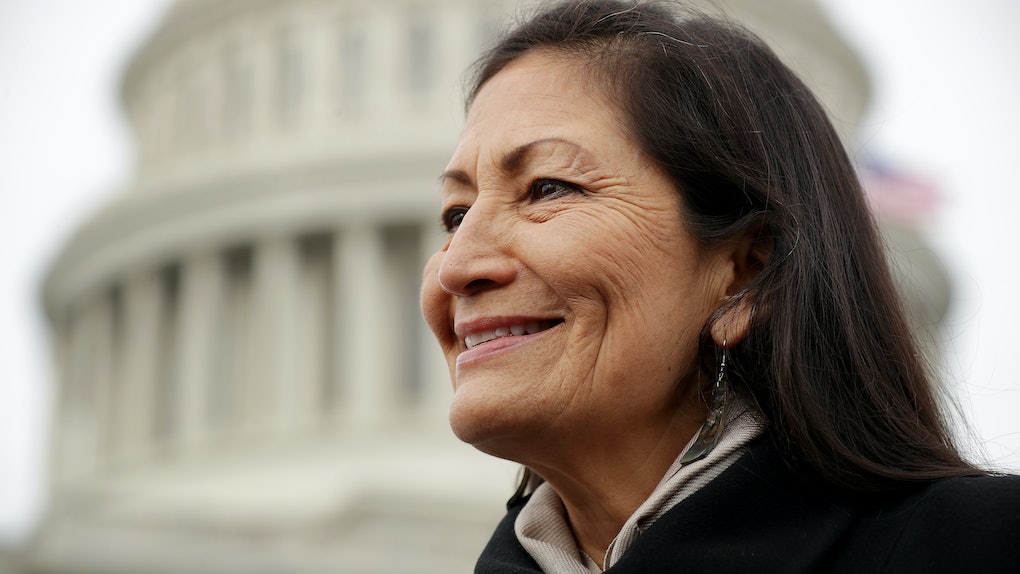 On Friday, Jan. 18, 2019, both the Indigenous Peoples March and the March for Life took place in Washington D.C. In a video recently posted to Twitter, a March for Life crowd is seen apparently mocking an indigenous man during his peaceful demonstration. People have started reacting to the footage, and in a tweet on Saturday, Jan. 19, Deb Haaland condemned crowds apparently mocking the Indigenous Peoples March as "heartbreaking."

UPDATE: An extended video of the exchange between Phillips and the students was released on Sunday, Jan. 20, per Business Insider, apparently showing the lead-up events to the clip that went viral over the weekend. Per CNN, Nick Sandmann, a junior at Covington Catholic High School who was featured in the video, released a full statement on Jan. 20, regarding the events of the exchange.

EARLIER: A video posted by Twitter user @2020flight on the day of the marches seems to show an apparent March for Life participant, who appears to be a minor, wearing a MAGA hat purportedly mocking an elderly indigenous man who was appears to have been a part of the Indigenous Peoples March demonstration. In the video, the minor appears to invade the man's space while smirking as a crowd joins in, mocking the man's chanting demonstration. In another video posted by lulu_says2, an entire crowd of young people and adults are shown apparently mocking the man from a wider angle.

According to indigenous news source Indian Country Today, the elder man in the video is reportedly Nathan Phillips from Omaha, Nebraska. Per the publication, he's a former director of the Native Youth Alliance and a Vietman War Veteran who also apparently holds an annual ceremony honoring indigenous veterans in the Arlington National Cemetery.

Rep. Deb Haaland (D-NM), one of the first two Native American women elected to Congress (the other being Rep. Sharice Davids (D-KS), responded to videos of the incident on Saturday, Jan. 19, with a tweet condemning the crowd. She wrote:

This Veteran put his life on the line for our country. The students’ display of blatant hate, disrespect, and intolerance is a signal of how common decency has decayed under this administration. Heartbreaking.

Phillips spoke on camera after the incident and described what he heard from the crowd that had gathered around him. In a video posted by @LeMeTellUSumtin on Twitter, he describes his experience during the march, his beliefs, and what he hopes for the crowd that surrounded him.

When I was there singing ... I heard them saying 'build that wall, build that wall.' You know, this is indigenous lands. We're not supposed to have walls here, we never did ... before anybody else came here. We never had walls. We never had a prison. We always took care of our elders, we took care of our children. We always provided for them ... we taught them right from wrong.

At the end of the video, Phillips shared that he wishes the energy of the young men from the crowd could be redirected toward "making this country really, really great," like helping those that are hungry.

The March for Life participants were reportedly identified as students from Covington Catholic High School in Kentucky, according to The Cincinnati Enquirer. The school's website also notes that students would be joining the 2019 March for Life on Friday in D.C. Laura Keener, the communications director with the Roman Catholic Diocese of Covington, released a brief statement about the incident on Saturday, per The Cincinnati Enquirer, in which she said, "We are just now learning about this incident and regret it took place. We are looking into it." Elite Daily reached out to Covington Catholic High School for further comment on the matter, but did not hear back at the time of publication.

Covington Catholic HS is a school of the Diocese of Covington, not @CatholicCincy. From what we know, which is very little, the incident at the March [for] Life was unfortunate & regrettable. We are confident they will respond appropriately [to] make this an important teachable moment.

Watching the video is as "heartbreaking" as Haaland describes in her tweet, and I can only hope that whoever the agitators are in the video come forward with an apology following this "teachable moment."