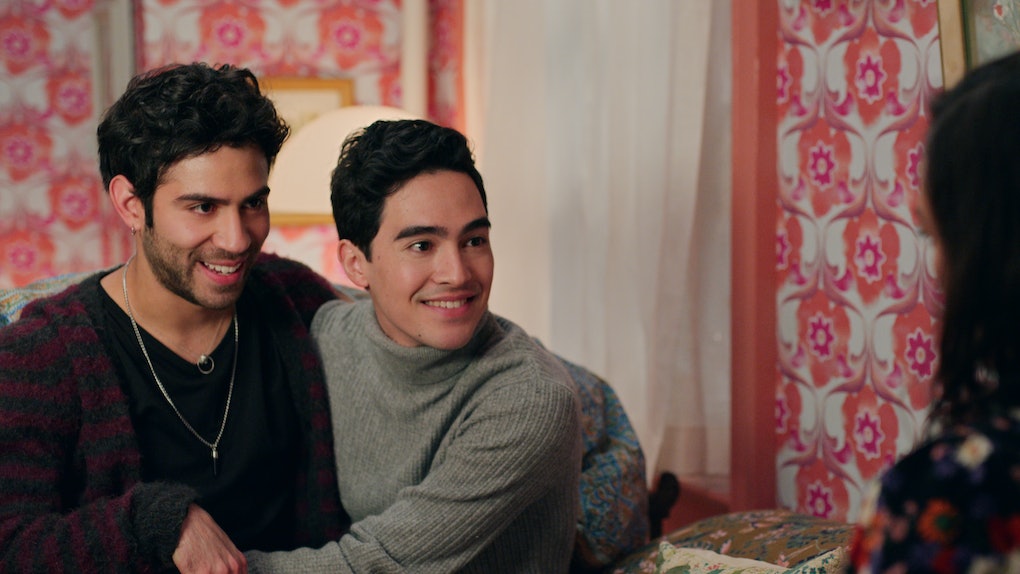 In Netflix's latest holiday series Dash & Lily, Christmas and love are totally intertwined. Lily (Midori Francis) attempts to find the boy of her dreams just in time for Christmas by leaving a notebook in a New York City bookstore, which Dash (Austin Abrams) finds. They embark on a whirlwind romance through the city, but they're not the only ones to find love. Lily's brother Langston also has a holiday romance, and the actor who plays Langston, Troy Iwata, hopes LGBTQ+ fans of Dash & Lily are inspired by his character's story.

Warning: Spoilers for Season 1 of Dash & Lily follow. TBH, the whole plot of Dash & Lily happens thanks to Langston. He's the one who inspires Lily to create a scavenger hunt for her potential suitor, setting up her journey with Dash throughout New York City and the holiday season. At the same time, though, Langston is beginning a new relationship of his own, with boyfriend Benny (Diego Guevara), while still healing from a tough breakup with an ex.

Unlike many LGBTQ+ storylines in this genre, Langston's story isn't about him coming out or coming to terms with his identity. Instead, it's just about the normal trials and tribulations that anyone goes through when finding love. This sort of normalizing depiction of LGBTQ+ relationships is exactly why Iwata was drawn to this role.

"I think I was most excited about playing a queer character who isn’t going through a self identity crisis to accept themselves," Iwata tells Elite Daily. "Langston is this wonderful character who’s unapologetically himself, and his queerness is not questioned by him. It’s not questioned by his family or friends. He just sort of exists, and I think that’s a really important message of hope to send to, specifically, a younger generation of the queer community."

LGBTQ+ representation isn't the only way Dash & Lily brings diversity to the holiday genre. Lily and Langston are part of a mixed-race family; they're Japanese-American on their mom's side and white on their dad's side. The series celebrates their heritage with specific holiday celebrations, such as a New Year's visit to the shrine and otoshidama, the tradition of children receiving envelopes of money to ring in the year. Iwata is hopeful these touches are another way audiences will feel represented by his character.

"I think our show represents a lot of different kinds of people from different cultures and different backgrounds and different identities," he explains. "I think it’s impossible for any one movie or TV show to represent every kind of individual that exists. But I am proud to be part of a show that is part of that step towards progression when it comes to representation."

As fans watch Dash & Lily, Iwata thinks they'll be happy to see versions of themselves on screen. "I hope that a lot of younger queer kids and younger mixed kids and people from other backgrounds see themselves in our show through this lens of this nostalgic, warm holiday feel," he says.

As for his character's storyline, Dash & Lily hasn't been picked up for a Season 2 yet, but Iwata is optimistic about the future of Langston and Benny's story.

Fans will just have to hope they get to see more of Iwata's Langston in future episodes.