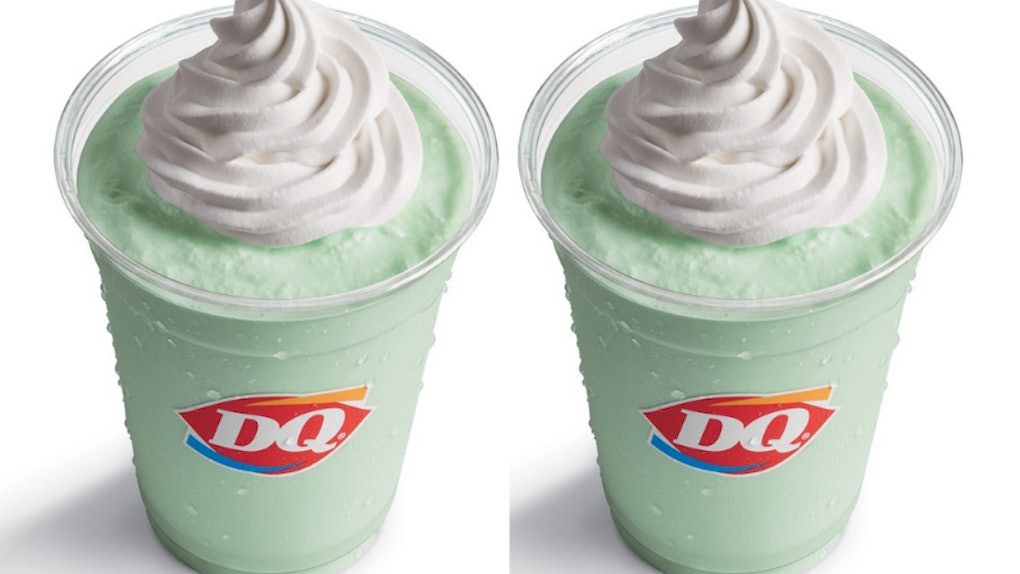 Never mind the fact that a good majority of the country is experiencing subzero temperatures, there's a new milkshake in town that you need to know about. I know, this polar vortex is no joke and the last thing you probably want to eat is ice cream. Dairy Queen's new Mint Shake may just have to be the exception to the frozen blast of air. The refreshingly sweet shake is here to fire up your taste buds. You definitely want to bring your warmest mittens for this one.

As I sit buried under a pile of my favorite couch blankets trying to stay warm, all I can think about right now is Dairy Queens new Mint Shake. I first saw the news on Chew Boom, a website that reports on the latest food trends, and knew I had to learn more about Dairy Queen's Mint Shake. The creamy green treat is available at participating locations nationwide, per the product listing on the chain creamery's website. There are 4,503 Dairy Queen stores in the U.S., so you shouldn't have too much trouble finding a nearby location.

The base of the milkshake is Dairy Queen's signature creamy vanilla soft serve, according to the fast-food company. The smooth vanilla flavor is blended with milk and mint syrup for a refreshingly cool finish. I'm a firm believer that no milkshake is complete without a dollop of whipped cream on the top, and Dairy Queen's Mint Shake is no exception to the rule. What sets this frozen beverage apart from other fast-food milkshakes is that it's blended by hand. That little extra TLC from Dairy Queen really makes this one something special.

Again, I know ice cream likely isn't at the top of your list of foods you want to eat this week (same here). But, the color of the milkshake reminds me of spring and that alone is enough to pique my interest in this frozen drink. The color isn't really a deep green, but more of a pastel green just as you might imagine a mint-colored shake to be. When I saw Dairy Queen's new Mint Shake, one of the first things that came to mind is McDonald's' popular Shamrock Shake. The shakes are pretty similar. Both are flavored with mint and vanilla ice cream and are almost identical in color. Although, the Shamrock Shake is slightly greener and more vibrant in color than the Mint Shake.

According to Chew Boom, apparently, Mint Shakes have been a thing at Dairy Queen for quite some time. The website reports that Mint Shakes were once a secret menu item at Dairy Queen, you've just got to ask for it. Who knew? Not me. I love a good secret menu item, though. If true, I guess there must have been quite a few requests for Dairy Queen to bring this one out of the shadows. Either way, I love mint ice cream. I'm not against adding in a few Oreos or other chocolate mix-ins to customize this Mint Shake to my taste buds, either.

It's not clear how long Dairy Queen's new Mint Shake will be sticking around for. Hopefully, this shake at least stays until St. Patrick's Day on March 17.