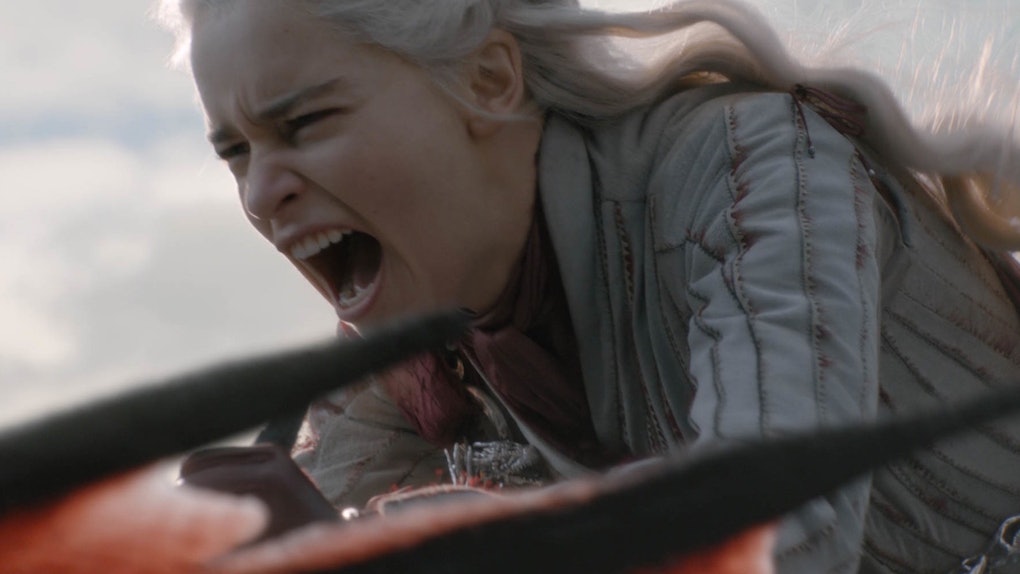 Daenerys' Vision Of The Throne Room Came True On 'Game Of Thrones,' So Refresh Your Memory ASAP

A vision seven years in the making finally came to its full realization on Sunday, May 12's new episode of Game of Thrones. After a particularly bloody episode of HBO's fantasy epic, fans saw a certain prophecy from earlier in the series come to fruition. Spoiler alert: This post contains spoilers from Game of Thrones Season 8, Episode 5, "The Bells." Daenerys' vision of the Throne Room came true on the show's most recent episode, and but it spells a much different future than fans thought back when the vision was first shown.

The vision occurred during the finale of the second season of Game of Thrones, "Valar Morghulis," as Daenerys wanders through the House of Undying in Qarth to retrieve her captured dragons. While inside the mystical chambers, Daenerys is struck with visions of her deceased husband Khal Drogo, the Haunted Forest, and most pertinent for this latest episode, a demolished version of the Throne Room in King's Landing with a light-colored powder falling through the eradicated ceiling. Fans have long-debated the meaning of this prophetic vision: could the powder be snow, representing Jon Snow's ascent to power, or could it be ash, which would represent Daenerys'? Well, the May 12 penultimate episode ahead of the series finally clearly proved that the powder from that vision was indeed ash.

Although fans did not actually see Daenerys step foot into the actual Throne Room in Episode 5, the Throne Room prophecy was clearly fulfilled by how the Targaryen queen destroyed all of King's Landing. Although Daenerys could have had an easy and relatively harmless victory over Cersei Lannister once the King's Landing bells rang, signifying surrender, Dany instead became overcome with rage and ordered Drogon to incinerate the entire city.

The incarnation of the House of Undying prophecy becomes clear in the immediate aftermath of Drogon's assault on the city: the few survivors rise up to see all of King's Landing covered in a thick layer of ash, similar to how the Throne Room looked in Dany's vision. It is in this moment that the meaning behind the prophecy became clear: Dany would finally make it to the Iron Throne, but only by destroying the entire city to get to it. Another important element of the vision is that Daenerys is alone in the Throne Room, which mirrors how Dany went rogue to destroy King's Landing, even putting her own allies in danger of Drogon's fire. As the vision showed all the way back then, Daenerys is only able to reach the Iron Throne alone, having turned on everyone that she once called an ally to embrace a path of ashy doom.

This also seems to foreshadow how the entire series will end in the finale episode next week, May 19. The teaser for the May 19 finale episode shows Daenerys standing tall as the new queen of Westeros, but she is alone and King's Landing lays in waste before her.

It seems evident that Daenerys will have to face the consequences of her deadly actions in the series finale, and might even meet her end because of them. Fans will find out once and for all who wins the game of thrones when the Game of Thrones series finale airs on Sunday, May 19 at 9 p.m. ET on HBO.