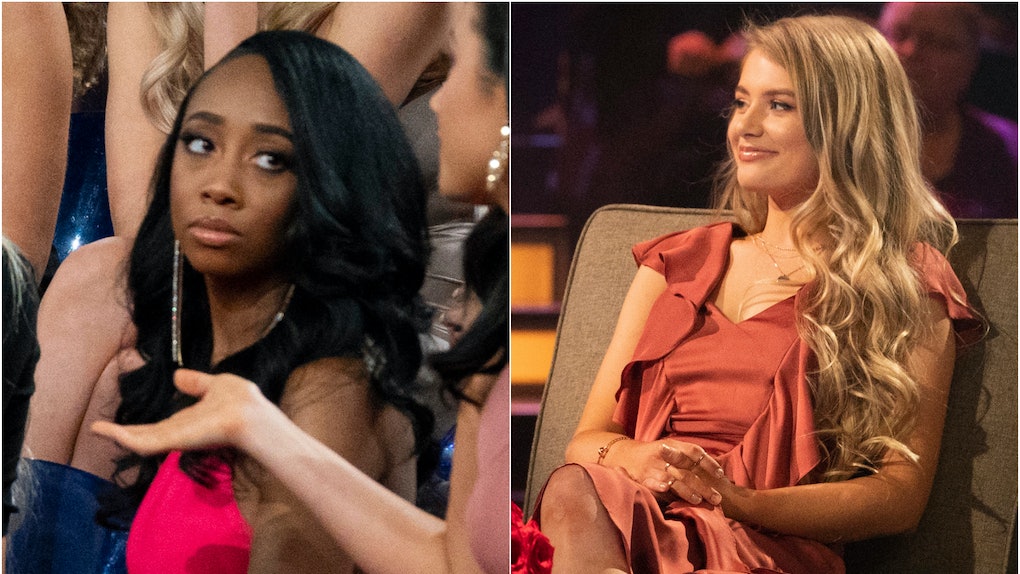 It isn't a successful "Women Tell All" episode of The Bachelor until one of the season's most quotable contestants gets her time in the hot seat. For Season 23, viewers were waiting for spitfire Demi to make one final lasting impression before they inevitably see her rule the beach on Bachelor in Paradise this summer. It looks like Demi will begin her summer in Mexico with an enemy in tow, because Courtney and Demi's fight on "Women Tell All" took a childish turn that's perfect for the summer series.

ICYMI, the otherwise low-key Courtney clashed with the bold Demi early in the season. After opening up about essentially living like a soccer mom in her Atlanta hometown, 23-year-old Courtney expressed a dislike of how Demi latched herself onto Colton during a group date. Courtney struggled with not getting enough time with the Bachelor, but Demi advised her to be more aggressive in her approach to receiving a private moment. This wasn't necessarily bad advice, but Courtney also made a fair point when she pointed out that Colton showered other women with praise but hesitated in complimenting her.

OK, so the guy really stunk at trying not to give away who his favorites were. This isn't a new Bachelor concept, but Courtney refused to listen to Demi's take and clapped back when the Texan stole Colton away for even more time during the date. She called Demi out for lacking class and maturity, sending Bachelor Nation into a conflicted state about who was exactly right in this situation. If anything, it proved that fans weren't always correct in judging Demi's intensity so poorly.

By the end of that episode, Courtney was eliminated. But when she reunited with Demi at "Women Tell All," she had a bone to pick with her. Before Courtney was cut from the competition, Demi called her the "cancer of the house," definitely fueling Colton's decision to send her packing. On March 5's episode, Courtney still wasn't over Demi's insistence that she be more aggressive in her pursuit of the Bachelor.

After a highlights reel of the season's fights reminded the group of their feud, Courtney clapped back at Demi immediately. Chris Harrison had to intervene, putting the fight on hold before letting Courtney air out her issues. When the conversation resumed, Courtney accused Demi of always acting like a child and turning their private disagreements into spectacles.

Demi then claimed that Court wanted her to turn down her personality throughout the season and that she was still too timid to talk to Colton. Courtney then fixated on Demi's "cancer of the house" remark, and while Demi admitted the term was extreme, she changed the term to "bedbugs." Ouch, not much better.

Their back-and-forth about their old argument during the "Women Tell All" taping was so heated that Courtney whipped out a pacifier — yes, a binky — and shoved it in Demi's face, telling her to go into "timeout." Welp, somebody just crafted the perfect Paradise intro!

The fight didn't exactly reach a resolution other than the near guarantee of seeing these two unite on Bachelor in Paradise. Fans on Twitter already have their calendars marked for that reunion.

We still may be in the dark about who our next Bachelorette is, but it's nice to know that we can certainly count on seeing an entertaining thing like baby-themed fights soon. I'll be counting the days until Paradise!