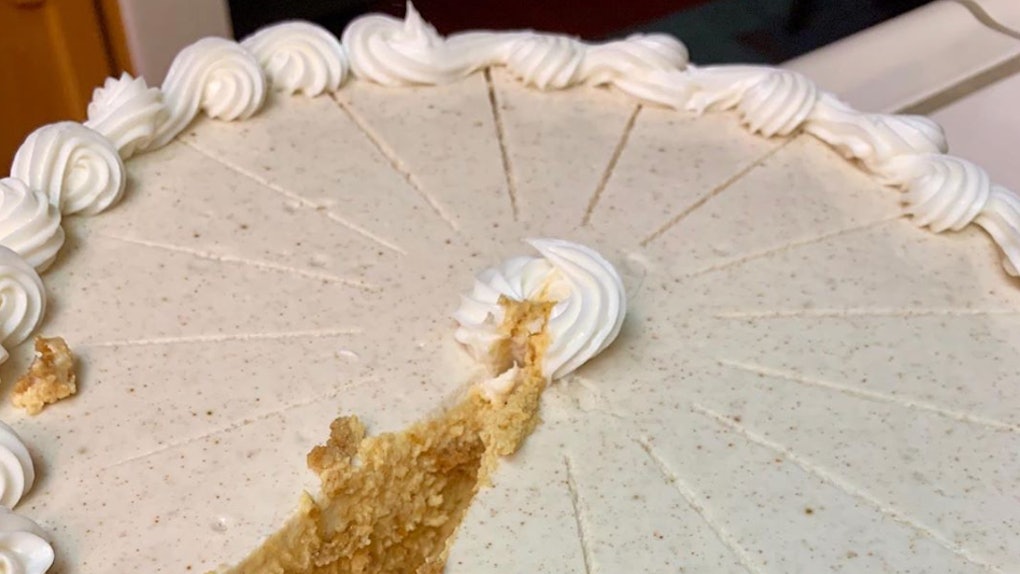 You might have a peppermint mocha in your coffee cup, but you don't have to say goodbye to pumpkin goodies just yet. In fact, Costco’s five-pound Pumpkin Cheesecake is officially back, meaning you can expect to dig into 16 slices of creamy, decadent goodness following your Thanksgiving meal. Whether you're planning to feed a big group of hungry relatives or you're in charge of dessert for Friendsgiving, you can't go wrong with this bad boy.

Costco devotees might remember the giant pumpkin-flavored cheesecake had become somewhat of a holiday tradition before the retailer apparently replaced it with a Harvest Spice Cheesecake last year. While it was pretty similar to the original, it had a slightly different flavor profile with a filling of sweet potato and pumpkin as well as a brown sugar topping, according to BestProducts.com. Of course, pumpkin pie is a classic Thanksgiving dessert, so stans of the OG sweet were pumped to learn the cream cheese version of it is back in stores.

Instagram user @thecostcoconoisseur took to the social media platform to reveal that the 75-ounce confection had made its return to Costco stores. "IT’S BACK!!!!!The original, the iconic Kirkland Signature PUMPKIN CHEESECAKE!" the blogger wrote. "No sweet potato filler here - it’s ALL pumpkin!" Costco confirmed to Elite Daily that the oversized Pumpkin Cheesecake is back and available for a limited time in stores, but not online.

The $14.99 cheesecake weights in at about 4.69 pounds and features a sweet graham crust, a rich pumpkin cheesecake filling, and a topping of spiced sour cream. Nothing good lasts forever, and this decadent concoction will reportedly only be available for a few weeks, meaning you'll definitely want to snag one before Turkey Day comes around.

Meanwhile, Instagram blogger @whatsgoodatcostco took to the social media platform to gift hungry consumers a sneak peek at what the inside of the cheesecake looks like. From a first glance, it looks like a pumpkin pie that's been layered with a rich cream cheese frosting, and I'm drooling.

If you don't have a Costco membership but still need a nearly 5-pound pumpkin cheesecake in your life, Sam's Club is also bringing back its Member’s Mark Pumpkin Spice Cheesecake. The dessert, which first appeared in stores two years ago, is pretty similar to Costco's version minus the cream cheese — it's described as a "New York-style cheesecake that has scrumptious swirl of pumpkin and fall spices throughout and a sweetly spiced whipped topping finish." This cake weighs in at 72 ounces (or 4.5 pounds), and it's currently retailing for $16.48 online and in stores.

Both items are limited-time only buys, so snag yours before they're gone.