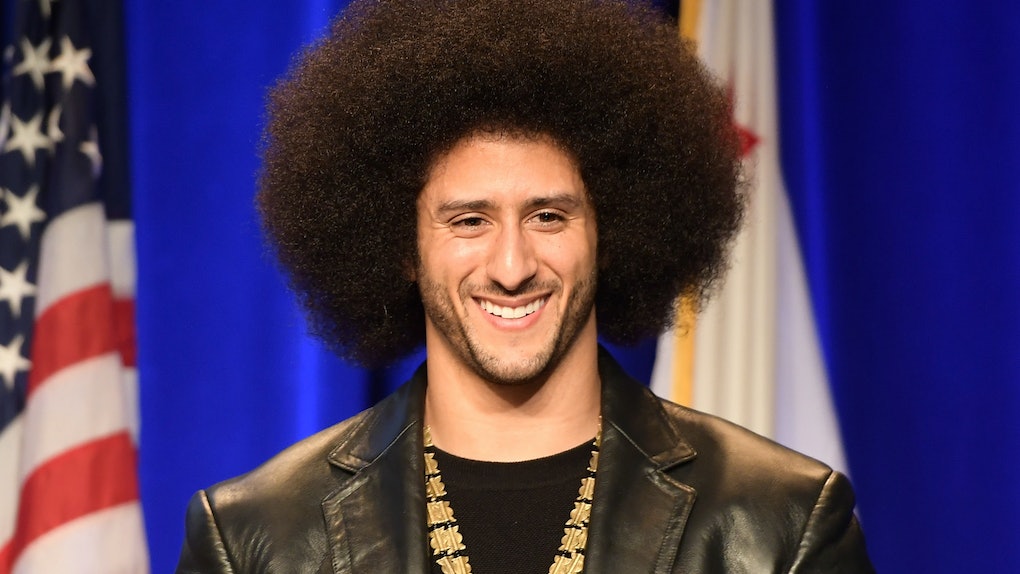 Colin Kaepernick was once best known for being a talented NFL quarterback, until his on-field activism took the spotlight. Due to the athlete's peaceful protests during the 2016 season, he hasn't been signed on to play for any team in the NFL. He has remained steadfast in his convictions, though, and Colin Kaepernick's Nike ad is a powerful reminder of it.

Kaepernick was a professional NFL quarterback for the San Francisco 49ers from 2011 to 2016, when his football career abruptly ended because he refused to stand for the national anthem. Kaepernick took a knee on the field, instead of standing for the song, as a way to bring attention to police brutality and racial injustices happening across the country. Some interpret kneeling for the anthem as disrespectful towards the flag and military, and as such, Kaepernick lost favor with team owners within the NFL. The former quarterback has been adamant that taking a knee means no disrespect to those who serve, but instead functions as a call to attention against police brutality and racial profiling.

Now, Kaerpernick has a second act as the face of a movement to fight against social and racial injustices of all kinds, and Nike is hopping on board. 2018 is the 30th year of Nike's "Just do it" slogan, a motto which encourages not just athletes, but people everywhere, to summon strength and do what they believe in. Nike's new campaign features Kaepernick and other athletes, such as Serena Williams, in emotional spots that highlight the obstacles they've overcome to achieve success.

Kaepernick's rendition of the ad features a close-up, black-and-white picture of the former QB with the text, "Believe in something. Even if it means sacrificing everything." The bottom of the photograph has Nike's swoosh symbol on the brand's motto, "Just do it."

Since dropping on Sept. 3, there's been a significant amount of backlash against Kaepernick's ad, with some people actively destroying their Nike merchandise. On the other hand, Nike has seen the spot garner significant media attention within a short time period. "In less than 24 hours since Kaepernick first revealed the spot on Twitter, Nike received more than $43 million worth of media exposure, the vast majority of it neutral to positive," reports Bloomberg via Apex Marketing Group.

While Kaepernick's photo has been the most controversial, other well-known athletes, including Serena Williams, LeBron James, Lacey Baker, Shaquem Griffin, and Odell Beckham Jr. are also part of Nike's new campaign.

"It's only a crazy dream until you do it," reads Williams' post from Nike. The tennis star also added, "Especially proud to be a part of the Nike family today," to show her support for Kaepernick.

"Thank you @Nike for a bold and courageous move. The term 'Just do it' has taken on a much greater meaning! #SupportNike," tweeted a fan of the ad.

"Everybody wear Nike. This is incredible. #supportnike #supportkaepernick," posted another ally. Both of these hashtags are popping up all over social media.

This user may get her wish because The New York Times actually reported that Nike will produce apparel with Kaepernick, and donate some of the proceeds to his "Know Your Rights" campaign.

"So glad to see @Nike standing up for freedom and justice FOR ALL with their 30th anniversary campaign!" This twitter user pointed out the fact that Kaepernick is merely fighting for equal freedom and justice under the law, nothing with which the constitution would disagree.

For every new Nike protestor, the other side of the debate shows supporters of the brand.

Whether or not you agree with Kaepernick's activism, it's interesting to see a brand like Nike take a divisive stance with its advertising. While some may regard Kaepernick's spot as an attempt to profit off social justice, the campaign as a whole reflects individuals triumphing over their individual circumstances. Inspirational indeed.