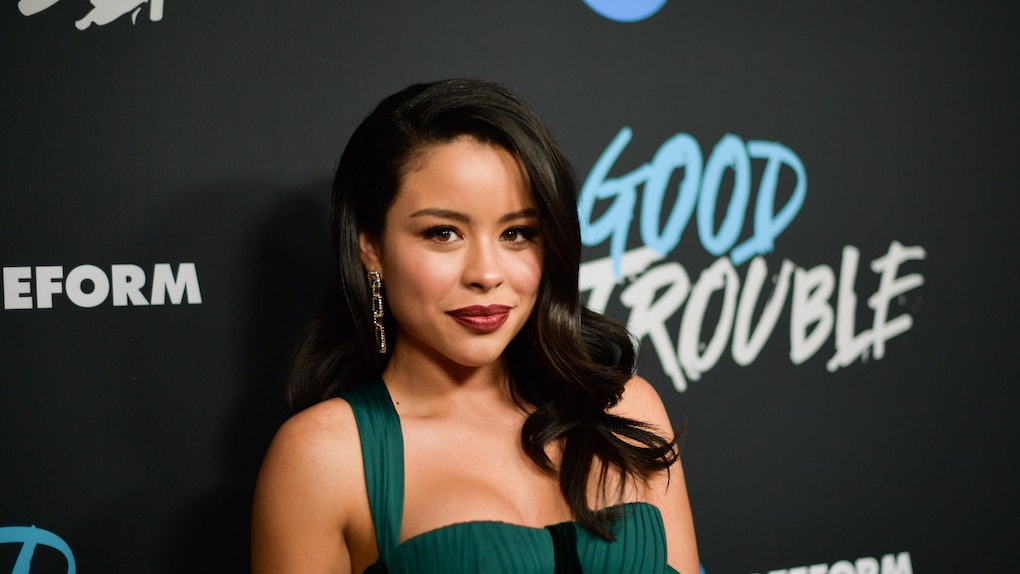 If you've yet to hear the name Cierra Ramirez, then you should probably listen up, guys. The actress has had a handful of roles — such as playing Mariana Adams-Foster in the Freeform television series The Fosters, as well as reprising her role in the spinoff series Good Trouble — but it's her newest song that will make you Google her name ASAP. Do yourself a big favor and watch Cierra Ramirez's "Liquid Courage" music video, because it will make you feel empowered AF.

The video for the new single dropped on Thursday, March 14, which follows up the singer's single "Bad Boys" back in October 2018. The video for her song "Liquid Courage (Love Me Better)," features a sultry Ramirez rocking a number of ~lewks~, each one more seductive than the next. We see her through a rose-colored lens in one shot, and in an all-white pantsuit (with nothing else on under the blazer) in the next. The ultimate steamy moment, though, is when she and a very handsome man begin fencing with each other — don't even get me started when Ramirez's weapon successfully touches her opponent. Full. Body. Chills.

Do yourself a favor and watch the video for "Liquid Courage (Love Me Better)" below:

Now do you see what I'm saying?

It's a sexy, pop-centric track and incorporates some Spanish lyrics throughout the verses, making the track too irresistible not to play on repeat.

Are you addicted yet?

Ramirez spoke with Billboard about the release of her new single, and how excited she is to share the track with her fans.

"I couldn’t be more excited to share my new single, 'Liquid Courage,' with the world!" she said, adding, "I haven’t released music in quite some time, so it’s really fulfilling. The song is another step forward for me as an artist. I love the feeling and vibe...I hope people love it as much as I loved making it."

I think I can speak on behalf of everyone and say that we are definitely loving it.

While the actress has delved into the music realm before, she told Entertainment Tonight back in January 2019 that the next chapter of her life has a lot more music in store.

"I’m becoming very comfortable with who I am, and what that means," she told the publication. "I’m taking it day by day, just to find out the person who I'm going to be. I'm just ecstatic about it and just very positive about the future."

She then told Entertainment Tonight that she was working on an album that would be about "love, life, and everything in between." She said,

I'm really excited about my new project because I think it is a side that people have never seen of me. It's a lot more personal this time and I'm excited. I’m 23 and I feel like I have some stuff to say for sure. I have a whole body of work. I’m kind of in the process of deciding what makes it and what doesn’t. I'm really, really excited. It's a lot different than the stuff I put out before, it's a lot more pop urban.

I don't know about you, but I'll be keeping my eyes peeled for more music from this super talented starlet.