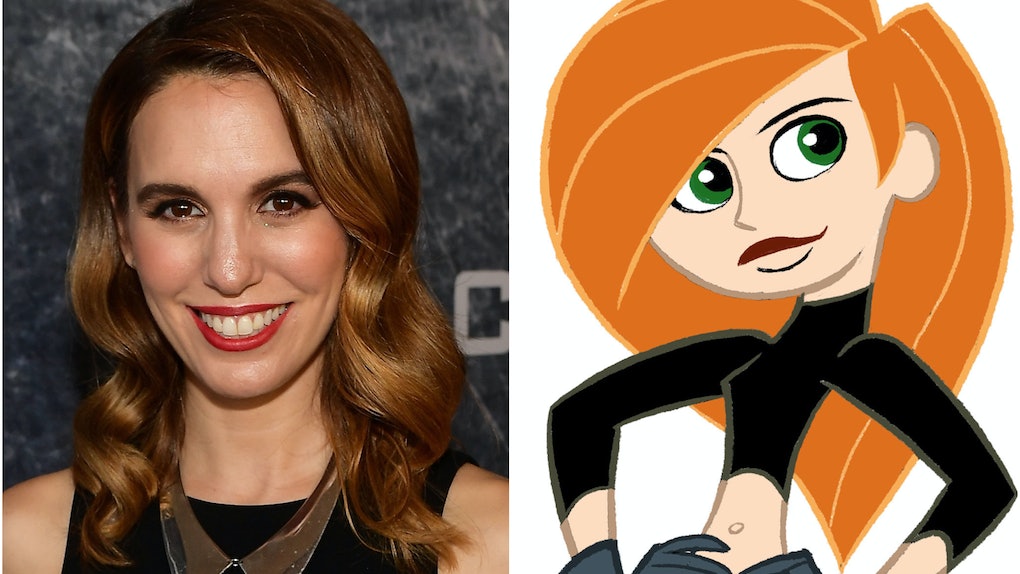 Call her, beep her, and Christy Carlson Romano will probably still answer to any messages meant for Kim Possible. The former Disney star voiced the teen spy in the network's original animated series in the early 2000s, but you won't find her playing an adult Kim in Disney Channel's upcoming live-action TV movie about the titular character. Instead, Christy Carlson Romano's live-action Kim Possible character pays tribute to the cartoon in a special way. So, what's the sitch with her role?

Romano, now 34, was a Disney Channel mainstay in the 2000s, appearing as big sister Ren on the sitcom Even Stevens and leading the voice cast of Kim Possible from 2002 to 2007. In April 2018, Romano appeared alongside Will Friedle, the original voice of Kim's best friend Ron Stoppable, in a video pretending that they were auditioning for the roles in the live-action movie, but this isn't that kind of reboot. Romano and Friedle gave Kim Possible's new BFF pair Sadie Stanley and Sean Giambrone their stamp of approval in the video, and while we might have to adjust to a new version of "Naked Mole Rap," we can expect a glimpse of Romano in someone else's shoes.

When Kim Possible premieres on Disney Channel on Feb. 15, keep an eye out for Romano as Poppy Blu, a famous pop star who's friends with Kim. The character didn't appear in the original series, but Romano's casting is a special nod to the show's tendency to recruit famous actors for guest roles. If you thought Hannah Montana hiring Dolly Parton and Brooke Shields was big, Kim Possible once worked with the likes of George Takei and Debbie Reynolds to bring fun characters to life. While Patton Oswalt reprises his television role as Professor Dementor in the movie, Romano is the only other original cast member attached, so it's fitting that she appear in a more subtle way like other legends did in the TV show.

People's first look photo of Romano as Poppy has her dressed appropriately in all blue, and Romano worked with the role as if the movie could lead to more films or a new TV show. "I’m going to be very transparent in that I hope Poppy Blu comes back," she told Entertainment Weekly. Romano also said of the character:

I’m here to pick Kim up because Kim doesn’t have a driver’s license. She doesn’t have her driver’s license, but she needs to get rides from the Marines or famous people, if you remember, to get to her missions. Kim is just like every teenager, but she happens to know some really important people, and Poppy Blu happens to be one of those important people.

After dropping her off somewhere, will Poppy tell Kim, "Beep me if you wanna reach me"?

Romano also promised that the film will have plenty of nods to the TV series and include updated technology to fit a 2019 setting. Ron's pet mole rat, Rufus, will appear as a CGI figure and Kim has access to holograms for her work. Other than the subtle tweaks, the trailer for Kim Possible promises a classic spy story that disrupts Kim's normal life as a high school freshman. Villains Dr. Drakken (Todd Stashwick) and Shego (Taylor Ortega) are up to trouble again, prompting Kim, Ron, techie Wade (Issac Ryan Brown), and new friend Athena (Ciara Wilson) to work together to save the world.

It's a little too soon to hope for a sequel, but if Kim Possible herself seems to be on board, can Disney start working on another spy saga? Poppy Blu needs to help the kids on a mission!