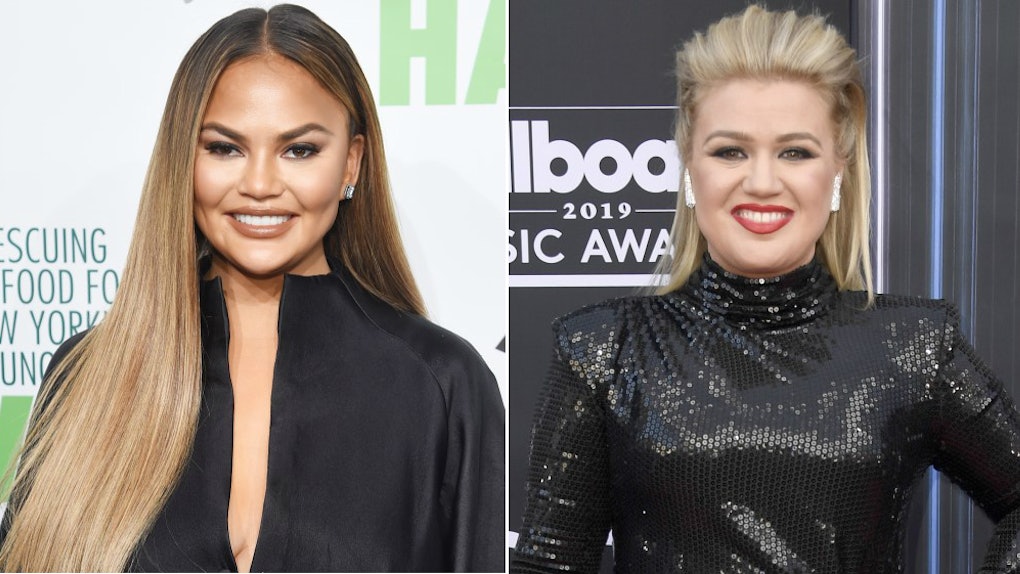 Kelly Clarkson has big plans for her 3-year-old son, Remington. In recent days, Clarkson revealed that she really wants Remington to grow up and marry John Legend and Chrissy Teigen’s daughter, Luna. The two apparently make such a good pair that Clarkson is already dreaming of what their future kids might look like. So, what do Luna’s parents think about this? Chrissy Teigen’s reaction to Kelly Clarkson wanting their kids to get married is the best.

In a recent discussion with Entertainment Tonight, Teigen revealed how she really feels about the idea of Luna marrying into Clarkson’s family.

"She has the most incredible family," Teigen told ET of Clarkson, who serves as a judge on The Voice alongside Legend. "Our kids and her kids hang out backstage at The Voice, and River [Clarkson’s daughter] is just such a little... she, like, runs my daughter. She's like, 'Here's what you need to do.' She's, like, taken over backstage because she's been there longer, and it's adorable to see."

I’m sure Clarkson would be thrilled as well. Clarkson told ET in recent days that she really wanted their kids to get married.

Sure, it’s a little strange to imagine your 3-year-old getting married to some other kid, but it seems like Clarkson just wants the best for her boy. And if Clarkson’s account of Luna and Remington’s friendship is any indication, then the two 3-year-olds have become close buddies on the set of The Voice. So, it makes sense that Clarkson would think they’d be a match in the future.

Clarkson also thinks they’d be perfect for each other because they’ve both grown up in the entertainment industry.

"I think it's fun to have other kids that kinda grow up in an environment... it's not normal. You know, it's not like an everyday scenario, like how we all grew up," Clarkson said of the kids. "So I like that they at least get people to hang out with every once in a while... with the same kinda vibe to where they don't feel weird."

So, basically, it sounds like Clarkson is just looking out for her son’s interests. It seems she wants her kid to marry someone of similar background and Luna, in her mind, makes a lot of sense.

Of course, the kids are way too young for any of this talk. It’s just too early to even know if they’d be compatible later on, but it’s cute that Clarkson and Teigen think they might be. With any luck, Luna and Remington will remain close friends for the long haul. A long-term friendship, in my opinion, is probably the best thing to aim for at this point. Hopefully, they keep in touch as they grow older.