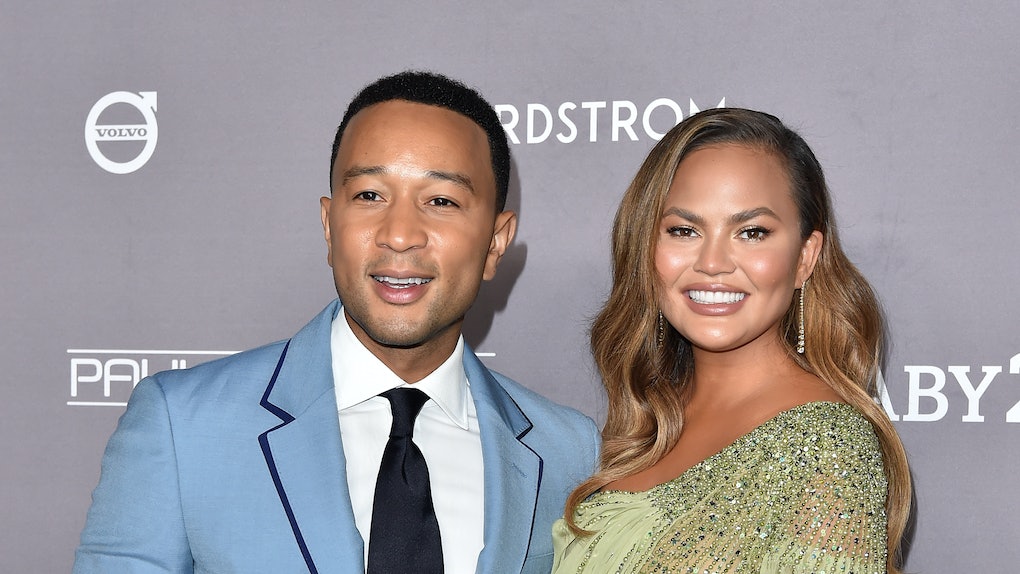 Chrissy Teigen's Clapback About John Legend's "Baby, It's Cold Outside" Remake Is Epic

I learned a long time ago, you don't mess with Chrissy Teigen or her husband, John Legend, or else you'll get major side-eye and an epic clapback thrown your way. Sharon Osbourne didn't get the memo, though, because she's the latest star to cross Teigen, and it's all over a Christmas song. On Nov. 7, John Legend and Kelly Clarkson released a remake of "Baby, It's Cold Outside," and Osbourne made it clear she wasn't a fan of the new lyrics. Teigen defended her husband's decision to remix the classic tune, and you know she couldn't do it without throwing a bit of shade. Chrissy Teigen's clapback about John Legend's "Baby, It's Cold Outside" remake is hilariously passionate.

On Tuesday, Nov. 20, Teigen appeared on The Kelly Clarkson Show to discuss the controversy surrounding Clarkson and Legend's "Baby, It's Cold Outside" remake. The pair changed the song's lyrics to make them less problematic after several radio stations pulled the original song last year for being inappropriate. While some interpret the original lyrics as a flirty back-and-forth exchange between a man and a woman, others believe the song's lyrics make light of predatory behavior.

On The Kelly Clarkson, Clarkson explained how her collaboration with Legend came about. "[Legend] had this idea. With the #MeToo movement they pulled ‘Baby, It’s Cold Outside’ from any radio, like a lot of radio stations at Christmas. Well, I love that song," Clarkson said.

The host revealed Legend loves the song as much as her, but because a lot of people didn't like the original lyrics, the pair changed them.

Unfortunately, their decision to revamp the lyrics was met with backlash from fans of the OG track. "We were just like, ‘Oh, let’s just give them another option,’ and, apparently, we killed Christmas," Clarkson quipped.

Teigen found the backlash amusing. “Sharon assumed you guys burned them all in the backyard or something and that they can never listen to the original ever again," Teigen said. "If I can’t have my creepy song, it’s not Christmas.”

Throughout the whole segment, Teigen kept giving the camera side-eye, which seemed totally directed toward Osbourne herself.

Watch the whole thing go down below.

While appearing on The Talk on Nov. 4, Osbourne was very adamant the original song was innocent and should have been left untouched. "To change an innocent lyric, to what is it, 'Your mind and your body?' What the hell are you on? That's ridiculous," Osbourne said.

Here's a solution: Listen to whatever version you like best.