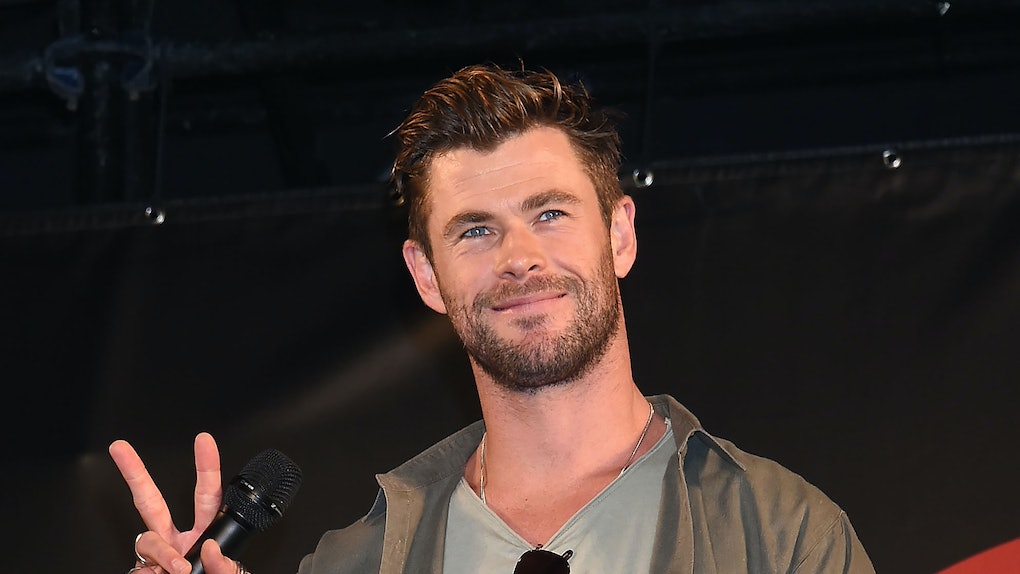 Chris Hemsworth is a man of many talents. Whether he's taking on the role of Thor in the Marvel Cinematic Universe or Agent H in the Men In Black franchise, Hemsworth nails his performance each time, proving again and again that he's a versatile actor and heartthrob for a reason. One thing Hemsworth isn't good at, however, is keeping up with the latest internet slang, including "thirst trap." Chris Hemsworth discovered what “Thirst Trap” means (just a week after his little brother, Liam Hemsworth, did, FYI) and his reaction was everything.

For those of you who don't know, according to Urban Dictionary, "thirst trap" is a "sexy photograph or flirty message posted on social media for the intent of causing others to publicly profess their attraction." With this in mind, both Hemsworth brothers fit the definition perfectly, with all their swoon-worthy selfies they often share on their personal Instagram pages. But, just like his brother, Chris had no idea about the meaning behind the phrase.

"Thirst trap? Thirst trap? What is that?" Chris wondered in a Dec. 9 interview with Refinery29. "Tell me, this is fascinating."

According to Refinery29, someone from Chris' team showed him a picture of his brother as an example. "Oh, so it’s like, you’re trying to play it down like it’s casual, but you’re doing like a...," Chris said, while pointing to his brother's picture. "Thirst trap. HAHA! OK. We’ll try to get more of those going," the actor promised.

For reference, this is the picture he was talking about:

Chris' discovery comes just one week after Liam learned the meaning behind "thirst trap" himself. It all started when Liam shared the picture above on Nov. 30. "@hemsworthluke captured this moment of me and my best friend Dora. Good god I love this dog," Liam captioned the photo.

Thousands of fans left flirty comments underneath his photo, like, "Hotness and cuteness in a single frame," and, "Such a handsome man."

Liam's celebrity friends even got in on the fun, including Rebel Wilson, who commented heart emojis, and Adam Devine, who wrote, "Thirst TRAP." That comment set off this whole situation.

Since Liam didn't know the definition of "thirst trap," the Isn't It Romantic actor did some research and wasn't disappointed about what he found. "I just googled thirst trap. 100% true ;)," Liam replied.

With both of the Hemsworth brothers being up to speed now, fans can probably expect more thirst traps from them in the future.