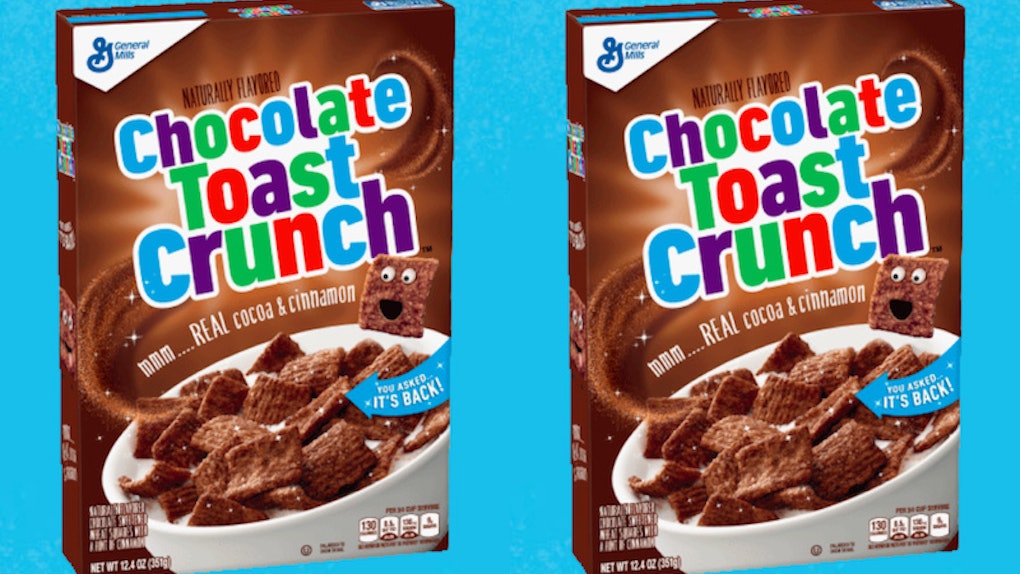 It's an exciting time for cereal enthusiasts, because one of their favorite flavors is finally on the shelves again. More specifically, Chocolate Toast Crunch cereal is back, which means it's time to re-stock your kitchen cabinets immediately. If you're a fan of Cinnamon Toast Crunch, you might remember its delicious cocoa counterpart (because I definitely do). If that's the case, you probably recall how it was discontinued a few years back. It was a total disappointment to Chocolate Toast Crunch lovers — but now, everyone who used to start their mornings off with the sweet selection can start doing it again.

Apparently, a lot of folks used to eat Chocolate Toast Crunch on the reg. In fact, so many people adored the cereal that a Change.org petition was once created to bring the General Mills product back. The petition passionately stated why the cereal should be reintroduced, saying, "Let us band together on this day and revive Chocolate Toast Crunch so that all may delight in its delicious, magnificent, and flawless flavors." According to a General Mills fact sheet emailed to Elite Daily, the flavor was even the number one most-requested cereal amongst other Cinnamon Toast flavors.

Apparently, General Mills listened to its fans — because as of Dec. 17, 2018, the flavor is back on the shelves.

That's right: According to General Mills, Chocolate Toast Crunch became available after a two-year hiatus at major retailers nationwide on Dec. 17, 2018. Therefore, you can finally purchase the chocolatey treat and enjoy it for breakfast, lunch, or dinner (or all three — I won't judge). Whether you're buying it for yourself or for your entire family, General Mills has you covered. Why? Because the flavor is available in a mid-size box for a suggested retail price of $3.99, and in a family-size box for a suggested retail price of $4.99. In other words, snacking on Chocolate Toast Crunch won't break the bank.

If you're new to the Chocolate Toast Crunch fad, you're probably wondering what the beloved cereal is made of. According to General Mills, the treat is made with real cinnamon and cocoa to pack a flavor punch with every spoonful. With that being said, you can probably assume that Chocolate Toast Crunch tastes like a chocolatey version of the OG Cinnamon Toast Crunch — and I cannot wait to dive into a bowl. If you're curious about the product's specific ingredients, check out General Mills' product page on CrazySquares.com.

If you're hoping to do the same, you can officially purchase both Chocolate Toast Crunch and Cinnamon Toast Crunch Churros at major retailers nationwide. It's safe to say that mornings are about to get much sweeter.